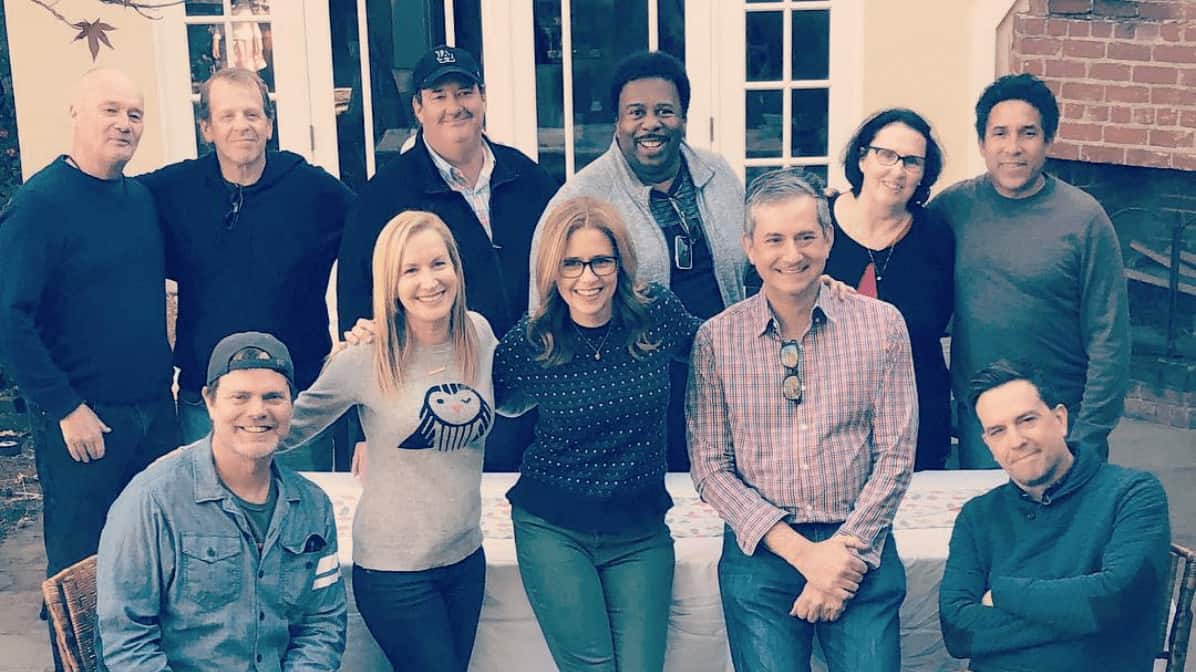 This weekend saw yet another log thrown on the “Office reboot” bonfire, with Angela Kinsey posting a photo of a low-key cast reunion on her Instagram. The picture was a delight in itself, with show creator Greg Daniels surrounded by Ed Helms, Jenna Fischer, Rainn Wilson and Kinsey, along with Creed Bratton, Paul Lieberstein, Brian Baumgartner, Leslie David Baker, Phyllis Smith and Oscar Nunez.

While the cast reunion was really just that, a reunion, it didn’t stop the internet from partaking in another round of speculation about The Office returning for more episodes.

Some of the old gang got together today… it was so great to see everyone! I turned to Ed and said, “I feel like we are at a family reunion.” He smiled and said, “We are.” ❤️ Thanks Greg for hosting! For those who couldn’t make it… you were missed!

The cast of The Office has had a lot of fun with reboot rumors over the years, but the joke was stretched a bit too far when Steve Carell hosted Saturday Night Live last month. Carell’s monologue was occupied largely by cameos from his fellow Office alums, and what might have been a nice opportunity for the actor to tap back into his comedic roots became a somewhat uncomfortable round of cast members begging Carell to do something he has repeatedly opposed.

“It was a great experience. I love all those people but I just don’t think it’s the best idea. I think maybe we should just leave it alone,” Carell said.

NBC hasn’t ruled out a reboot of The Office, and cast members from Jenna Fischer to John Krasinski have voiced enthusiasm for at least some sort of official on-camera special or revival. Bob Greenblatt, NBC’s entertainment chairman, has said he’s interested in exploring the project, but without the original cast.

At this point it’s sort of a tired conversation whether NBC should revive The Office. Right now, it seems more pressing to wonder what value these rumors have in the first place. On the one hand, we might be nearing an entertainment world that, with shows living forever on streaming and other digital services, is post-reboot. On the other hand, the appeal of the new will never go away.

The artsier-minded among us might argue that with the original Office able to be enjoyed any time on Netflix, new episodes would only distract creative talent from projects that give us more opportunities to be surprised and captivated by popular culture. More Office episodes likely would’ve meant no breakout from John Krasinski with The Quiet Place this year, and perhaps more Office would’ve lead to a world without two of the year’s better celebrity memoirs in Ellie Kemper’s My Squirrel Days and Jenna Fischer’s The Actor’s Life: A Survival Guide.

More than anything, it’s tough to see people like Steve Carell have their post-Office careers overshadowed by continual demands for a return to Dunder Mifflin. Carell’s done great dramatic work since ending his time as Michael Scott—Foxcatcher and Beautiful Boy and Way Way Back are all strong showcases for his range—but he can’t outrun calls for him to put on the (women’s?) suit again. These talks don’t give anything to these actors except bothersome questions, and they don’t really do anything for us except distract us from other great things.

We live in a world where if you miss The Office, you can watch it again anyway. The old days were indeed great, but a) a return doesn’t guarantee more greatness, and b) The Office had so much talent that to pool it all again would mean a diminishment elsewhere. We have The Mindy Project, BJ Novak’s One More Thing, The Good Place and Brooklyn Nine-Nine because there isn’t an Office anymore. So let’s leave this be. It’s not doing anyone any favors.

Here Are the Denominations that Drink the Most