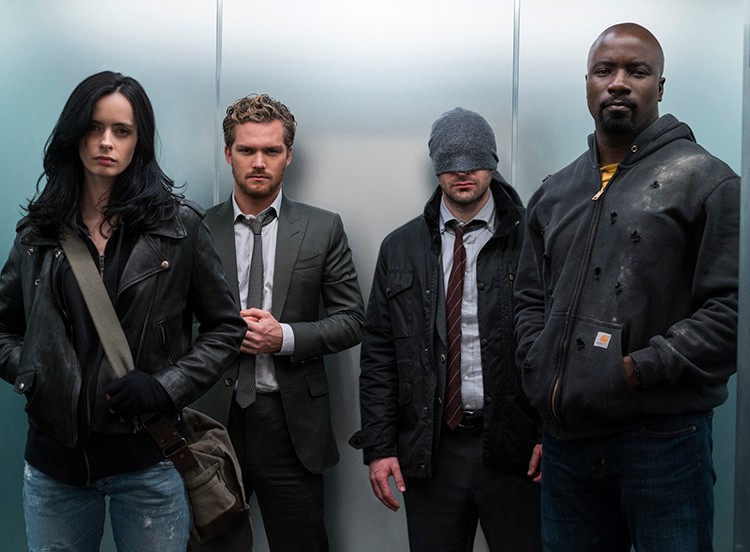 The opening scene in The Defenders features a martial arts master with a glowing fist and his katana-wielding partner defending a mysterious man from a super powered ninja in a fogged out Cambodian sewer tunnel, and things get substantially wilder from there. So you’ll probably be able to determine whether or not it’s the sort of thing you’re going to enjoy from the jump. Personally, I love it.

Marvel’s Netflix shows have all veered far more grim and moody than their big screen counterparts, and some have wrestled admirably with real societal issues like racism and misogyny.

The Defenders doesn’t abandon that, but it’s trying to be comic book-y fun in a way that its forebearers weren’t. It doesn’t always succeed, but it largely does, and goes a long ways toward restoring faith in a series that’s made some recent blunders.

While Marvel’s Netflix shows have ranged from stupid (Iron Fist) to sublime (Jessica Jones), one flaw all the previous entries shared is a pacing so deliberate it veered into dullness. Defenders’ showrunners Douglas Petrie (Buffy the Vampire Slayer) and Marco Ramirez (Orange Is the New Black) have clearly learned from those mistakes.

This show, which brings Daredevil (Charlie Cox), Jessica Jones (Kristyn Ritter), Luke Cage (Mike Colter) and Iron Fist (Finn Jones) together into one, street-level, super-powered team-up is a lean beast. At a slender eight episodes, a lot of the melodrama, flashbacks and wheel-spinning that hobbled the previous shows has been trimmed away here so it can get right to the good stuff.

The good stuff in question mostly concerns a mysterious aristocrat named Alexandra (Sigourney Weaver), who is consorting with a lot of the leftover villains from the other shows and is clearly up to something, though the show is mighty cagey about what.

You need look no further than Iron Fist for an example of how fatally the “villain-with-an-ambiguous-evil-scheme” trope can trip up a narrative, but it works well here, largely on the strength of Weaver. She’s found a nice late-career niche playing sinister villains and can add her performance to Marvel’s Netflix-verse roster of impressively memorable bad guys.

The first few episodes set the table with aplomb. We catch up with Luke Cage, who manages an early release from prison with the help of a lawyer who will be familiar to fans of these shows. Iron Fist is traveling the world with Colleen Wing (Jessica Henwick) taking out members of menacing magic ninja club The Hand. There’s Matt Murdoch, whose legal career is finally gaining some traction even as he’s retired from the superhero business following the events of his own most recent season. And finally Jessica Jones, who I’m happy to report is in the exact same place we left her, wrestling to both keep her private eye career afloat and hangovers at bay, and not having a lot of success with either.

Cox, Ritter and Colter remain interesting performers across the board. Colter’s a born star, with a magnetism that makes his good guy shtick much more compelling than it’d be in the hands of a less engaging presence.

It’s a treat to see Ritter return to the leather jackets, scarves and fingerless gloves again; her character isn’t quite like anything else on television, with furtive glances and desperate gambles revealing some worrisome cracks in her smart-alecky veneer. And Cox does a good job shouldering some of this series’ heaviest lifting, painting a compelling portrait of a man guilted into goodness by a tortured, Roman Catholic conscience that just won’t allow him to abide inaction.

That leaves Finn Jones’ Iron Fist. One of the big questions going in was how showrunners would deal with Jones, whose own show was a critical flop. While Jones’ performance still lacks the dexterity of his colleagues (some of the dialogue with Hardwick comes off particularly wooden), The Defenders makes some smart moves in how Iron Fist bounces off his new super pals.

Of particular note is his partnership with Luke Cage, which starts off begrudgingly and slowly moves to respect. Early on, Luke Cage calls Iron Fist out for failing to recognize the way his own privilege and apathy contributes to the crime and violence he wants to fight against. When Iron Fist argues that he’s trained to become a martial arts master, Cage counters with “you had power the day you were born.” After Iron Fist was rightly criticized for racial insensitivities, using the character’s well-established comic book friendship with one of Marvel’s most prominent black superheroes to directly confront systemic racism is a bold, smart move.

Another bold move was frontloading a lot of the side characters from these heroes’ respective shows. The danger with all these big superhero mashups is an overstuffed roster, but The Defenders has the benefit of being able to pull from four separate television shows with well-established tertiary characters to organically move its narrative forward.

What’s especially welcome is the number of non-white males in this cast. There’s Iron Fist’s aforementioned partner Colleen Wing, who was one of his show’s consistently non-bad things. Jones’ friends Tricia (Rachel Taylor) and Malcolm (Eka Darville) are on hand to assist her in a missing person investigation that starts to uncover a lot more than she bargained for. Murdoch’s former secretary Karen (Deborah Ann Woll) is chasing down leads in her new gig as a journalist. Luke’s police contact/sometimes romantic partner Misty Knight (Simone Missick) points him in the direction of some bizarre homicides. And of course, Rosario Dawson’s Claire Temple remains this mini-universe’s common thread and one of its more compelling features.

In an age where superhero franchises continue to struggle with representation, The Defenders refreshingly clears the Bechdel Test with ease and features a cast that looks nearly as diverse as the city the show is set in. That’s a welcome shift from the norm, and it serves the show well.

A Show We Need Right Now

At their best, superhero shows are about the extreme lengths we have to go to be a good person in difficult times. Iron Fist, Jessica Jones, Daredevil and Luke Cage may have some low-level super powers, but they’re still a more relatable breed of hero than the high-flying, whizz-bang glory hounds like Thor and Iron Man.

For the most part, the Defenders are just people who find themselves forced to the frontlines of dire circumstances. It’s not at all hard to imagine any of them just sitting the fight out and waiting for one of the a-listers to show up (indeed, a few of them try) or justifying actions of bad people to excuse their own apathy.

It’s not exactly a spoiler to say our heroes rise to the challenge (or, at least, they do in the first four episodes that were made available to critics). By showcasing the value of diversity, the necessity of good people standing up to evil, and the heroism that can come of banding together against injustice, The Defenders feels relevant in ways the creators couldn’t have predicted during its production.

You’ll find plenty of viewers—and even more critics—who say they’ve reached the point of superhero adaptation exhaustion, and I’m sympathetic to the fact that it’s just not everyone’s cuppa. But art mirrors culture and, currently, the United States’ most lucrative, popular artistic output is a genre that began as fanciful depiction of fighting Nazis, and has been dedicated to the notion that good people can fight back against wickedness ever since.

We could do a lot worse.