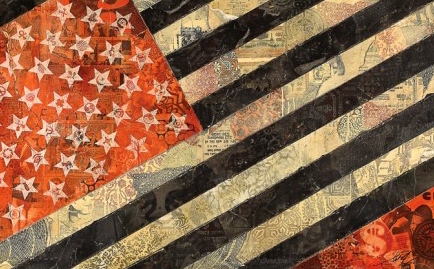 Editor’s note: On Saturday, Shepard Fairey introduced his new art exhibition, entitled Mayday, at the Deitch Gallery in New York City. We wanted to use the opportunity to take a look back at an interview we did with Fairey in RELEVANT.

It all started on a school bus ride when Shepard Fairey was in fourth grade. The son of two conservative South Carolina parents, Fairey attended a rigid private school, the kind where you have to wear a coat and tie every day. His class was on its way to a local museum—a highly anticipated field trip and an exciting break from the routine of the classroom for any fourth grader. As the bus drove through traffic, one of his rambunctious classmates flipped the bird to a passing motorcyclist. When the bus stopped, the motorcycle rider told the bus driver what the student had done. All of a sudden, everyone on the bus was pointing at Fairey.

"I said, ‘Hey, it wasn’t me. These guys were all around me. I was just sitting here,’" Fairey remembers. "They sent me back on the bus to the school to pick up garbage all day while everyone else got to go to the science museum."

That day something happened to Fairey—a distrust for authority and the establishment was sparked. It was a spark that would later ignite one of the most legendary rises to fame in the world of urban art.

"My lack of trust for authority or any attempt to homogenize—I always rebelled because I knew I had a conscience of my own, and I could figure things out outside of that."

Since the school bus incident, Shepard Fairey was becoming a somewhat mysterious celebrity. His artwork, screen prints that borrow imagery from Soviet-era war images and the ominous eyes of the late pro-wrestler Andre the Giant, was showing up on street signs, T-shirts and even billboards. Fairey, a skateboarder since childhood, pulled out ads in skate mags that offered free stickers to anyone who would pay for postage. All of a sudden, stickers and stencil-made posters were showing up at skate spots around the country, and Fairey’s ambiguous brand, Obey, began to claim quite the following.

"I got inspired by graffiti and street art to sort of take it to the street," Fairey says, remembering the early days of Obey. "And at first it was just wall stickers and putting them at skate spots and at stop signs and in clubs- anywhere in the right of way of people. I got more into it; I started making bigger images with posters and stencils and even taking a physical silk screen out onto the street and screening onto walls. It was very impractical but fun."

But the more his operation grew, the more ambiguous the actual meaning behind the images became, and as it turned out, that was kind of the point. While at art school, Fairey began to observe the agenda of mainstream art that had been adopted by corporations to sell products and push for services.

Fairey developed his own artistic calling card: the face of actor and professional wrestler Andre the Giant. The image eventually evolved into just the two eyes of the campy sports icon inside of a star with the words "Obey Giant" boldly printed underneath. Soon, Fairey developed variations of the image, incorporating it into some of his favorite artwork, much of it Cold War propaganda with simple colors and shapes accompanied by just one word: "Obey." Except, there was a major difference between his screen-printed posters, T-shirts and stickers and the mass-media images that were everywhere: With Obey, there was no product. The message was the image, meant to evoke thought and curiosity about art.

"Artists want to share all their complicated lives. There’s got to be something that is more direct and simple. So that was my strategy, and it started off as a goof-off, which even in and of itself is very liberating because of the lack of pretense of it."

Graffiti was a way to get his work outside the context of formal artwork, out of the gallery onto the street.

"It really happened [as a result of] going to art school and being in an incubated environment that was promoting art but realizing that it was a lot bigger of a challenge to affect people with imagery in the outside world," Fairey says. "It evolved into something that had more of a reflection of my political interests, sense of humor, social commentary, my sense of what was powerful art."

Obey expanded from just stickers and street art to T-shirts and posters which Fairey sold online. Soon, high-end boutiques and even mainstream department stores began to carry Obey gear, and what started as an underground movement exploded into a seemingly high-profile operation. And, of course, that’s not to mention that Fariey’s work was soon seen everywhere with his famous “Hope” poster in support of President Barack Obama.

"People were so used to being marketed to that when something showed up that didn’t have a product behind it, it kind of called the whole process into question," Fairey says. "At the same time, every artist wants to make a living from their art. To me it was a very acceptable canvas. It was logical to put my graphics on T-shirts as well as posters."

Despite his success, Fairey hasn’t forgotten his roots and the sense of rebellion that was instilled in him that fateful day on the way to the science museum. And every time someone encounters his work for the first time, those stale eyes staring from behind a mural, his mission—drawing into question what authority is and what conformity means—is furthered.

"My whole M.O. was very similar to skateboarding and punk rock, which was the idea that if the mainstream wasn’t picking up on what you were doing, create an alternative scene to the mainstream," Fairey says. "My idea was always, ‘Well, mainstream is kind of sucky a lot of times, but does it have to be?’ It would be cool to educate people about the stuff that I’m into. Sort of enlighten the mainstream—raise the bar all across the board rather than having to feel like an outsider forever."