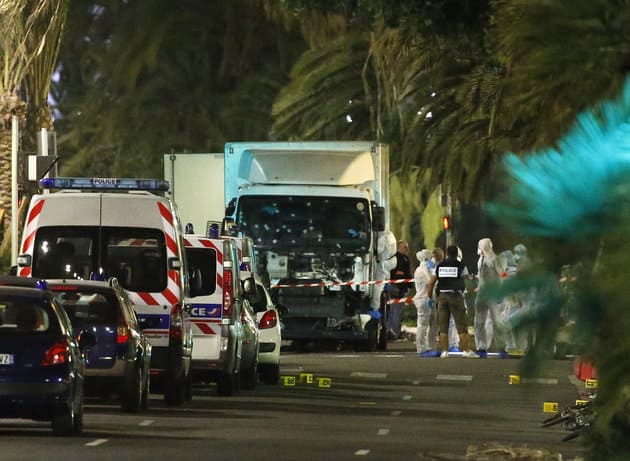 Last night, France suffered its third major terrorist attack in a year and a half.

During a celebration of Bastille Day in Nice, France, a man in a white truck plowed through a crowd of thousands of people for over a mile, killing 84 and injuring more than 100—50 of them in critical condition—, with a death toll that’s expected to continue to rise.

The crowd had just finished watching a fireworks show and had begun to disperse when the truck driver fired a shot from the vehicle before driving through the people and according to a witness, accelerating as he hit people.

Witnesses say that the truck zig-zagged through the crowd with its headlights off to inflict as much damage as possible, according to the Huffington Post.

“France has been struck once again in her flesh, on the 14th of July, on the day of our national celebration,” French Prime Minister Manuel Valls said. He added that the terrorist sought to “harm the very idea of national unity.”

“We stand in solidarity and partnership with France, our oldest ally, as they respond to and recover from this attack,” President Obama said in a statement.

The driver of the truck—identified as Mohamed Lahouaiej Bouhlel, a French-Tunisian man—was shot to death in a gun battle with police. Police had only noted him previously for charges of weapons possessions, but nothing terror related.

No organization has come forth to claim responsibility for this act yet.

France was scheduled to lift a state of emergency that had been put into place after the November attacks, then this happened. They will begin an official three-day period of mourning on Saturday.

How to Find Meaning in a Job You Hate