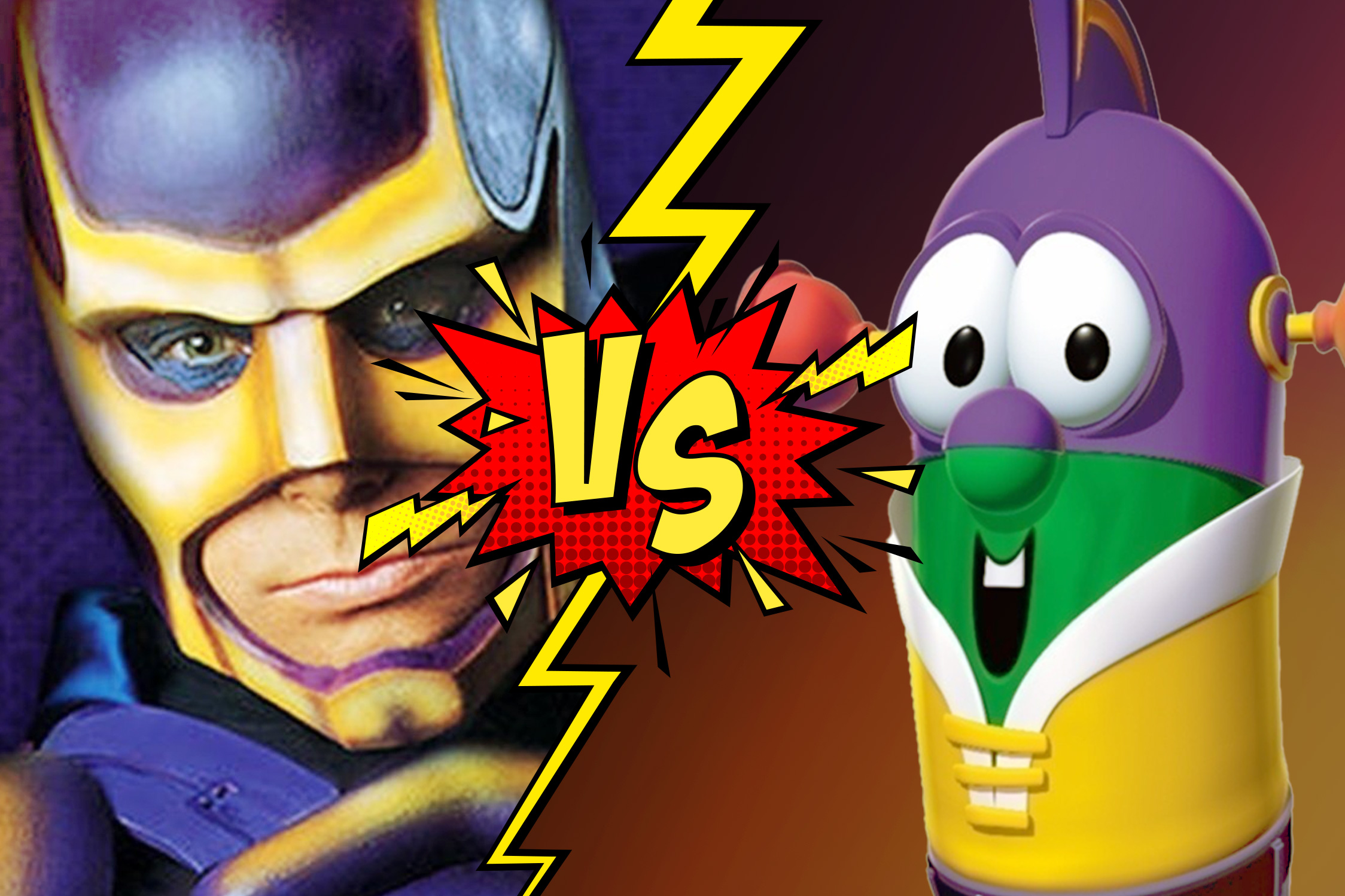 Contrary to popular opinion, the superhero boom is not new. As long as mankind has been telling stories, we have trafficked in tales of men and women with extraordinary abilities. Sometimes they used these gifts for good, such as King Arthur and Robin Hood. Sometimes they used them for evil. Sometimes the stories were just kind of weird. Squint a little, and you can see the reflection of Iron Man in stories of Gilgamesh and Hercules. It doesn’t take a religious scholar to tie the story of Superman to Moses himself.

That’s all to say there are a lot of superheroes out there. Some of them are amazing. Some are less so. But who is the absolute worst? There are many contenders, but both Bibleman and Larry Boy deserve unique consideration.

Bibleman, you may remember, is a costumed hero whose yellow laser sword appears to be at least somewhat powered by his Scripture memorization abilities. In the 90s, our masked hero would face all manner of dastardly, unbiblical characters to the thrill of any Sunday School teacher with a VCR.

Larry Boy springs from the VeggieTales Cinematic Universe (the VTCU, if you will), although his stories seem a little disconnected from the central plot. Larry the Cucumber fixes a few plungers to his head and administers vigilante justice to the citizens of Bumbleyburg, who must contend with Fibs and Rumor Weeds. He doesn’t have a yellow sword, but the Larrymobile is pretty slick and he does have a decent theme song.

Unfortunately, neither of these characters are particularly good at their jobs. Bibleman’s laser sword looks cool, but he is quickly thrown out of his depth with any problem that can’t be solved by reciting a Bible verse out loud. That, plus his relatively small fanbase, led to an absolute shellacking in our online poll. Guess the Bibleman-hive was asleep at the wheel, as Larry Boy trounched Bible Man in every single category we asked you all about.

Who has the better COSTUME?

So Larry Boy is the people’s champion. Congratulations to him and everyone at Big Idea.

However, the RELEVANT Editorial Team has a commitment to both fair voting and telling the truth, and sometimes these goals are mutually exclusive. Larry Boy has won the popular vote. But it’s worth exploring whether or not the people made the right call.

Because Larry Boy is a terrible superhero. This is not to say anything negative about the creative minds behind his adventures or VeggieTales as a whole, it’s a simple assessment of the facts. Everytime Larry Boy involves himself in a crisis, it is only to make things worse. His frankly astonishing incompetence gums up the works of any decent rescue attempt.

When the Big Fib threatened Junior Asparagus, Larry Boy’s sole achievement was to get himself captured and nearly killed. It’s unclear what, if anything, he expected to do. Plunge the thing into submission? People give Hawkeye a hard time but at least a bow and arrow is a time-tested combat weapon. Plungers? Please. Even the Super Mario Bros., plumbers by trade, had the wherewithal to leave their plungers at home when they went on their adventure in the Mushroom Kingdom. That’s because they know plungers aren’t weapons.

Even setting aside the matter of crime fighting tools, Larry Boy has several other downsides over Bibleman like, oh, I don’t know, no hands? The VeggieTales characters never seem to really need hands (they frequently appear to deploy some limited telekenisis which would, admittedly, come in handy in crime fighting) but it does help to have hands when you’re crime fighting. It gives Bibleman an enormous advantage over Larry Boy.

Haters might point out that Larryboy has a better ride and has clear advantage in terms of theme songs, and we can grant them that. But he doesn’t seem to know how to use the Larrymobile (and should this “Boy” even be driving?) since Archibald Asparagus has to coach him through every move and if theme songs locked up bad guys then Wishbone would be head of the FBI by now.

So, we don’t like to pick fights with our readers, who we appreciate, but our conviction on this point is firm. In terms of crime fighting ability and sheer can-do attitude, Bibleman is the superior superhero (which should not be taken to mean that he’s a good superhero) and Larry Boy brings up the rear of the pack, useful only for illustrating what not to do which, to be fair, seems to be the point of most of his stories anyway.