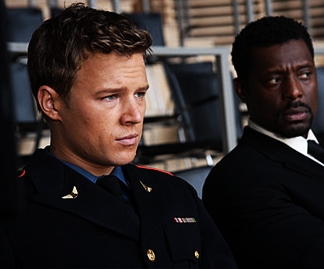 From the directors of the movie I Am Legend, (Francis Lawrence and Erwin Stoff) and hit TV series Heroes, (Michael Green) comes NBC’s Kings, a modern-day twist on the story of King David.

The show is cast with some big name stars including Ian McShane (Deadwood) and Chris Egan (Eragon and Resident Evil: Extinction), and some fresh into the limelight including, Sebastian Stan (Gossip Girl) and Allison Miller.

Set in the sci-fi-esque country of Gilboa (think Gotham City), King Silas (McShane) has come into power. Its new capital, Shiloh, has been reclaimed by Silas and turned into a thriving metropolis. But the king must handle the rising tensions with its neighboring nation, Gath.

Several soldiers are taken as hostages, but a row of Goliath tanks prevents Gilboa’s army from rescuing their companions. A young mechanic and now soldier, David Shepherd (get it?), disobeys orders and ventures over into enemy territory to help rescue the hostages. He comes face-to-face with one of the Goliaths, and destroys the tank to save the hostages. In a strange turn of events, one of the hostages David saves turns out to be the royal prince, Jack Benjamin (Sebastian Stan).

For saving the king’s son, David is thrust into the public eye and heralded as a hero. Paparazzi follow him everywhere as he is brought into the royal court. The king shows his gratitude and offers him “half my kingdom” as the biblical saying goes. David doesn’t want money, but he does have his eyes on the king’s activist daughter, Michelle Benjamin.

The king has bigger plans for David, promoting him to captain and forcing him to become the spokesperson for the ongoing war. As a result of poster-boy David’s meteoric climb to the top, many in the palace begin to plot against him, including the king.

‘The Matrix’ Was Right All Along

When Gath finally offers a peace treaty, the king accepts. But in the king’s blind hunger for power, he decides to continue the war. The war turns for the worst and many soldiers die. Later, the influential Reverend Samuel comes to King Silas with a message from God. Since Silas has chosen war, God has abandoned him and will choose another king.

Clearly, the show is chock full of biblical parallels. What’s interesting is the clever way Kings brings well-known biblical tales into a modern setting. For instance, in Samuel’s anointing of David, he bestows a watch upon him rather than pouring oil over his head. The king’s armor becomes an ill-fitting tuxedo, and instead of the harp David is a whiz on the piano.

In spite of all this, the show should have mainstream appeal for those unfamiliar with the biblical story of David. The plot is labyrinthine, seeming a bit like a soap opera at times with affairs, romance and a plot for revenge. Ultimately, though, it is the character development that makes the show worth watching. Between the bravery and honesty of David, the rebel princess, the partying prince, the superficial queen and the conniving king, viewers will be left wondering if the sheep, David, has been thrown to the wolves.