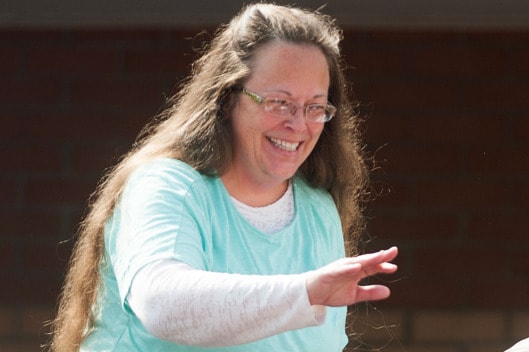 Kim Davis, the county clerk from Kentucky who was arrested for ignoring a court order to give marriage licenses to same-sex couples, is asking the federal court to dismiss the case against her.

This comes as Kentucky just passed a new law saying that the county clerk’s name is no longer required to be on marriage licenses from that county. The court filing argued that the issue is now “moot.”

Davis’ lawyers argue in the court papers that Kentucky’s new law gives “the very religious accommodation Davis sought from the beginning of this litigation.”

The ACLU, which filed along with four gay couples who were denied marriage licenses by Davis, was OK with the idea of dismissing the case against Davis.

James Esseks, director of the ACLU’s LGBT Project, told NBC News, “We agree that Kim Davis’s appeals should be dismissed.”

In September, Kim Davis spent five days in jail for being in contempt of court for not issuing marriage licenses and keeping other clerks from issuing them as well. We’re sure you remember: she became a champion for those against same-sex marriage and symbolic of hate for those fighting for same-sex marriage rights.

OK, Let’s Stop With All the Talk About ‘Smokin’ Hot’ Wives