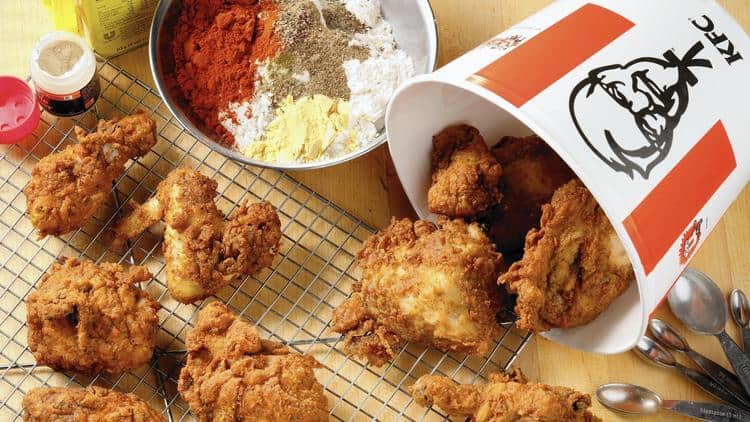 KFC’s recipe of 11 herbs and spice may have accidentally been revealed—to the Chicago Tribune.

Colonel Sanders’ spice recipe for KFC’s chicken is a heavily guarded secret and has been since the beginning. So secret that the original, handwritten recipe is in a 770-pound safe enforced by concrete with 24-hour video and motion-detection surveillance, according to KFC’s blog. It’s so secret—the blog post continues—that the spice blend comes from a few different parts of the country so no single hack could figure out the final blend.

However, last week, Jay Jones, a reporter at the Chicago Tribune published an article detailing the recipe after it had been accidentally revealed to him by Joe Ledington, Colonel Sanders’ nephew.

Ledington showed Jones a family scrapbook that had the handwritten recipe for the spice blend on its final pages.

“That is the original 11 herbs and spices that were supposed to be so secretive,” Ledington told Jones.

“The main ingredient is white pepper,” he continued. “I call that the secret ingredient. Nobody (in the 1950s) knew what white pepper was. Nobody knew how to use it.”

The Tribune published the recipe in its entirety, and when they contacted Ledington to confirm, he walked back his certainty and was hesitant to share the secret recipes, saying he had never shown the scrapbook to a reporter before.

KFC’s parent company, Yum! Brands, responded to Jones’ questions about the accuracy of the recipe, saying:

In the 1940’s, Colonel Sanders developed the original recipe chicken to be sold at his gas station diner. At the time, the recipe was written above the door so anyone could have read it. But today, we go to great lengths to protect such a sacred blend of herbs and spices. In fact, the recipe ranks among America’s most valuable trade secrets.
…
Lots of people through the years have claimed to discover or figure out the secret recipe, but no one’s ever been right.

The Tribune staff tried the recipe to compared it to KFC’s chicken and found it to be pretty similar.