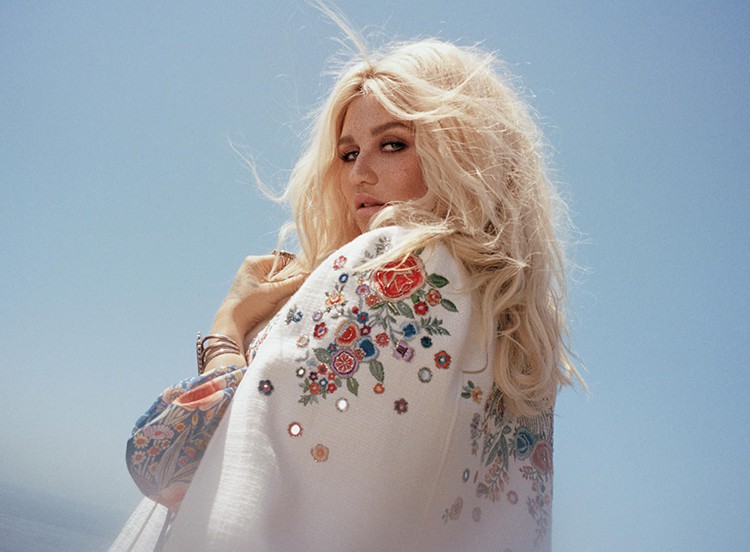 As an artist first known (and forever known?) for “TiK ToK”—a song bragging about waking up in the morning feeling like a hip-hop mogul and brushing her teeth with hard alcohol—Kesha wouldn’t be who you might expect to drop a spiritual anthem in the middle of the summer.

But an anthem is what we got.

“Praying,” a new single released ahead of her album Rainbow, gives us an inside look at some of the turmoil Kesha has lived through in recent years. At the beginning of the music video, released the same day, she opens up about depression, doubt and suicidal thoughts. “Being alive hurts too much,” are the last words we hear before the song starts.

If you’ve missed the headlines, a quick recap: Ke$ha went into rehab for an eating disorder, when she was released she dropped the $ from her stage name. Soon after she started an ongoing, years-long lawsuit with Sony Records to be released from her contract which she said required her to make records with her manager Dr. Luke on accounts of abuse. Kesha claims she’d been abused, emotionally and sexually, by Dr. Luke—to the extent of causing her eating disorder and depression—and asked to be released from the contract so she wouldn’t have to work directly with the man she claimed abused. Dr. Luke has denied the allegations.

It’s a beautiful picture of choosing not to hold onto bitterness when you’ve been unfairly wronged, of allowing a higher power to bring healing to what feels like a hopeless situation.

Salve to victims of abuse, hope for anyone who’s survived trauma, a belt-aloud-in-your-kitchen-worthy new hit—this song is so many things. You can pick almost any line at random and find encouraging words. And yet there’s one line I find cutting deepest:

I hope you find your peace / falling on your knees, praying

Kesha is singing to her abuser and yet it feels like she’s singing directly to me. It’s not simply that’s she is able to wish well upon someone who hurt her—it’s a direct reminder to where we should all be seeking healing.

Where are we finding our peace? Where are we turning? How are we coping with the ever crazy 2017? Because, for me, I know it’s not always quiet time with Jesus. Sometimes it’s ice cream for dinner. Or corn chips. Netflix for the evening. Wine with my roommate. Scrolling through Instagram again. And again. And one last time.

Our country seems more and more divided every day. Talking with friends, I know I’m not the only one who felt strange about celebrating America this Fourth of July. In a time when animosity feels like it’s at an all-time high and political ideologies claim to be built on religious lines, I pray we find our hope in something bigger than a party platform, a bill in Congress, a certain candidate.

I hope we find our peace on our knees, praying.

And it’s my prayer for myself. Sometimes life is so unexplainably painful. Other people hurt us—intentionally or accidentally. Sometimes we hurt other people.

Things we can’t explain away or fathom wreak havoc on us and the ones we love. I know God is good, at the head level. But sometimes it’s so hard to remember, at the heart level. Sometimes I don’t know what to do, where to turn, what can possibly help.

I hope I find my peace in the only place we can find real, true, life-giving and life-changing peace: on my knees, praying.