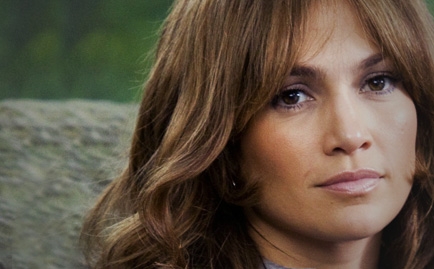 Most movie stars strive to have a glow about them, preening for cameras and wearing outrageous fashions in the hopes of paparazzi snapping their photos for the whole world to see. There are few, however, who can just enter a room naturally and bring the commotion of dozens of conversations to a halt—conversations of jaded film critics, no less—without even trying.

Jennifer Lopez is one of those people.

Amid a tumultuous past decade that saw her explode personally into both fame and infamy with fellow-star beaus like P. Diddy and Ben Affleck, and which took her career through the ups of #1 albums to the depths of making one of the worst movies of all time in Gigli, Lopez ultimately took time off after marrying Latin music star Marc Anthony to have and raise a pair of twins. But now she’s back, opening April 23 with her comeback movie—the surprisingly lively and funny The Back-Up Plan.

“It’s not a message movie. It’s a comedy that I admit had a very modern voice, it seemed up to date and I think that’s important,” Lopez says. “Some romantic comedies seem like they’re stuck 20 years ago and it was important to find one that works right now in the present. It was time for me to do a movie again and this was a romantic comedy, which I wanted to do first. Things come to me at the right time and the work I’ve done has always been indicative of where I was in life at the time, and this was serendipitous.”

In Back-Up, Zoe finds that, like J. Lo herself, she’s carrying twins. As one might expect, this leads to twice the comedic complications, but Lopez feels that the film still rings true.

“So much was art imitating life. I had just gone through twins, and [screenwriter Kate Angelo] and I met at a boot camp aerobics class after I signed onto the movie,” Lopez say. “She said: ‘I’m Kate, I just wrote The Back-Up Plan and just had a baby too.’ It was so fresh in our minds that we fought for lots of things in the script that the guys didn’t get.”

Indeed, among the pleasures of the well-written Plan are the many small details that elicit gasps of awareness from women and laughs from both men and women throughout. There’s a moment where Zoe is nearly caught weeping over her now-giant posterior, and a well-played scene where Zoe and Stan argue over a giant obstructive device called a pregnancy pillow that she clings to in sleep but which blocks and annoys him every night.

Lopez doesn’t consider Plan to be a comeback movie, rather describing it as “the first film I did since I took time to have kids and was fat.” She says she has always chosen her scripts to match the phase she was in amid her real life, and therefore Plan was “serendipitous”—the original script even had Zoe dealing with twins before Lopez ever signed on.

As her time to chat winds down, Lopez considers one more serious question—if she hadn’t met Marc Anthony, would she be considering single motherhood herself by now?

“No, it’s just too hard. To even choose to be a single mother is so courageous to me. It’s such a hard job to raise a child and be everything to that child without a partner. It’s valiant and brave,” she says. “It’s hard handling everything of my career already. On the second day of the press junket the kids were crying, ‘Mommy, don’t go’ and it was like, ‘Whoa, this is bad.’ I have to explain to them when I work that I’ll be home and the sun will still be out. They’re two and so pleasant and happy, and have a lot of love in their lives. They’re content, but they’re old enough to know [I’m] going somewhere when I put on hair and makeup.”

With that, J. Lo wraps up the conference and the room immediately bustles with activity again, mostly from normally jaded reporters and critics scrambling to the front for autographs, extra questions and photos. I lose track of her in the ensuing minutes, but as I slip my arm quickly through the strap of my backpack, I feel my left fist connect with an arm.

I look up in horror to see that I’ve accidentally whacked J. Lo in the shoulder. I’ve just accidentally sent perhaps the world’s most beautiful woman spinning, but she reacts quickly and catches herself on a table. As the room goes silent and all eyes focus on her again, I’m mortified and gasp repeated apologies from behind my hands, which are covering my face, which is now purple with shame and horror.

But J. Lo smiles instead of getting angry.

“Hey, buddy! Watch it! First you hit me with questions, and then you hit me for real!” she smirks and steps away. But two steps off, she stops.

I look up, afraid I screwed something else up.

“Think fast!” And with that, J. Lo takes a broad, joking swing at me, missing my face by at least half a foot though I reel back anyway while everyone has a laugh on me.

She winks again, before sashaying out of the room. And as she does, I realize she floats like a butterfly but is sweet as can be.

Getting Past Racial Superiority