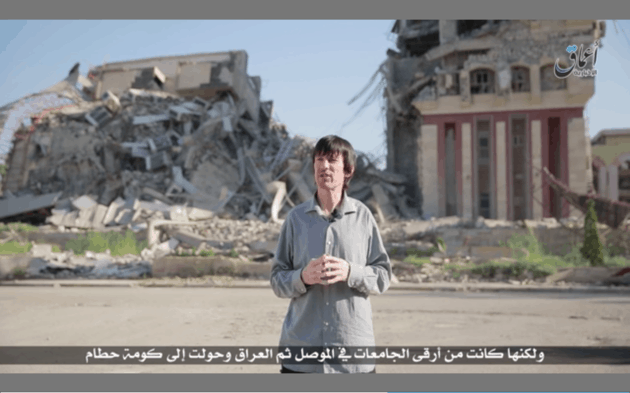 John Cantlie, the British journalist and photographer who was taken hostage by ISIS in November 2012, has appeared in a new ISIS propaganda video.

The video was released Tuesday and in the three-minute video, the journalist seems surprisingly relaxed, but it’s widely assumed that he’s being forced to record the video. He’s appeared in several videos since his kidnapping and ISIS has claimed that he’s written and published several articles for them.

The video shows Cantlie wearing an oversized button-down shirt being significantly more pale and thin than he’s looked before.

The video shows Cantlie in Mosul, a city that ISIS is controlling. It’s a key city that the United States is currently strategizing to recover.

When ‘Doing Church’ Becomes Too Much

In the video, he refers to the former University of Mosul, a neighborhood that has been bombed and people people shopping for the Eid festival to celebrate the end of Ramadan.

In one of the most high-profile cases in fight against ISIS, Cantlie was kidnapped while crossing into Syria with James Foley, who was brutally killed by ISIS in August 2014.

Britain’s New Prime Minister: ‘My Christian Faith Is Part of Me’

The Massacre the World Ignored