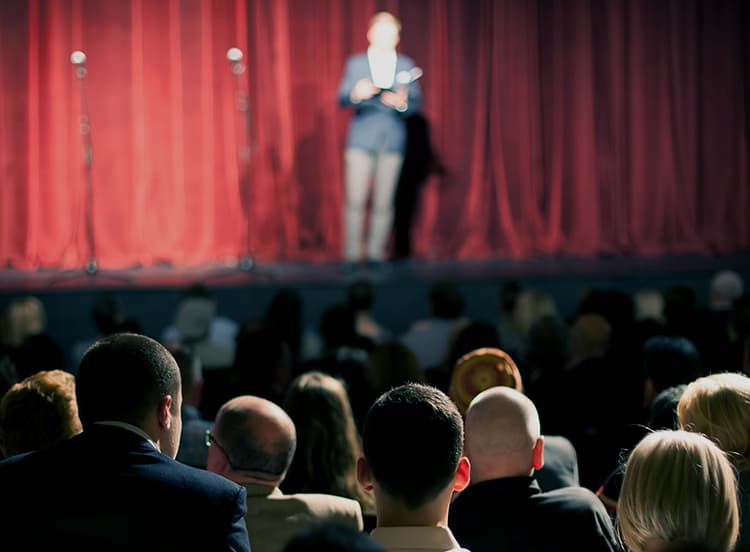 Here’s Your First Look at Emily Blunt as Mary Poppins

I once sat next to a man on an airplane who told me he tried to kill himself by overdosing on sleeping pills. While waiting for the pills to kick in, he decided to spend his final moments watching stand-up comedy on YouTube. This took him down a rabbit hole that ironically led him to a clip of George Carlin mocking suicide in his special, Life Is Worth Losing.

“Every 30 seconds someone commits suicide. That means right this moment, some guy is getting ready to bite the big bazooka,” says Carlin, beginning his bit with equal parts statistical precision and tasteless humor. Carlin then remarks, “Who’s got time to be committing suicide?! Aren’t you busy? I got [things] to do.”

My seatmate explained how Carlin’s words made him realize, through the creeping haze of a potentially fatal slumber, that he didn’t really want to die and was simply afraid of living. He was afraid of the burdens of being a man, a husband and a father. He realized he indeed had much left to do like everyone else, and for once, this sublime truth made him feel deeply connected to, rather than overwhelmed by, his existence.

All because of a joke.

Suicide sounds like it should be one of those untouchable topics for comedians, however, Louis C.K. has cultivated one of the most successful comedic careers in history by doing bits about each one of these taboo topics. Comedic genius often bends, or even breaks, all the rules regarding what one can and cannot say. That’s exactly how George Carlin rose to infamy: through his outlandishly offensive routine called “The 7 Words You Can Never Say On Television.” Love him or hate him, his linguistic prowess allowed him to dive headfirst into unquestionably distasteful subjects, and come up with material where insight outweighed offense.

Perhaps the most beautiful thing I’ve witnessed when people find God is a renewed sense of purpose, healing and hope. However, I’ve also seen far too many people attempt to ground their identity in doubt-free theology making it all too easy for comedians such as Bill Maher, George Carlin or Ricky Gervais to come along and thoroughly dismantle flimsy beliefs about the creation narrative, the historical Jesus or how seemingly misogynistic and oppressive the Bible sounds. These atheist comedians are like dogs that can lead us right to the good stuff—the issues we really need to research in order to cultivate healthy spiritual lives.

Comedy, especially comedy that offends social hypocrisy, is perhaps the greatest method of speaking truth to power. Malcolm Gladwell described the power of satire as sugarcoating a bitter truth to make the medicine go down. As a straight, white, middle-class, Christian male sitting in the seat of privilege, I’ve had to swallow quite a few sugarcoated critiques from my brothers and sisters from different ethnic and socio-economic classes. While it’s human nature for us to stay in groups of like-minded folks, it’s always important to strive beyond our instincts for comfort and security. Again, I get that no one likes to be made fun of, but refer back to the first point as to why we must seek to escape an increasingly sensitive cultural mindset.

What better way to love the “foreigners” in your life than to get to know their culture?

Humor is so intimately woven into what we’ve experienced that it’s almost impossible for comedians to avoid talking about their culture and highlighting what makes it unique. So listen up, and take notes. It’s a great way to avoid asking cliché questions, assuming stereotypical characteristics and can even help educate us on serious social injustice. I’ll never forget Dave Chappelle’s bit about police brutality in Killing Them Softly. His descriptions are crude yet accurate, he uses an abundance of racial slurs and profanity, mocks white culture and yet his brilliant anecdotes made a young, naive middle-schooler start investigating the history of racism within law enforcement in America. This is why Esquire did a piece on “Comedians As Prophets” and I couldn’t agree more.

Humor is extremely communal. We laugh 30 times more often when we’re around other people than when we’re alone.

So imagine the vastness and variety of your potential community when you’re open to diverse perspectives and aren’t as sensitive about laughing at yourself.

I’d rather learn to laugh with my new friends than resist the current assault of humor on corrupt power structures rooted in systemic injustice. On a more personal level, being able to laugh at yourself is one of the most attractive, humanizing and inspiring things you can do according to a Forbes article on how humor is equally essential for success life and in business.

Do you think Jesus was funny? He had to be, right? He hung out with 12 blue-collar dudes for three years and partied with the most sketchy people in society, people who I’m almost positive told jokes crass enough to make your pastor shudder.

No one invites that stoic, toothless version of Jesus out for drinks as much as He seemed to get invited out. “Here is a glutton and a drunkard,” the critics cried of Jesus’ social habits (Luke 7:34). He had to be able to roll with the punches and clearly He was with all those parables and quick comebacks.

Jesus’ ministry is full of sharp mockery of religious leaders, political figures and even His own crew. Elton Trueblood wrote pretty much the only book on this topic called The Humor of Christ back in the 1960s. It’s dated, but worth reading as it helps Christians understand the power of humor in doing all the things listed above: embracing spiritual correction, speaking truth to power, eliminating cultural prejudice and deconstructing religious cliques.