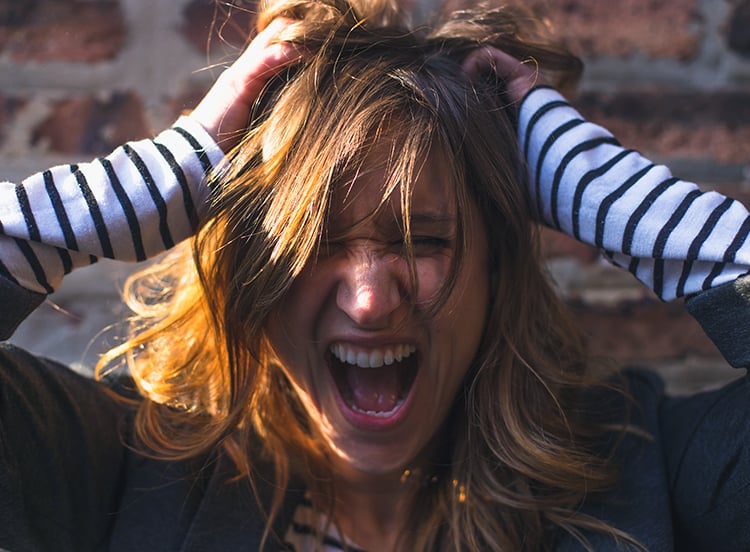 Think about the news of the last week or so, and what do you remember? As we recovered from the web’s obsession over covfefe, a flurry of news stories sparked intense reactions across social media. Bill Maher’s use of a racial slur. James Comey’s testimony before Congress. Shakespeare in the Park.

Per usual, these incidents didn’t spark “discourse” so much as they did something rather uglier—outrage.

Political, social, racial and sexual issues have always divided the public, and Christians as participants in culture have habitually chosen sides. However, social media has allowed for the amplification of conversation-killing cultural outrage inside and outside the Church, turning spaces for sharing rhetoric into echo chambers with a cacophony of voices declaring, in so many words, “it’s us versus them!”

Where is all this cultural outrage really getting us?

Consider a few ugly truths about our culture of reaction, and how it becomes problematic for the Church—especially when the sound becomes so deafening that individual voices are lost.

A culture of reaction tends to stifle relevant and substantial conversation.

This seems like the most obvious thing in the world, but we certainly don’t act like it. Take any hot topic you desire, see what your friends on Facebook are saying about it and look at the result.

A positioning statement elicits a reaction and is met by a challenge, a cycle that often goes through several iterations before one or both sides gives up out of frustration, explodes into ad-hominem attacks or “agrees to disagree.” (Then come emojis and friend requests until the next time.)

Even this final, conciliatory outcome isn’t the optimal outcome, because more often than not, the reason for a friendly parting of ways is the sense that “this really isn’t getting us anywhere.”

True discourse doesn’t end with “I respect your views but mine are right,” and handshakes and smiley faces. It ends with a mutual understanding of the validity of an alternative point of view and an appreciation for that alternative. Relevant and substantial conversation about any contentious issue must begin with the idea that I may not have all the answers and that my conclusions are malleable.

“I won’t compromise my Biblical beliefs,” Christians often say. This is a fair response, but must take into consideration the following:

Christianity does not claim, nor should it claim, a cultural hegemony.

Outside of the Creeds, precious little in our faith is “set in stone.”

Acknowledging the validity of an alternative doesn’t presuppose it is correct.

Beliefs are built of a complex constellation of opinions, presuppositions, experiences, ideas, questions and feelings. They are informed by education, upbringing, culture and a thousand other points of reference. When outrage culture denies the validity of a belief, it chips away at these one by one, tossing them aside as if to say they don’t matter.

But they do, and in purposeful discourse that results in a positive outcome, they are handled with care. We can be Bible-believing Christians without foisting our positions on others, taking them for granted or disregarding the views of people with a different epistemological framework.

Cultural outrage tends to split Christians into a left-right dichotomy.

Before going any further, it is worth exploring the idea that this dichotomy is almost completely arbitrary, and that falling on side of the political spectrum or the other has little to do with one’s personal faith in Jesus Christ as Savior.

For many of us—myself included—this realization came as a bitter pill to swallow, and some of us have dutifully spit it out. It’s no secret that evangelical Christianity in America has tended to swing toward the political right for nearly half a century, and as a result, the relationship between Christianity and conservatism has come to be viewed as a given.

There’s nothing wrong with being a conservative Christian, or indeed, a liberal one; where this becomes hazardous is when faith is viewed as a function of political conviction rather than the other way around. When we move from the assumption that Christians may lean politically this way or that way to the expectation that they must, we’ve danced into the ballroom of cultural outrage.

Christians don’t have to be pro-anything. What Christians must be is deferential to Christ, in passionate pursuit of His Kingdom. Kingdom-minded Christianity understands the above will be left in the dust in the light of Christ, necessities only in a world with death, sin, grief and suffering.

If this leaves you feeling raw, remember Christ’s command to love your enemy. To love one another as He loved us. Then think about the people you call “friends” on social media, especially the ones you disagree with.

Cultural outrage values having an opinion over doing good.

Two notable instances of offense cropped up in the past couple of weeks. The first was Bill Maher’s use of a very derogatory word in an unbelievably demeaning way. A week earlier, Kathy Griffin shared a disturbing, violent image of herself displaying a prop that looked like the dissevered head of Donald Trump.

Each “joke” was beyond reproach, offensive at best and painfully un-funny.

Tensions flared, emotions erupted, impassioned cries for the careers of the guilty were plastered all over the internet and half-hearted apologies ensued. And then, for the most part, we moved on.

This week or next, someone else is going to say or do something rotten, and we’ll all get upset again, and they’ll get all the attention again. The various publications that print their annual “2017 in Review” won’t cite any of these incidents as anything other than a footnote, an indication that our culture is desperate for attention and reaction and drama.

Not to say these incidents aren’t important or deserve to be summarily dismissed as a product of the zeitgeist, but where did the outrage get us? What meaningful change resulted? Did we collectively have a meaningful discussion, decide on what should change, and then develop a plan for improving lives and repairing relationships between people with different values, colors of skin, sexual orientations?

Outrage culture values virtue signaling as a barometer to determine whether a person is good or bad. The louder the reaction, the more attention it gets, and a winner is determined by consensus. “This person believed the correct thing!” Rarely do we see or talk about someone who, spurred to action by such an incident, delivered a positive outcome for society as a result.

Not even Christians, who are supposed to be participating in God’s Kingdom whether or not our culture gives us a reason to do so.

The people involved in prison ministries and soup kitchens, those in the missions field and in the minefields, are the true bearers and deliverers of Good News. I’m not trying to say that they are outside of American culture. Certainly they pay attention to it in some way. They probably even care about it and have opinions on it. But they don’t wear these opinions on their lapel as a symbol to the rest of the world that they cared most or cared best. Their actions show where their hearts truly are—separate from culture, invested in something far from reaction and outrage every time someone does or says something awful.

Objectively, cultural outrage amounts to little more than a game in which the participants are rewarded for garnering the most (positive or negative) attention. They are paid in social proof or in advertising dollars, the spoils of a society that places a premium on generating the most chatter.

The rest of us, even if we share some of the earnings, ultimately end up losing. At the same time, people who could be helped by a dedicated level of social awareness are losing. Their wars aren’t cultural ones but ones with bombs and bullets. Their oppression isn’t dogmatic, it’s physical. They are many, but their voices are tiny, lacking the amplification of outrage a comment or click affords.

So tiny are their voices that the swell of every social media storm threatens to drown them out. And unless we start to listen, before long—it will.

These ‘Parks and Rec’ Pop! Collectables Will Likely Be Priceless One Day

When Is It Good to Question God?