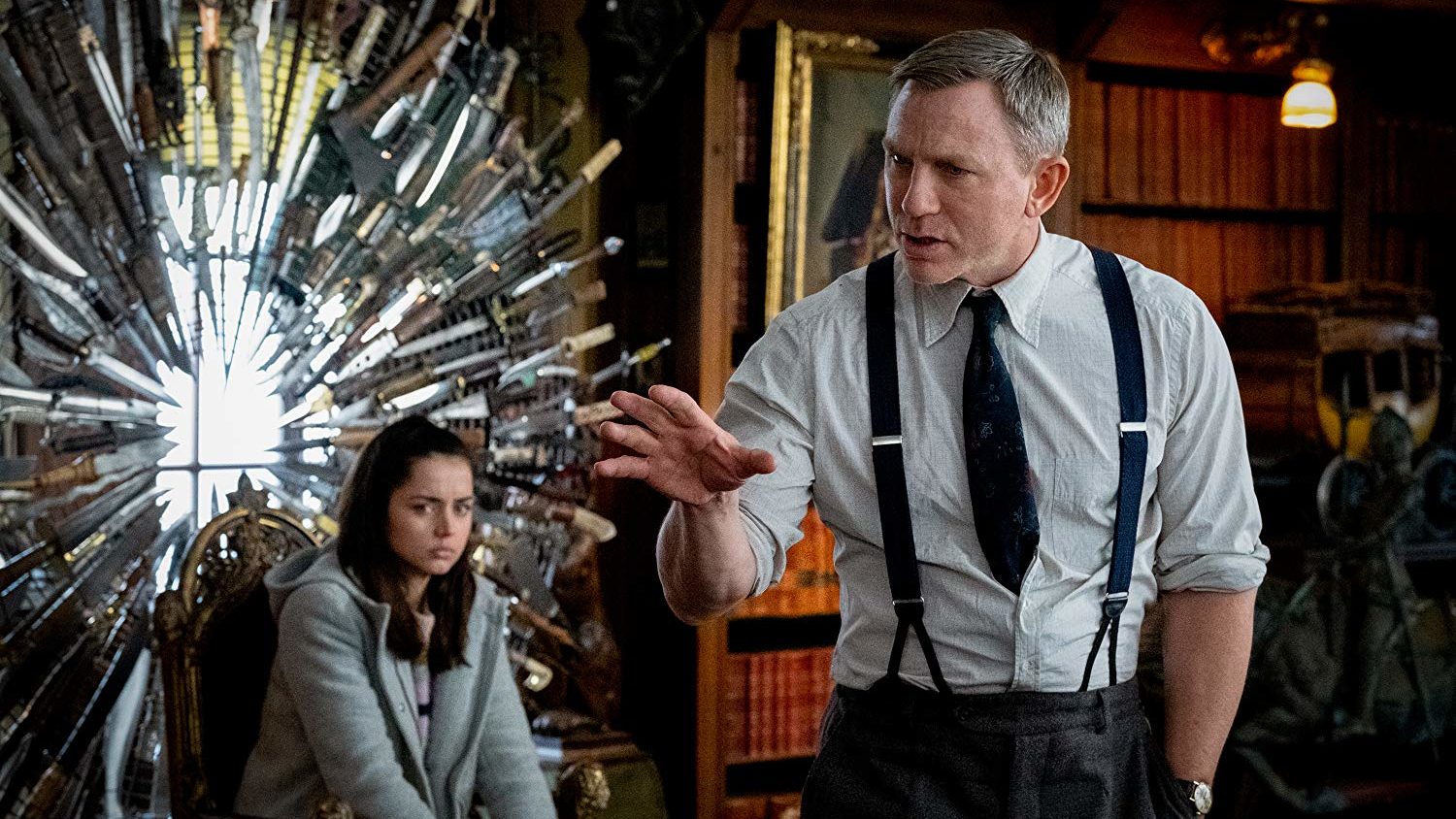 Knives Out is the kind of movie people are always saying Hollywood doesn’t make anymore: a smart, original story aimed at grownups with style to spare and plenty on its mind. The mystery follows the travails of the Thrombey family, heirs to an immense fortune left behind in the wake of family patriarch Harlan’s suspicious demise on the night of his 85th birthday. Enter Benoit Blanc (Daniel Craig), a famed private detective with a Colonel Sanders drawl and an eye for detail. “I suspect foul play,” he muses by the fire, casting a wary eye on the Thrombey children and various in-laws. “And I have eliminated no suspects.”

It’s a delightfully old-fashioned whodunnit, wearing its Agatha Christie influences proudly on its ruffled sleeves while updating the concept with social themes that place the whole affair squarely in 2019.

Director Rian Johnson is clearly having a good time, directing his crackerjack cast against type (Toni Collette as a lefty Instagram momfluencer, Chris Evans as a self-absorbed brat) and taking care to thread every needle with delicious aplomb. It’s all exceedingly fun but it also continues Johnson’s ongoing interest in exploring the disruptive power of kindness.

From here on out, we’ll be getting into a light Knives Out spoiler territory. If you haven’t seen it yet, make due arrangements and come back later. You’ve been warned.

At the center of this whole thing (the donut in the donut hole, if you will) is Harlan’s dutiful nurse Marta Cabrera, played with soulful earnestness by Ana de Armas. Her skill here shows why Johnson was so keen on resting the movie on her shoulders. The Academy is normally attracted to far showier performances than de Armas’ here, but it would be a crime to not give her consideration come Oscar season.

She stands out from the rest of the cast by virtue of her selflessness and, as Blanc has it, her “kind heart.”

It’s against her nature to lie (as we repeatedly see, in disgusting fashion) but moreover, it goes against her nature to vie for money and attention. The Thrombeys are intertwined in their various schemes and grifts, angling for their piece of the pie, but Marta’s compassion carries her aloft above such mean dealings. Even when Blanc suspects her of not being entirely forthright, he doesn’t doubt her inherent goodness. While the rest of the Thrombeys see Marta’s kindness as a weakness ripe for exploitation, Blanc knows strength when he sees it.

Johnson’s a consummate filmmaker who clearly relishes the craft, but his real obsession is a moral one. Namely, how do we defeat evil? From his sci-fi thriller Looper to his familial caper Brothers Bloom to, of course, The Last Jedi, Johnson wants to know what it takes for good to triumph over bad.

Unlike many filmmakers with similar interests, Johnson doesn’t approach this question naively. He’s well aware of the ways that evil can embed itself into a person, a family, a culture or even a galaxy at systemic, generational levels. In Knives Out, the Thrombeys are petty, mean-spirited, disingenuous and racist, yes. But they’re also part of broader society of pettiness, mean-spiritedness, deceitfulness and racism; societal pandemics manifesting in individuals through emotional and spiritual malevolence.

Marta is inoculated from some of this. As an immigrant with few financial means, she’s less susceptible to the corrupting influence of power and privilege than the greedy, miserly Thrombeys. As a woman of color in America, she’s not easily given to a sense of entitlement. The Thrombeys think these things render Marta an object of pity or even scorn, but they serve her well on Johnson’s moral plane.

But most important is her “kind heart.” Again and again, Marta is saved from the Thrombeys’ schemes because they don’t recognize her fundamental difference from them. She’s not slobbering over Harlan’s millions, desperate to prove her own superiority or, in the end, frightened of the truth. She is a good person, and that is enough to overcome the decades of generational wickedness arrayed against her.

One of the many insidious things about evil is the ways it burrows into our cultural roots. It’d be bad enough if people were racist, but it’s a challenge of a different magnitude that those racist people go on to build racist institutions. Life would be hard enough if some people were greedy, but the fact that these people can then influence systems favorable to greed takes the fight to an exponentially different level. Against such engrained forces, decent things like individual compassion and generosity can feel meager. What hope does the goodness of one person have against generational evil?

And Johnson’s answer is: more than you might think. In The Last Jedi, Rose Tico ascended into many fan’s hearts with, “That’s how we’re gonna win. Not by fighting what we hate, but saving what we love.” This seems close to the beating heart of Johnson’s ethos. In Looper, Brothers Bloom and his Star Wars movie, cycles of violence are broken by self-sacrifice. In Knives Out, Marta is both absolved of the crime and protected from her attackers by her fundamental goodness.

And if that seems a bit naive, consider that she is far from the first to demonstrate just how powerful individual compassion can be. We are, after all, entering the season in which God chose to rescue the whole world from cosmic systems of violence and death, not through a conventional king or textbook superhero, but a baby in a manger. His goodness was enough to turn the world upside down, and disrupt the cycle of death and violence that had plagued humanity since the Garden. And his story ends, like Marta, with him taking his rightful place. “My house, my rules, my coffee.”

Mark Batterson on the Power of Living in Wide-Eyed Wonder