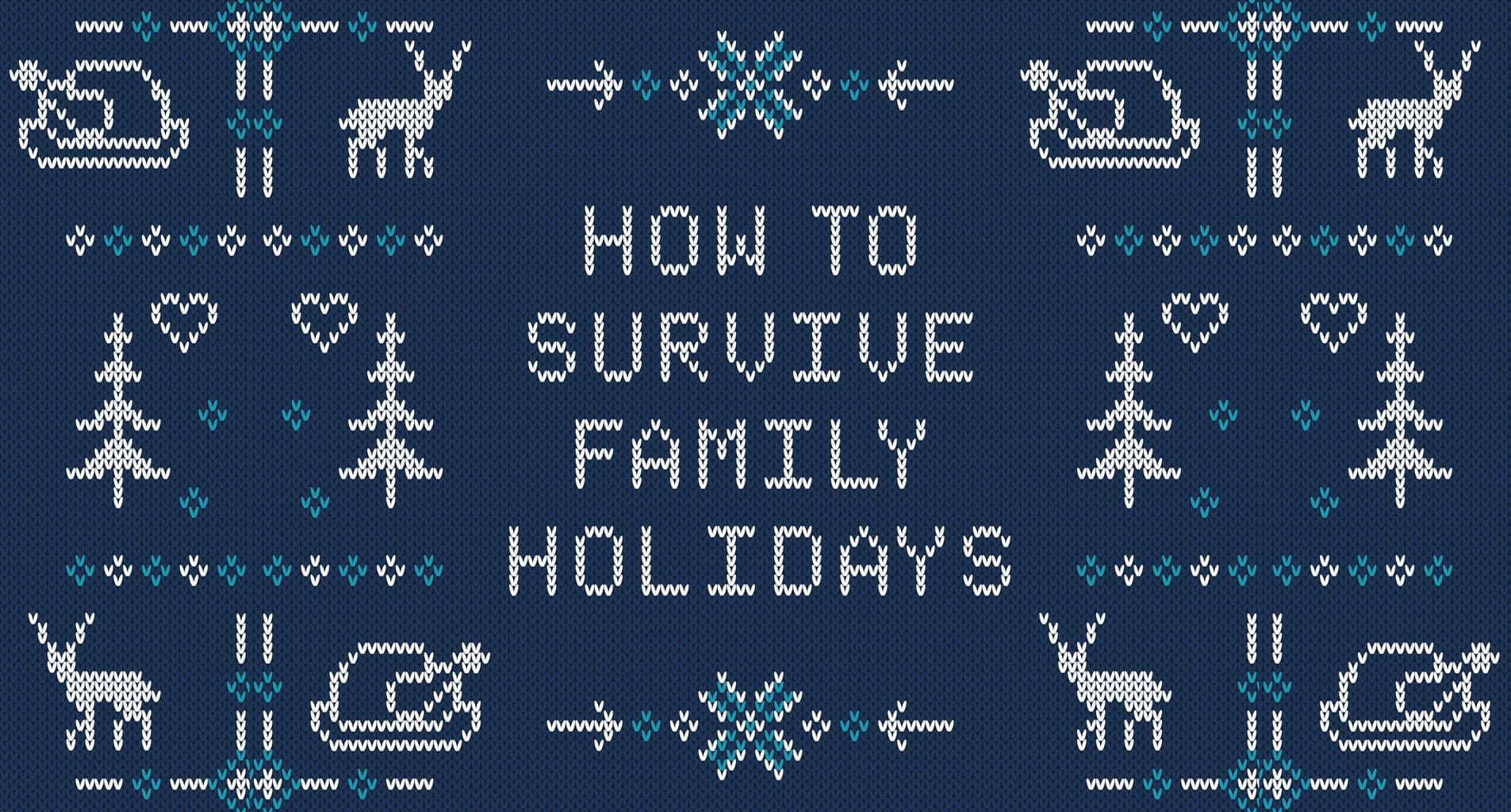 This season, millions of Americans of all races and creeds will gather in their homes, sit around big tables stacked high with plates of roasted turkeys, mashed potatoes and pumpkin pie to argue about politics. It’s one of America’s oldest and most hallowed traditions.

Ever since the pilgrims sat down with Indians at the first Thanksgiving, kicking off the Great “Actually, We’re Not Indians, We’re Native Americans Fight of 1621,” our nation has kept alive a great tradition of ruining an otherwise great meal with some of the ugliest and stupidest debates the English language is capable of producing.

Of course, not all traditions are worth keeping alive, and some should get a turkey baster through the heart. So, if you’re interested in burying one of the lamest national holiday traditions this season, enjoying your meal and having some actually pleasant, or at least generally not-terrible, conversations around the table, read on. Here are your best bets for actualizing peace on Earth and goodwill toward men in your holiday season.

Start the Day Off Right

The easiest way to clash with your uncle who thinks God told him to donate $10,000 to buy some televangelist a jet or the cousin who seems to have invested his parents’ life savings in Hot Topic apparel is to just show up for dinner and start eating. When the only context for your relationship is “let’s just get through this,” you’re going to butt heads.

As long as your most contrarian family members aren’t actively verbally abusive, it’s worth trying to engage them before the turkey’s carved. This doesn’t have to be a long, heartfelt conversation, in case you’re worried your kid brother is just going to start bringing up bands you’ve never heard of with names like “Nightmares of Fallen Empires.” There’s no harm in bringing a good game, a soccer ball or even a couple episodes of a solid TV show to get things off on the right foot. You’re establishing fresh context for a relationship based on something other than wrestling over the same turkey leg or debating whether or not Bernie Sanders would have won. A more solid, inoffensive foundation at the outset is going to save you a lot of time and energy in the future when you’re trying to steer a conversation away from dicier topics. You’ll actually have something to talk about that doesn’t involve violently opposed opinions.

Ask a Lot of Questions

If you get stuck next to your dad’s stepsister and her dinner-long monologue about how much healing she’s found through energy crystals, it’s only because you let the conversation get away from you. When talking to relatives who are prone to conflict, pre-empt some of the potential hostility by asking them questions about safe, mutually enjoyable topics. Are politics going to be thorny? Talk about sports. Think sports might lead to some contentious conversations about Colin Kaepernick? Talk about your favorite Christopher Nolan movies. Everyone has a favorite Christopher Nolan movie. If all else fails, just ask about their favorite moments of the year or a favorite holiday memory.

This serves a double purpose. The first and most obvious is to keep your talk away from anything that might end with you wanting to press your head into the gravy bowl until you pass out. But more important, you’re learning things about your family that will reveal more about who they are as a person and not just a debate partner. As you probably know from Facebook, it’s easy to lash out at someone else’s opinions when you don’t really know them. The more you grow to see them as an actual three-dimensional human being, the easier it will be to engage them on contentious issues without things blowing up in your face.

Be Ready to Redirect

With family, the natural pull of conversation can be toward the contentious. There’s no scientific explanation for why this is the case, but scientists know it’s true just as well as the rest of us. In fact, they fight about it with their families over the holidays. That’s why your mom keeps asking when you’re finally going to settle down and give her some grandkids (You’re 19 and single.). It’s also why your dad brings up some study he read on a flyer he found on the street about how the moon landing is a hoax perpetuated by the New World Order.

That’s why you have to be ready to redirect. As good as it might feel to clap back with some withering snark, (“Maybe I’d have some kids by now if Jason hadn’t dumped me after Dad threatened him with a shotgun last Thanksgiving, Mom.”) it’ll be better for all involved if you try to steer your chat back to calmer waters.

This will require some sharp improvisation on your part. No matter how good your intentions, suddenly changing the subject can look less like peacemaking and more like a seizure if done poorly. Remember, you’re not necessarily trying to evade certain topics, you’re just trying to keep certain topics from becoming a source of needless conflict.

Someone wants to talk politics? Take the conversation to local elections, where opinions can often be less feisty. Someone wants to bring up their conspiracy theory about the globalist origins of the climate change theory? Talk about the weather. The more peaceable members of your family will be grateful for subtle segues that keep the dinner table calm and provide opportunities for everyone to engage.

Know When to Stand Your Ground

There are times, of course, when redirection isn’t an option. Some opinions go beyond aggravating or argumentative, and right into being offensive. At times like this, there is some value in kindly but firmly offering real correction and rebuttal.

There’s no hard and fast rule for when this is but if you hear a family member or someone at the table say something you think might be worth calling them out over, you could try asking  yourself these questions:

1. Does this really need to be called out?
Is this an opinion that just bugs you, or is it really causing harm? You might disagree with Uncle Mike’s negative assessment of the new Taylor Swift album but it’s probably not worth throwing dinner plates over unless you are Taylor Swift, in which case, thanks for reading. However, if Uncle Mike thinks the new Tay Tay album is bad because women are getting too uppity these days and really need to lay off all the talk about equality, that opinion could very well be doing damage to communities, families and even Uncle Mike’s own soul.

2. Does this need to be called out now?
Just because something should be corrected doesn’t mean it should be corrected immediately. Christmas dinner is a special time when the whole family gets together—for a lot of people it’s the only time they get with their extended family all year long. This may or may not be a huge deal to you, but it could mean a whole lot more to your parents or grandparents. That’s why it’s worth asking if addressing whatever you’re considering addressing is really worth doing on the spot. Is this something that should perhaps be handled discreetly? If so, then follow through and actually have the conversation later—or take the passive-aggressive approach and post about it on Facebook so the family member definitely will see it later.

3. Does this need to be called out by me?
This is a tricky one, because social media has taught us all to speak our minds at all times, about all things, to anyone who happens to be in earshot. That’s fine when you’re tweeting about how much you hate Mondays, but when it comes to correcting your cousin’s boyfriend’s opinions about “fake news,” it’s a little dicier.

Consider the context of your relationship with the person you’re talking to, and how it might be perceived. Does your relationship have a foundation that will help guarantee you’ll be heard? Is there already too much hostility between you two for your point to really get across? Consider whether or not you’re the right person to address what’s going on and if not, consider the possibility that you’re just not the right person for this particular fight. That said, there are some opinions that are just going to have to be called out, no matter who you are. Displays of blatant racism, bigotry and offensive slurs are in everyone’s wheelhouse.

Know When to Just Be Quiet

Unfortunately, sometimes you can follow all of this advice to the letter, and things will still go south around the dinner table. Part of having a family—part of having a life, for that matter—is unavoidable conflict.

Jesus said, “Blessed are the peacemakers,” and He said it to a group of people who were no less prone to conflict than we are. But being a peacemaker—someone who actually makes peace—can look like a lot of different things. Usually, it takes action on your part—thoughtful, loving communication to dispel needless anger and create some lasting calm in its place. But sometimes it might look like standing down, swallowing your pride and letting something go.

After all, you’ll have more time to eat if you’re not shouting.

What All Christians Need to Know About the Enneagram