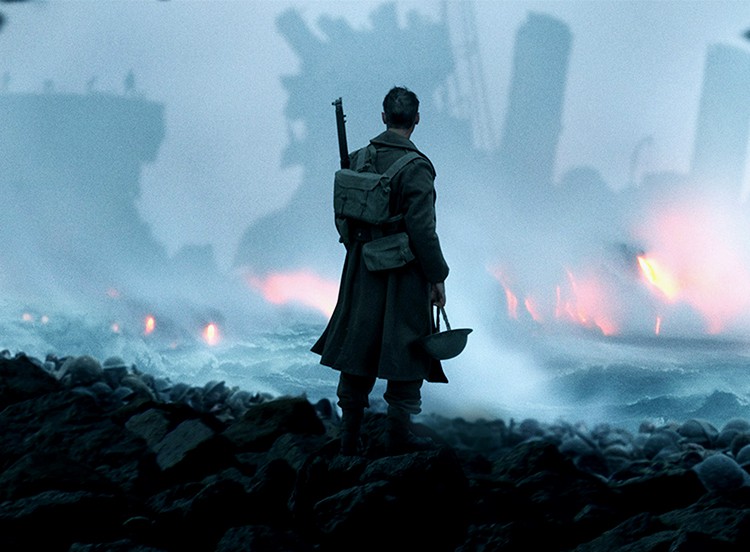 Sean Spicer Has Resigned as the White House Press Secretary

Like the British men who inhabit it, Dunkirk exists quietly.

This, Christopher Nolan’s 10th film, which releases around the United States today, features no main character or cast, and such minimal dialog you could miss the lines in a given scene just by checking your phone or adjusting your chair. Remember how little Tom Hardy speaks in Mad Max: Fury Road? His Dunkirk character, a British Spitfire pilot, makes Max sound like something from an Aaron Sorkin show.

You’re two or three minutes in before you hear any sounds at all, and then mostly just gunshots and boots for another 10 minutes. Eventually, you’re engulfed in the tense, tick-tock of composer Hans Zimmer’s score, with the tightening and loosening common to Nolan’s soundtracks for Inception, Interstellar and any of the Dark Knight movies. By the end, you understand that the famous director—who you have to think is now among the best in Hollywood history—takes charge of his picture in a fashion normally reserved for characters.

The effect is breath-holding, restless tensity from the opening frame to the end. This intensity, despite the story’s inevitable outcome, pushes Dunkirk, ultimately unfolding into an inspiring tale of hope—a future-focused hope Christians should immediately recognize. Already, some suggest this may be his best work yet.

From the outset, Nolan’s decision to tell the story of Dunkirk might raise eyebrows since the historical event wasn’t a winning effort. And retreats rarely make summer blockbuster material. That’s why Nolan reportedly prefers to think about Dunkirk not as a war story, but a survival story.

The movie tells the story of the British military’s Operation Dynamo (though you don’t hear that name in the film). Not long before, newly in-power Winston Churchill called the effort in Belgium, “a colossal military disaster.” And in May 1940, due to some misplaced assumptions, some 400,000 British and French forces near Belgium ended up surrounded. But instead of entirely wiping them out, the Germans slowed their efforts—if you’re looking for a rabbit hole, start researching theories about why the Nazis did this; they’re myriad—which gave the Allies a chance to evacuate soldiers through the port town of Dunkirk. To aid the German-battered British military, civilian boats—most manned by soldiers, some by civilians—crossed from England to Dunkirk Harbour to carry people back to safety.

For the British, Dunkirk stands for something important, for determination, ingenuity and national resilience. A phrase even exists to capture these ideals called “the Dunkirk spirit.” For London-born Nolan, this story represents familiar territory, the mythologized tale of Dunkirk. Think of it perhaps like the British version of George Washington’s crossing the Delaware River.

This piece of English lore finds new life in Nolan’s hands. His storytelling is always ambitious. (He recently told Esquire that he can’t stand the idea of making a film someone else already made, which actually goes a long way toward understanding him.) Who can forget Memento, his hyper-ambitious revenge tale told in five-minute scenes in reverse, or the loopy Inception? This movie, Dunkirk, fits squarely with these films.

The story looks at Operation Dynamo from three perspectives, land, sea and air. And each arc occurs on a different timeline: The escape from land happens on the beach and takes place over a week’s time; the rescue attempt from sea happens in a day; and the conflict in the air develops in an hour. Reminiscent of the later parts of Inception, these three stories weave in and out of each other, and as they progress, the lines hone closer and closer to one another until they meet. The film makes this structure clear from the outset, but the story moves without typical cues to the audience, showing both welcomed restraint and confidence on Nolan’s part.

Don’t let the timeline structure confuse you, Dunkirk is about more than its cinematography. It explores the fear, desperation and confusion of war, not from a theoretical perspective but a local one. Rarely—if ever—do we see Nazis, explosions or even weapons firing. Instead, we viewers are focused on allied soldiers pressed against barricades, huddled together and scrambling. This film isn’t about visual effects, not nearly as much as the effects of war.

Some reviewers don’t like the lack of details present—throughout, we know very little about the characters we’re watching; notably, Nolan shows neither Hitler (or any Germans) nor Churchill (or any of the expected images of World War II). Certainly, this film rejects any Ken Burns-ish pull toward precision and understanding. Watching Dunkirk feels more like sitting in on Nolan’s childhood imagination of the fabled story, complete with the incompleteness of what you’re seeing.

Nolan represents a master filmmaker at many levels, perhaps most famously because of his handling of final scenes. Whether it’s the brain-turning reveal that concluded Momento or The Prestige, the feel-good bow on top of the Dark Knight Trilogy or the maddeningly open-ended wobble closing out Inception, Nolan’s conclusions are unparalleled. And if a thread connects his work, setting aside a few iconic surprises, it’s the way his movies end simultaneously with resolution and new doors opening. And that’s where Dunkirk adds a layer to the Nolan canon.

Dunkirk owns all the material of a tragedy. The film indeed leaves us with demoralized soldiers, a heartbroken boat owner and a (probably) captured Spitfire pilot, and all of that is on top of an objectively tragic scenario Yet, the British romance of Dunkirk remains palpable.

Churchill called the rescue at Dunkirk “a miracle of deliverance.” That idea, along with the lore of the Dunkirk spirit, envelopes this story. And while Dunkirk doesn’t stray from Nolan’s trademark haunted, quasi-resolutions, it does end with a clear—and Nolan’s clearest—vision of hope. Because, despite the immediate circumstances, Nolan and we know the final ending.