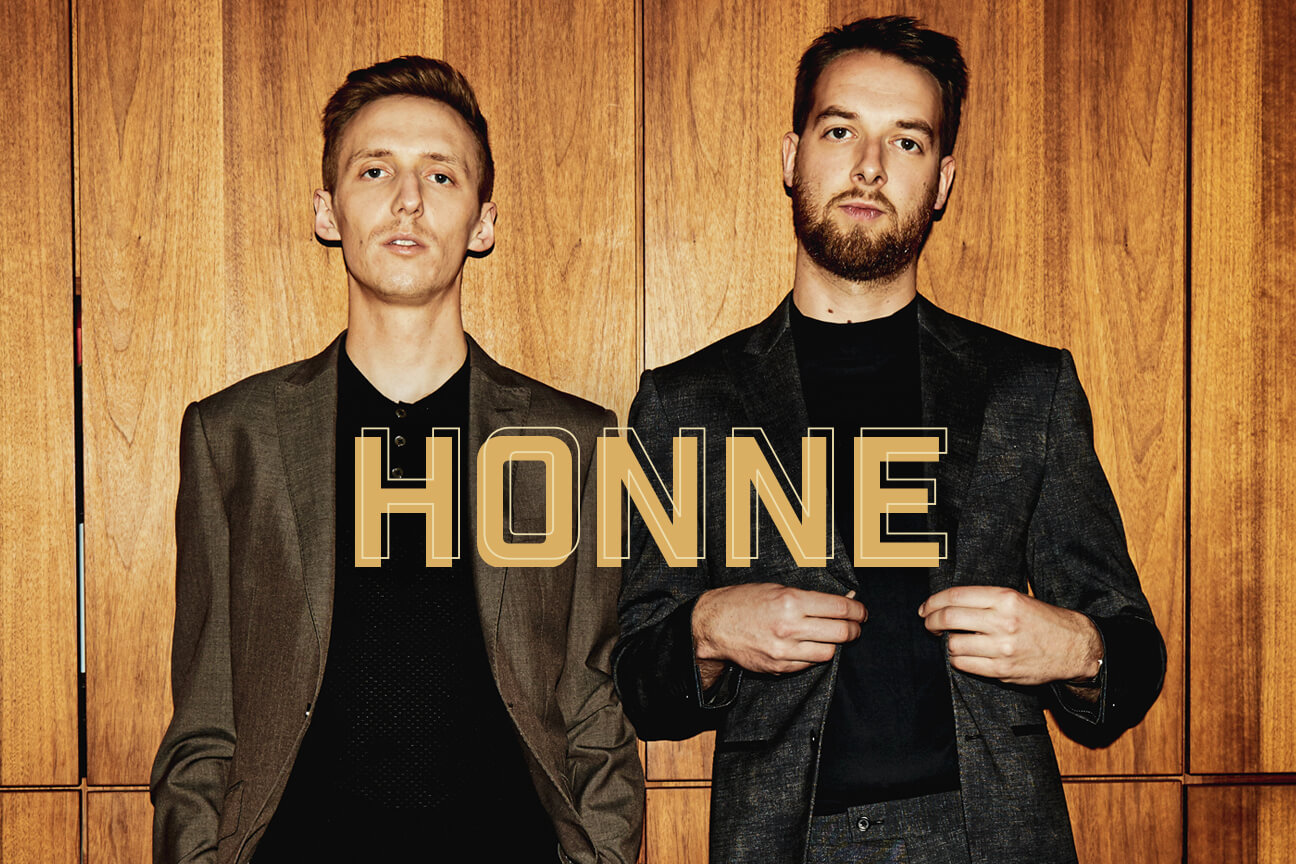 Andy Clutterbuck wants to change the way that he writes songs.

Clutterbuck and his bandmate James Hatcher are both great musicians, songwriters and producers, and have built a large following with their smooth, signature sound, but recently Clutterbuck has found new inspiration.

“I’ve been with my girl for 12 years, and we’re getting married this year,” Clutterbuck says, unable to suppress the grin creeping across his face. “From a lyrical point of view, the music [we’re writing now] is very romantic.”

With songs titled “Crying Over You,” “Treat You Right,” “Feel So Good” and “It Ain’t Wrong Loving You,” they’ve always had a penchant for the sultry and passionate, but now, five years after they first started making music together, Honne is finding its new voice—and it’s all about celebrating the power of true love and the joy of finding the one.

Both Clutterbuck and Hatcher are musical prodigies in their own rights: Not only can they both write and produce their own songs, on stage they’re both constantly switching instruments, effortlessly lacing in solos and soulful, improvised riffs.

Their first single, “Warm on a Cold Night,” received a radio debut and an endorsement from music industry king-maker Zane Lowe. Its steamy sound created a buzz on the London music scene, and after a series of sold-out shows, the duo inked a major record deal and got to work on their debut album.

Named after the single, the album Warm on a Cold Night opens with the smooth voice of a radio DJ named Tommy Inglethorpe explaining to listeners, “OK, it’s 3:17 a.m. … this next song’s gonna keep you warm on a cold, cold night.” The record lives up to the comically sensational opening, with songs that sound like they should be played at smoky late-night lounges or could provide the background music for a candle-lit dinner date.

The album garnered critical praise and cemented Honne’s growing reputation for making their own brand of indie pop fused with neo-soul. But when it came time for a follow-up, something happened to Honne: They saw the light.

After the success of their debut, Clutterbuck and Hatcher were able to quit their day jobs and commit to making music full-time. That meant all of those cold nights in the studio were over. Now, they could actually make music in the light of day.

And suddenly, their sound—which critics had literally described as “nocturnal”—began to change.

Now, you can hear the daylight in their music.

Their latest album, Love Me / Love Me Not, still has the soulful undertones fans have come to love, but this time around, songs like the bouncy “Day 1” and the foot-tapping “Me & You” are jazzy, windows-down, head-bobbers—not just a sultry nighttime listen.

Perhaps it’s not surprising that “Day 1” is their biggest hit to date, garnering more than 41 million Spotify streams: Clutterbuck says it was inspired by his fiancée. “It’s basically about her and all the time that we spent together,” he says, again with a grin. “So that’s it, as simple as that.”

And now that Clutterbuck is getting ready to get married to his longtime love, their sound is continuing to evolve. The early days of Honne were spent in dark recording studios while the guys were trying to balance the difficulties of young love and the challenges of pursuing a career in music.

But now, the prospect of marriage—and embracing the light of day—have changed how they approach music entirely.

“Our latest album is a bit more upbeat and summery because we wrote a lot of it in the daytime.”

This spring, they released remixes of some of Love Me / Love Me Not’s songs that infuse even more pop sensibilities into singles from the album. And as they work on their next project, they’ve pivoted from just writing about the romance of young love and the difficulties of heartbreak, to the joy of being in a lasting relationship.

“I feel like we’ve been writing a lot more just like in celebration of what’s coming,” Hatcher says, looking at Clutterbuck. “That’s it, isn’t it? The new stuff’s all quite full of joy, and yeah, the celebration of life and love and having a lovely time.”

Honne has finally made it through the night, and now, it’s time for them to enjoy a new day.

Majority of Voters in Both Parties are Religious, Study Finds