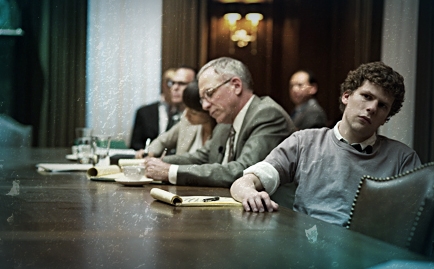 Shane Claiborne on a New Way to Pray

The Social Network was undoubtedly the film of 2010. The David Fincher epic about the founding of Facebook is the odds-on favorite to win the best picture Oscar and has been picking up scores of “best film” accolades in recent months. With a theatrical, chatterbox script penned by Aaron Sorkin, Network takes quite a bit of liberties with the retelling of the Mark Zuckerberg story, but most people seem OK with that. This isn’t a fact-concerned documentary. It’s a truth-concerned document. It may not be an accurate reporter of what happened with Facebook, but it’s a spot-on account of what Facebook is.

It wasn’t the only Facebook movie to come out in 2010. There was also Catfish, a “documentary” about a photographer who begins a Facebook romance with a woman of whom he later comes to doubt the existence. The documentary purports to be authentic and completely real, but many have wondered about how much of it actually happened as depicted. Is it really a documentary? Regardless, the film raises important, resonant points about the privacy and anonymity issues related to Facebook. The film’s credulity may be in doubt, but its thematic points about online identity are well taken.

The documentary-in-scare-quotes genre really had a banner year. In addition to Catfish, we had the infamous I’m Still Here, which touted itself as the biographical sketch of Joaquin Phoenix gone berserk. But, as we now know, the whole thing was an act, with nary a shred of documentary veracity. Joaquin Phoenix was playing the part of an A-list actor who lets fame go to his head. A command performance. Received with ire and a box office disaster, I’m Still Here nevertheless interested me in its commitment to exploring identity within the blurry-lined context of celebrity.

A more successful example of the scare-quotes documentary in 2010 was Exit Through the Gift Shop, the Banksy film about street art that may or may not be one big “gotcha” on the contemporary art establishment. Gift Shop is perhaps the best example this year of a film that looks and feels like a documentary but could very well be a largely fictional, Rauschenberg-esque pastiche of bits of facts and flourishes of embellishment and commentary. Again, the veracity of what happens in Gift Shop is subject to doubt; but the points it raises and the amusements it offers are not. It’s a valuable, supremely provocative and enjoyable film, regardless of its perhaps tenuous relationship to reality.

But almost everything in our digitized, cut-and-paste world these days has a tenuous relationship to reality. Perhaps that’s why these dubiously “true” films are nevertheless enjoyed and embraced, particularly by younger audiences. The idea of black and white, “true or untrue” doesn’t make much sense to a generation who has grown up with a steady stream of mediated half-truths, advertising, made-for-TV reflections on the news, The Real World, etc. It goes without saying that something can be enjoyable, moving, resonant, but completely fabricated. Even if it touts itself, with a wink, as “real.”

This Christmas I was struck by some of the wonderfully cheerful “Hallelujah Chorus” flashmob Youtube videos that were being sent around online. Many have doubted how organic or spontaneous some of these videos are (a familiar suspicion of amateur viral videos), and indeed how much what is happening can actually be called a “flashmob” as opposed to an elaborately set up group performance. But to me, it doesn’t matter. I don’t care if something like this happened as it says it happened; I don’t even really care if it happened at all. If it turns out this video was digitally made on a computer screen, or if everyone was an actor, I’d still enjoy the video. What it captures is joy, and the power of human voices joining in unison to take note of the glory of God and the beauty of life. It captures it viscerally, and I encounter it so.

It’s why we can be simultaneously savvy to the fact that most reality TV shows aren’t really “reality” at all, and yet still embrace them wholeheartedly. It’s why we can leave movies like Black Swan and Inception with no clue about how much of what we just saw was “real,” but not really caring (and sometimes kind of loving) that we don’t know. It’s why we can live much of our daily lives in the presence of disembodied digital phantoms and yet be happy with the tangible feelings and emotions that come with interacting with them. We all know the Facebook “people” we observe via update-feeds are probably unreal constructions of themselves, but who cares? We’re all a little bit unreal.

The whole concept of “reality” is so much cloudier and more dubious than it once was, and yet we press on and enjoy the little blips of recognition we find here and there in the Twitter stream of consumption and engagement. It’s about the present experience, the present recognition. The suspension of disbelief. But that’s precisely what the movies have always been about: suspending disbelief, winking to the slightly embellished reality of it all, welcoming truth and epiphany in bits and pieces, untainted by the elusiveness of the dominant but overrated specter of certainty.

Brett McCracken is the author of Hipster Christianity (Baker, 2010) and a regular blogger. This article originally appeared on his blog and is used by permission.

What the Oscar Noms Should Have Been