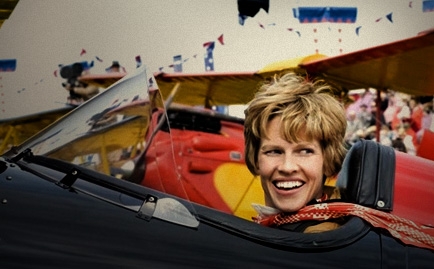 Hilary Swank has carved out a unique niche for herself in Hollywood, as a glamorous beauty in real life who brings an almost masculine intensity to her best roles—her Oscar-winning turns as a female boxer in the 2004 Best Picture winner Million Dollar Baby and as a sexually confused Nebraska girl who dresses and acts like a boy with tragic results in 1999’s Boys Don’t Cry. In both cases, she stunned the industry to become one of very few actresses to ever win more than one Academy Award.

Those accomplishments were all the more remarkable considering Swank had long been mired in projects like the title role in the misbegotten The Next Karate Kid and a ten-episode guest role on the original Beverly Hills 90210. Now she’s taking on one of America’s greatest female icons, playing the title role in Amelia, the first big-budget biopic of Amelia Earhart—who in the 1920s and ’30s became the first woman to pilot a transatlantic flight yet who disappeared while trying to be the first woman to circumnavigate the globe.

While the movie, never achieves dramatic liftoff and feels like it’s circling for a clear landing strip throughout its running time, Swank unmistakably lit up the room when she arrived at the Four Seasons hotel in Beverly Hills to talk about the film. Speaking prior to dashing off for an appearance on The Jay Leno Show, Swank addressed head-on her decision to take on physically challenging roles that redefine gender.

You’ve played a girl who wanted to be a boy, and then a boxer. Now you’re playing a tough-minded female icon, yet in real life you’re very glamorous. How does that affect your career in Hollywood?

I think being an actor we’re constantly objectified based on what we look like, how we should look, we’re not this enough or that enough. It’s easy to look at yourself in those terms. There are so many ways a person is beautiful. The fact that Amelia talked about herself humbly about her looks when she was so beautiful and accomplished so much showed that she stood up for those seeking equality and human rights, and that she was human in her dislike of herself.

What is the message you want to give today’s young women by portraying Amelia?

She’s a source of inspiration. I’ve never had such an outpouring of people coming up to me saying they can’t wait to see this film. Usually you get an iconic image of who she was from textbooks, but she was a woman in a time when following your dream was a man’s job. Take it a step further, she made no apologies for really living her life the way she wants to live it. In 2009 she’s ahead of her time for thinking that way. It’s challenging to live the way you want whether a woman or man. More than anything that’s what people are responding to. It’s exciting especially in difficult economic times to see women 70 years later dealing with a lot of the same issues.

How have you had to overcome the limiting preconceptions of casting directors in Hollywood?

Everyone has an opinion about you, and it’s difficult when you’re pursuing your dream. I had someone tell me I was too half-hour, a sitcom actress, when I was going in for auditions as a film actress. Some advice helps, but some is silly and you push it to the side and try not to take in. The person who told me all I’d ever be is a sitcom actress now pretends they never said it.

How much access did you have to actual footage of Amelia, and how did it affect your preparation for the role?

I know exactly to the minute of how much newsreel of Amelia talking—16 minutes. Her appearances speaking were limited and often were when she had her public persona on. I saw 45 seconds of her not-for-public face, which was very insightful for me. I didn’t want to be parroting her. Her accent and cadence were specific. Those were big shoes to fill, it was a daunting task. I felt it was something I had to study to do justice. I studied the footage of her we had, literature we had on her, and first-hand stuff from her letters. Getting to know what she wants, you had to read between the lines, because she wouldn’t express it much on page.

What about Amelia surprised you the most?

I really think I didn’t recognize truly how unapologetically she lived her life. She was quite remarkable. The more I read about her the more endearing she became. Usually you read more and you find the “Whoooooa!” moments of scandal. But this is someone I really would want to meet, talk with and learn from.

Did you learn to fly for the film? And what do you think happened to her in her disappearance?

Yes, I definitely learned to fly! It was as exhilarating and freeing as she writes about. I get it! But I believe she ran out of fuel. I know there’s a lot of different ideas—that she was kidnapped by the Japanese, or stranded on an island. A lot of people say maybe it wasn’t the right way to end the movie, to leave her flying but worried about what’s next. Maybe if it’s successful we’ll say she landed and bring her back for a sequel. That would be funny.

Lighten Up with Flash Mobs

Even Bigger Than Relient K