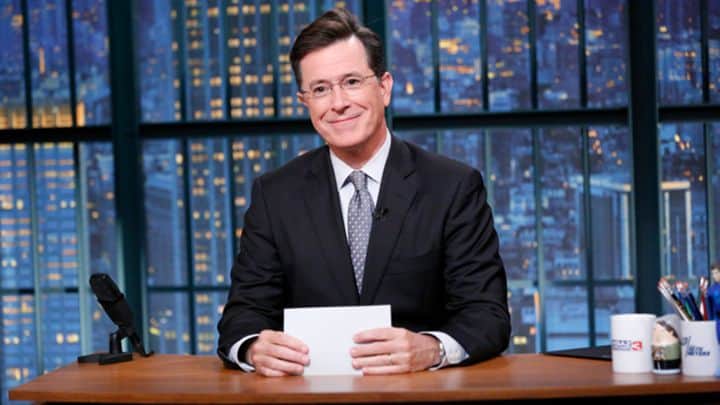 Last night, Stephen Colbert took over The Late Show, the first host to do so since David Letterman took the host’s chair 1982. Sure, it was one of the funniest installments of late-night television in recent history. But one thing was missing. The character “Stephen Colbert” that sat behind the desk at The Colbert Report for 1,447 episodes was nowhere to be seen.

“I used to play a narcissistic, conservative pundit,” Colbert explained to guest, Jeb Bush, seemingly in an attempt to derail the politician’s overly-rehearsed talking points. “Now I’m just a narcissist.”

Despite fears that the true Colbert wouldn’t be a draw, it made sense for the comedian to leave his alter ego back on basic cable. On Comedy Central, The Colbert Report operated under its own code—jokes like his super pac (“Making a better tomorrow, tomorrow”) and presidential run teased out over several weeks for maximum impact. Faux news segments like “Better Know a District” and “Tip of the Hat, Wag of the Finger,” would come and go at will. And in the case of Radiohead’s visit to the show, the half-hour format was thrown out the window completely in favor of an extended, hour-long program.

But on the first night of The Late Show, Colbert was forced to reintroduce himself through gags that have become late-night tropes. There was the cold open, where the comedian sung the national anthem across America before being surprised by an umpire-masked Jon Stewart. (It was a safe bet that we’d be seeing the Daily Show host at some point during the show.) The monologue, where—despite Colbert’s best attempts to summon his inner Letterman, we learned that he is in his zone when attempting to ride jokes off the rails rather than delivering one-liners. A stint behind-desk segment, where Colbert combined two of his greatest strengths, absurd visual humor and political wise-cracking, to great effect, shoving Oreos down his throat while discussing Donald Trumps’ presidential bid. And then there were the extended interviews with both Bush and George Clooney.

It was the interview segments where Colbert was given a chance to truly wink at the establishment, perhaps hinting that we haven’t seen the last of his buttoned-up alter ego. Awkwardly, Clooney’s interest in Darfur was lost in Colbert’s race to a joke—the promotion of a movie that didn’t exist and the presentation of a wedding present—a paperweight with the engraving “We Don’t Know Each Other.”

“We always have something to talk about,” Colbert joked with Clooney. “We’re famous.” The punch line, where the two shared an awkward/disgusted moment of (staged) silence, said it all.

Despite being in the position of having to feel out the new format, Colbert kept the show running surprisingly well. The night ended with Mavis Staples and a celebrity band that featured members of Beirut, Alabama Shakes and Ben Folds joining with Colbert to perform Sly and Family Stone classic, “Everyday People.” The joyfulness that Colbert attacked the musical performance seems to be indicative of what’s to come.

We may still be getting to know the real Colbert, but one thing is for certain. He’s a man of the people—and that’s no act. Bumps in the road and all.

What the Massive Appeal of Taylor Swift Says About the Church