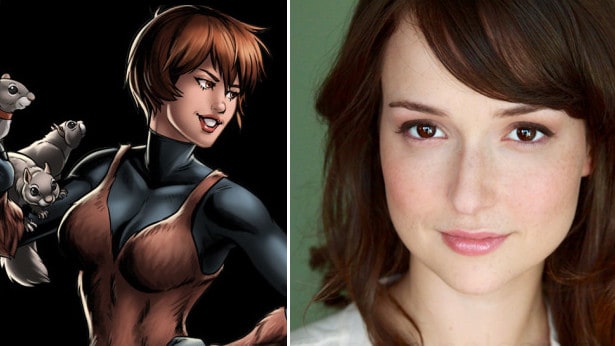 Marvel’s taking its franchise to Freeform, with two new superhero shows aimed at a younger, angstier set than their brooding Netflix dramas, polished ABC shoot-em-ups and the movies. And now, we’ve got a cast listing for their New Warriors show.

In the comics, the New Warriors are mostly C-listers—a group of young, wannabe Avengers who hit the streets cleaning up the sort of crimes that fall a little below the pay grade of Thor and Captain America. But in recent years, one New Warrior has risen through the ranks of fandom to become a true cult favorite. The unbeatable Squirrel Girl—a one-time gag character with squirrel-like powers, has become a minor sensation, largely thanks to an excellently written comic series by Ryan North.

She’ll be on the New Warriors show, and played by Milana Vayntrub. You might have seen Vayntrub on This Is Us recently, but you’ve definitely seen her on the ubiquitous AT&T commercials, where she’s showcased a winning sense of comedic timing. Remember the name Milana Vayntrub, because we expect this is not going to be her last high-profile gig. (Fun fact: producers apparently wanted Mae Whitman—Anne, from Arrested Development—for the role, but she was tied up in other commitments. Still, the part was written with her in mind.)

Rounding out the rest of the cast, we’ve got Baby Daddy’s Derek Theler as Mister Immortal. who has the handy super power of not being able to die. Jeremy Tardy (War Dogs) will be playing Night Thrasher—Marvel’s fairly obvious answer to DC’s Batman. Disney Channel alum Calum Worthy will be playing Speedball, who has powers that might be best described as “bouncy.” Matthew Moy, making the leap from Two Broke Girls, will play Microbe, who can communicate with micro-organisms. And relative newcomer Kate Comer will play Debrii, who can move things with her mind.

Given the nature of these powers, it’ll probably come as little surprise that this show is being pitched as pretty heavy on comedy.

The show’s already got a full series order and will debut in 2018.