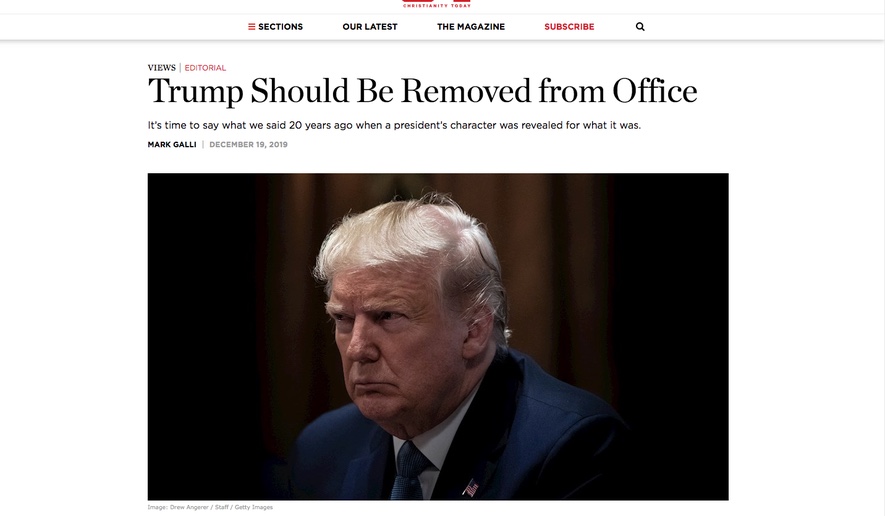 On Thursday night, the evangelical standard-bearer Christianity Today, which was founded by the late Reverend Billy Graham, published a stunning editorial calling for President Donald Trump to be removed from office.

Outgoing CT editor in chief Mark Galli called Trump “a near-perfect example of a human being who is morally lost and confused” in the editorial, which drew so many clicks that the website crashed for a few minutes.

The editorial drew an enormous amount of attention, not the least of which came from its newly impeached subject, who called CT a “far left magazine” and referred to it as “ET”.

Franklin Graham, son of Billy, who founded Christianity Today, has become one of Trump’s staunchest evangelical supporters, and he expressed his displeasure to the New York Times. “My father would be embarrassed,” he said. “It is not going to change anybody’s mind about Trump. There’s a liberal element within the evangelical movement. Christianity Today represents that.”

Reverend Samuel Rodriguez, who sits on CT‘s board, expressed surprise to the NYT. “Christianity Today is very apolitical,” Mr. Rodriguez said. “We don’t do politics, we don’t even bring up politics in a board meeting. I don’t think it should affect anything.”

But Lisa Sharon Harper told the NYT that she saw the editorial as a good step forward. “The heart of white evangelicalism is realizing that its pulse is weak, and that there is sickness in the faith. The fact that it took them so long is something they must learn from,” she said. “But I’m glad they spoke out.”

Jamie Foxx on Why the Church Should Be More Loving, Inclusive and Unifying