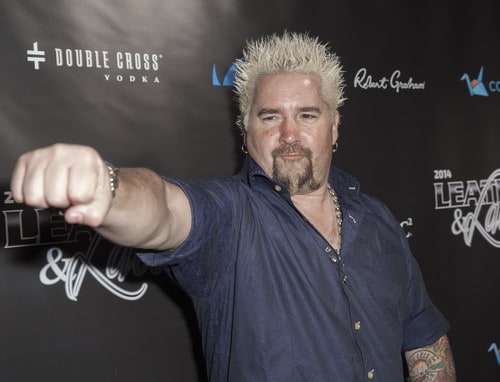 Comedian Shane Torres helped revive Guy Fieri’s celebrity status with a bit in which Torres commends the chef for being “a good Guy,” and asks, “Can someone please explain to me, what Guy Fieri ever did to anyone? As far as I can tell, all he ever did was follow his dreams.”

After this week, we have a good reason to jump on the Fieri bandwagon.

The award-winning TV personality travelled to Redding, California, over the weekend, where a deadly wildfire has evacuated up to 14,000 people and destroyed over 700 homes. At least six people have been killed so far. Fieri worked alongside the Salvation Army to feed evacuees, organizing nearly 20 volunteers and setting up a temporary kitchen to serve meals.

‪Chef James from @sheraton_redding stepped up HUGE with pasta salad and coleslaw for 1000 people for lunch and in for another 1000 tonight. Real deal!!

“We just did lunch for 750, and we are getting ready to do dinner for that same group right now, trying to keep the menu interesting,” Fieri told a reporter. “It is unbelievable to see what folks are going through, but also how great this community is …We are in tough times in the world, with all the things going on, and boy, you take a moment like this, and you really see what America’s made of, a lot of great people coming together.”

How could you not love this Guy?

Watch Angela and Oscar Recreate Their Favorite Scene From ‘The Office’