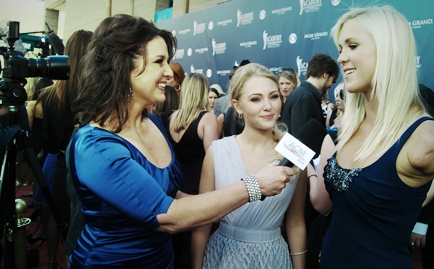 The past seven years have been a roller coaster for Bethany Hamilton. A native Hawaiian, she was only 13 when her left arm was bitten off in a shark attack while she was surfing in preparation for a major competition. It was believed by many that she would never surf again, both out of fear of sharks and the ocean and as a matter of practicality since surfing normally requires both arms to paddle out against waves, as well as for balance once riding a board.

But Hamilton quickly proved that she was no ordinary girl, and through a combination of outsized courage and her immense Christian faith, she was back on the ocean a month later and has since regained her status as a champion surfer. Her story has formed the basis of her own best-selling memoir, Soul Surfer, and the new movie of the same name, in which she is portrayed by her favorite young actress, AnnaSophia Robb (The Bridge to Terabithia).

Bethany and AnnaSophia sat down last week at a press event in Los Angeles to discuss the movie and the impact it and the real-life events it’s based on have had on their lives.

This started as a small indie film, and quickly grew bigger to become a $15 million film out in 2000 theatres with award-winning movie stars. How’s the Hollywood experience been for you, Bethany?

Hamilton: I’d been to stuff like the ESPY Awards (ESPN’s annual awards for televised sports), but this was way more exciting because it was my own movie about my life, and I had AnnaSophia playing me. My friends from Kauai were there at the premiere, so we had a blast.

What was it like taking on the life of Bethany?

Robb: I was incredibly flattered and really curious about Bethany. The director said Bethany and her mom recommended me for the role and I said, (happily surprised) “No way!”

Hamilton: If you watch her in Bridge, it’s intense and you see strong friendship in it. I was picky about who played me, but she’s a great actress and I felt she matched who I was.

What inspires you in life?

Robb: What inspires me is seeing little acts of kindness, and faith is a big part of my life. I love when everyone pulls over for an ambulance even in these times, when we’re encouraged to be selfish.

Hamilton: So many things inspire me, but do whatever you’re interested in. I’m wanting to honor God in everything I do. I’m not perfect at it, but it makes life exciting and different. It’s hard here, being away from the ocean. My skills aren’t on dry land.

Robb: I learned a lot from Bethany, including how to surf. Not to Bethany’s extent, but I do love it. I also came out to visit Bethany on my Christmas break from school. But I also learned about the big picture in life from her. They say when man makes plans, God laughs. But Bethany didn’t quit. She said, “This is what I love and will continue doing.” It’s been not a curse but a gift for her.

Do you have any “never quit” advice?

Hamilton: I read some motivational books. Find your passion, because it motivates you. A lot of people want to be famous but unless you have a direction and goal with it, what’s the point?

Robb: I love the quote, “Be yourself, because everyone else is taken” by Oscar Wilde.

Was it hard watching the shark attack scene in the movie?

Hamilton: For the most part, I’ve healed really well. I was blessed to go into the editing room and give feedback. Editing affects the entire tone of a film. I wasn’t happy with the first edit, so I wanted to make it more real. I was calmer after the attack than they portrayed me in the film, so they had to tone it down. It just came naturally to me to be calm, but if I had panicked I’d have lost way more blood.

Is there any other way in which the film has changed your life, Anna?

Robb: Bethany has changed how I eat, and I stay away from dairy and go toward organic foods.

Hamilton: Kauai is a natural hippie town with local farmers’ markets and fresh produce. It was a fad to eat healthy when I was in high school, and that stuck with me. What we eat affects everything with our body and mind.

Making a Point on Mr. Sunshine