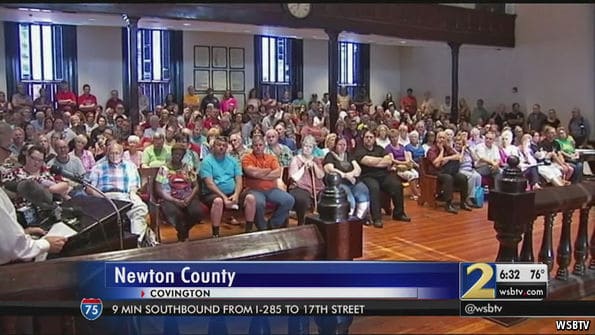 Newton County, Georgia—40 miles southeast of Atlanta—is currently in the middle of a fight over plans for a new mosque. Mohammad Islam, a 50-year-old imam, has been running his mosque out of a ranch house in Doraville, Georgia, for the past 11 years, but with the drastic growth of his membership, he’s had to expand the size of the mosque.

Islam found 135 acres of land across from a Baptist church and cemetery where he could build a mosque, a cemetery and a separate mosque that would host funeral rites.

Last year in August, Islam finalized the deal to buy the land with approval from Newton County. His plan is to only use a portion of the land for the mosque, and the rest could be a park, housing and a religious community.

Things began grinding to a halt when word got out about the plans to build the mosque. People from the community objected, going as far as to build a Facebook page called “STOP the Mosque Newton County Ga.” The page’s about section reads: “Let’s get together on this folks! Do your research on Al Maad Al Islami’s plan for 135 acres at the corner of 162 and County Line Rd. We must STOP this!!”

Last week Newton County officials placed a moratorium on constructing any place of worship to investigate the potential impacts of traffic and noise in the area.

Many people are calling out the Islamophobia that may be at play with the moratorium on the mosque.

Edward Ahmed Mitchell, the executive director of the Georgia chapter of the Council on American-Islamic Relations, said, “This wouldn’t have happened if this was a Protestant church.”

The county held town hall meetings in Covington, Georgia, to allow residents’ voices to be heard. There seemed to be a general split in opinion of those who spoke publicly.

“We have already seen bombings and beheadings,” said one woman. “Eight years ago our U.S. government got a Muslim president who has put Muslims in power.”

A Jewish woman spoke against the perceived discrimination: “If this discussion was happening 100 years ago, there’s a good chance it would be happening to my people. And a hundred years or so ago, millions of people my people, including my great aunt, were sent to their deaths.”

Legally, the county’s moratorium may violate a federal law—the Religious Land Use and Institutionalized Persons Act—which makes it illegal for local governments to place a “substantial burden” on houses of worship and their function. The NAACP has also advocated with CAIR to call for the U.S. Department of Justice to investigate—which they will.

Islam is not discouraged by the dissent. He plans to embrace the community beginning with a lunch invitation at his current mosque.

“If you have doubts, we welcome you. If we open a dialogue, we hope they will see that the rest of people can live side by side with us. We think they’ll eventually be our neighbor.”

‘The T.D. Jakes Show’ Will Air on Oprah’s Cable Network

What If Someone You Love Is Addicted to Drugs?