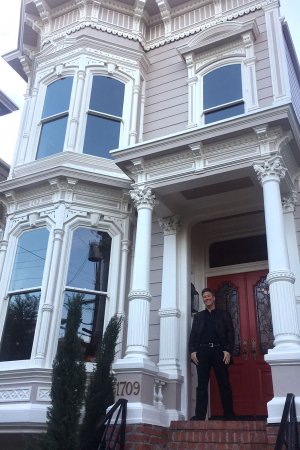 The creator of Full House has just purchased the show’s iconic San Franciscan home. The Hollywood Reporter recently announced that the series originator, Jeff Franklin, purchased the house for $4.15 million.

Franklin told The Hollywood Reporter, “The house came on the market and really, I just thought, I have to buy this house. I’m so sentimental about the house. It’s great to have the house in our Full House family and be able to preserve it for the fans. … Seriously, I love owning this house.”

Apparently, Franklin wants the house to be a gift to the fans and has plans to make the property look as close to the Tanner family home as possible. He reportedly has already made some renovations to the exterior by painting front door back to its original red. The creator of the ’90s sitcom also told THR about some of the other plans he has for the Full House-house.

“I need to do some construction work on the inside, and do a seismic retrofit so the building is safe. It still has the original, brick foundation from 1883, and the whole house needs to be brought up to code.”

The project could take a while, but if Bob Saget taught us anything it is this: Good things take time.

*Cue the music and the family hug.*

Can You Be Content in a Culture of ‘Never Enough’?

Dolly Parton Will Give Homeless Families Affected by Tennessee Fires $1,000 Each Month