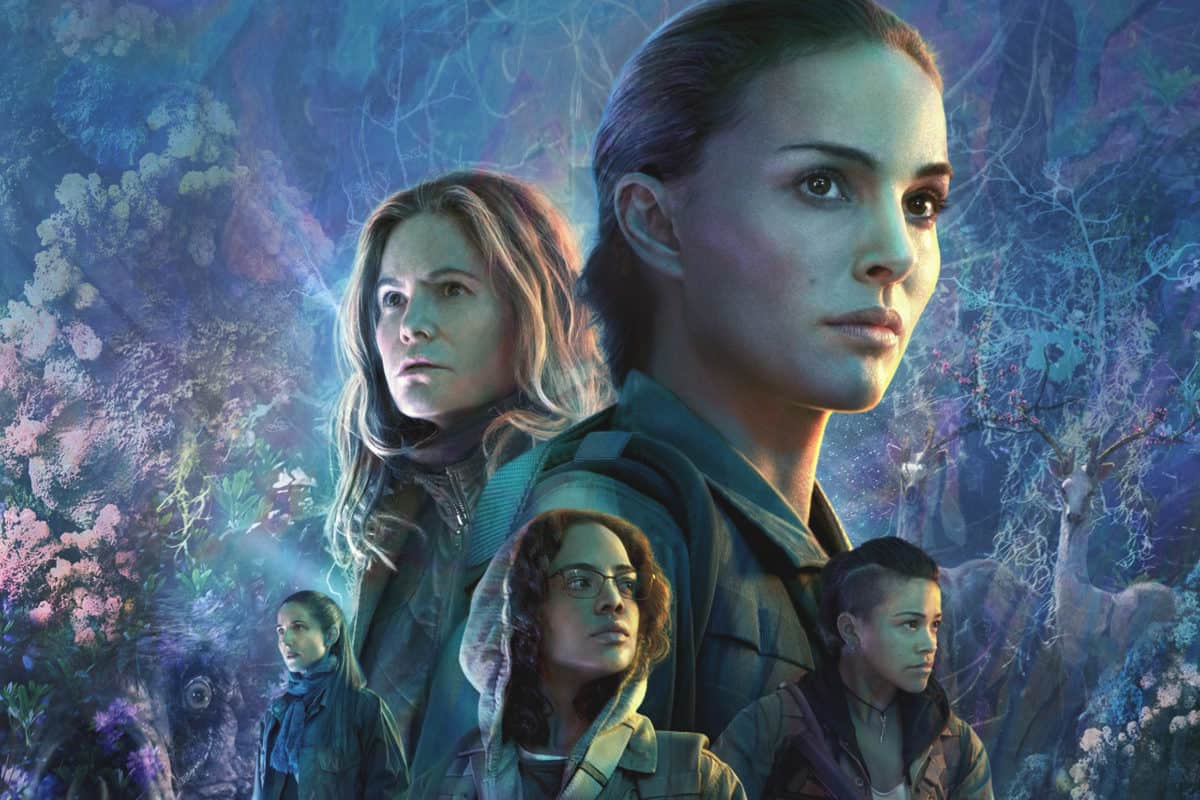 It’s probably best to start simple: Annihilation works. From start to finish, you’re always in the mindset the movie wants you to be in: awestruck, terrified, even at a complete and utter loss. On the other hand, it’s a dense, elusive movie, and if you like things in tidy packages, best steer clear. This one is not easy.

The premise is straightforward enough: A woman’s husband contracts a fatal illness from a quarantined region known as the Shimmer, so she goes in with a team of scientists to find the source of the Shimmer and save his life. The Shimmer is a paradoxical horror-show, an out-of-time world that mutates into something more and more terrible the closer the team moves to its center.

Annihilation has as many questions to ask as it has “things to say,” and that’s why it’s challenging. It uses its story to speculate on a bunch of nuanced, complicated, twisty ideas, but many of those ideas end with a question mark instead of a period. A full reading of Annihilation therefore not only requires you to come up with your own answers, but also consider what the questions were in the first place. No easy task.

Our only clue, from the mouth of Garland himself, is that Annihilation is about self-destruction. Seems legit. As our heroes (an excellent all-female ensemble featuring Natalie Portman, Jennifer Jason-Leigh, Tessa Thompson, and a never-better Gina Rodriguez) venture farther into the Shimmer, their personal vices are made manifest in ways both tangible and ethereal.

A self-harming character is mutated from within, a former addict lashes out, and a manipulator is forced into subservience. It’s grotesquely poetic, but the clear delineations between character, transformation, and environment are never quite one-to-one. The Shimmer refracts and permeates everything it envelops, and likewise, the questions and answers here take on a multitude of edges and sides. Writing it out in summary is an exercise in oversimplification, and thus futility.

The movie does work hard to help you keep up, though, and to its credit, you can come away with at least a starting point for navigating its dense thematic maze. The team puts their scientific know-how to good use throughout the journey, posing hypotheses to each other and running experiments on the world around them. Some of these scenes hold your hand a bit, but in retrospect, they’re blessedly welcome for their half-explanations, especially given the final half-hour’s total abstract insanity.

Annihilation’s third act is the best of 2018 so far, and could be debated among film buffs for the rest of the year. The movie’s plot vaults into a fresh plane of psychological wonder and terror, and the themes rush to take their place, creating something so visually and aurally stunning, yet so logically baffling, you’re unlikely to shrug it off. It’s here where you’re asked to fully wrap our minds around the questions and answers the movie is engaging with, but with just one viewing, that’s near impossible. Nonetheless, a few things emerge.

The most explicit idea Annihilation puts forward is that self-destruction is a natural human tendency. It’s so natural, in fact, it’s ingrained into our biology, given the conflict between our cells’ ceaseless procreation and our death’s universal assuredness. In other words, humans are destructive because something inside us orients us to be that way, even if the natural world is oriented toward survival instead. It’s a scientific idea that relies on instinct for its evidence. Whether your path to that conclusion is spiritual, evolutionary, or both, it checks out with human experience. That’s the first connecting point.

From that premise, things branch out in a variety of directions, but one permutation resonates a bit louder than the others. It’s only a mild spoiler to say that in Annihilation, the characters’ innate self-destruction brings them face to face with the movie’s title, but there is a notable exception, and what sets that case apart is purpose. One character has a reason to survive, a reason to resist the parts of her that incline toward death, and that drives her to fight the Shimmer instead of give into it. It’s exhilarating, and it refracts the movie’s conflict into something gorgeous and complex: The woman against the environment is also the woman against herself. The two battles are waged on the same landscape.

There are consequences, though. Annihilation also underlines clearly that our self-destruction is not singular and solitary, but rather contagious and emissive. Just because one person has found a path away from their self-destruction doesn’t mean they aren’t affected by other, opposite paths. You might refer to that self-destruction as sin, or evil, or illness, but regardless, that ultimate takeaway bestows Annihilation with a weight of responsibility.

Self-destruction is never contained. It’s communal. Our damaging decisions matter, but there’s another side of the coin. As our self-destruction permeates others, so do our acts of restoration: service, giving, sacrifice. It lends far-reaching consequences to even our smallest choices. That’s the key to Annihilation, but it’s the key to redemption, too.