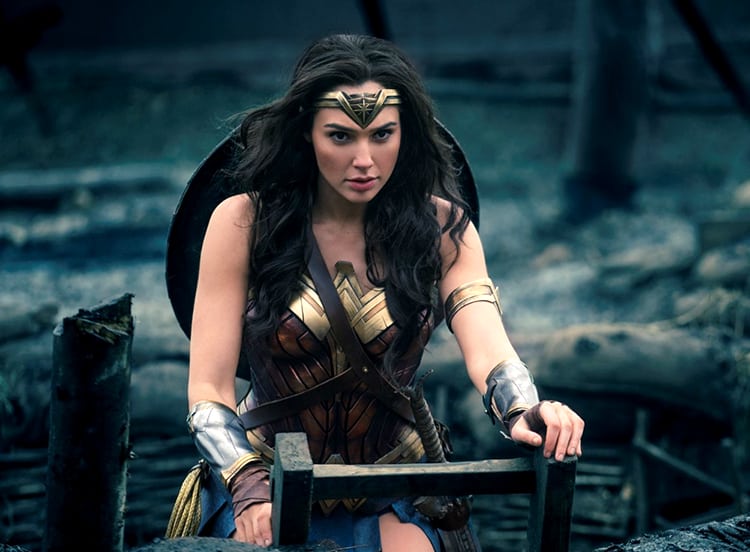 Warning: This article contains some spoilers for Wonder Woman.

The best scene in Wonder Woman already has a nickname on Twitter: No Man’s Land. If you’ve seen the movie, you know the part. It’s Diana’s big reveal, where she defies the military pragmatism of Steve Trevor and climbs out of the trenches, drawing enemy fire and leading the Allies on a rescue mission into an occupied city.

It’s being called No Man’s Land, because that’s what Trevor refers to as the space between the trench and the town. But the title is sneakily on the nose for other, obvious reasons. Though the triumph of femininity here isn’t made as explicit as, say, Eowyn’s “I am no man!” in Return of the King, what’s implicit is often more striking than what’s explicit. Even in our current glut of superhero movies, it’s saying something that this scene still feels so thrilling and inspiring. It’s not everyday you see a superhero doing something truly heroic.

But No Man’s Land is also the moment in which Diana is forced to face a sharp contradiction in her worldview. On her utopian island of Themyscira, she nurtured a belief in mankind’s inherent purity. She saw herself as being groomed to protect a kindly race of benevolent mortals. But in her first steps out of the trenches, this belief literally comes under fire. These are the people she is sworn to protect, and they are trying to shoot her dead.

Perhaps you’ve met a similar fate if you’ve ever fostered a deep love for humanity. You become a pastor, a teacher, a parent, a counselor or even just a friend, believing in your heart that you can help someone else achieve great things. Next thing you know, these very same people are reaching for your throat.

The trick for us, he says, is to live between the two. We are not in Eden, as much as we might like to be. We have to be aware of evil. But we also are not in Heaven. We have not overcome evil. We must learn the practice of holy discontent. “Living back in Eden or ahead in Heaven is ultimately an unreal life that saps the passion from our lives,” he writes. “This theology makes us content and calls us to nothingness.” Instead, we must learn to be the sort of person who “is discontent” and “desperately seeks to join God in redeeming a tragic world, not dismissing a tragic world.”

Wonder Woman’s first act finds her in a sort of Eden. Diana, played with star-making charisma by Israeli actress Gal Gadot, lives on an island populated entirely by women. And not just any women, but Amazonians—wise, fierce and awesome. Evil is a distant rumor, a bad bedtime story. She is raised believing a fairy tale about the good mortals of earth who have been corrupted by Ares, the vengeful god of war, who can only be killed by a mystical sword known as “the godkiller.”

And if those who raise Diana don’t exactly tell the entire, ugly truth about the world, well, can you blame them? She’s just a child.

I’m familiar with this sort of childhood, in a way. What are our big churches and big Sunday School classrooms if not cheap riffs on Eden, in which the world is split into black and white and Bible stories are boiled down to their most simplistic readings? The story of little David slaying mean old Goliath, with never a hint of Bathsheba or Absalom to sully the details of who the good guys and bad guys are. The story of strong Samson and his jawbone—his dalliances with Delilah breezily scuttled over to get to the big finale where he brings the house down on the Philistines. All of this squeezed out in bite-sized “lessons” with a practical application tacked onto the end. It’s a good way to learn about the Bible. Too good, in fact, to be true.

But Sunday School can’t last forever, and neither can Diana’s training. She is under the impression that this World War is being masterminded by Ares, who is corrupting mankind and driving them to evils they would never otherwise imagine. And so, she figures, if she can just knock this god back on his divine behind, humanity will be set right and innocence can be restored to earth.

You hear this sort of talk a lot. Churches like to issue marching orders against “the Enemy.” Got a problem with racism? “It’s not a skin problem, it’s a sin problem.” Climate change? God will fix it. Simple, easy answers to complex problems. When all you’ve got is a godkiller, every problem looks like a god.

In many movies, innocence becomes a character’s liability—a source of weakness. Think of the fish-out-of-water hijinks in movies like Enchanted or The Little Mermaid, where female naivety (they’re almost always women) is played for laughs. Think of the virginal ingenues in horror movies, generally reserved for the final sacrifice.

Wonder Woman inverts this trope, making Diana’s innocence a source of strength. She fundamentally believes that humanity is good and worthy of protection, and this fills her with a level of compassion and courage that her more cynical colleagues don’t have. “We can’t save them all,” Trevor says, urging Diana through the trenches of No Man’s Land, trying to turn her attention away from the occupied village.

Why Do Horror Movies Use So Much Christian Imagery?

This is the true paradox of innocence. Wonder Woman’s unfamiliarity with the modern world is why she gasps with delight over a baby and an ice cream cone, but also why she hurls herself into a bell tower to take out a sniper.

But innocence without redemption is incomplete. When challenged, Diana’s deeply held beliefs in the goodness of mankind are found to be a little wanting. Ares is not wholly to blame for war and violence, it turns out, but when faced with the fact the humanity may not be as cherubic as she assumed, Diana doesn’t abandon her principles; she just expands them. She doesn’t become discouraged, but she doesn’t bury her head in the sand either. She maintains what’s true about what she believes and adds a bit of real-world wisdom and experience to it.

This is a rare thing, but lovely when it happens. Idealism tends to crumble when it faces reality, disintegrating into cynicism. Think of all the cranky former idealists you know who gave up on trying to change the world as soon as it became clear their mission would be a lot harder than they originally thought. Their only goal now is to get to Heaven—no need to exist in the now and join the fight to overcome evil.

Conversely, think of all the stubborn idealists who stick their fingers in their ears and refuse to acknowledge that life might be more complicated than they were led to believe. These people are trying to stay in Eden, refusing to acknowledge the existence of a real threat.

These are two sides of the same coin. Both are understandable reactions to a cruel and fallen world, but neither are particularly wise, and certainly not redemptive.

What Diana does is soldier through to redemption—through a refining process that leaves her principles intact, her innocence secure and her redemption in motion. This is where marching through No Man’s Land will get you, if it doesn’t kill you first. You’re out of Eden and on your way to Heaven. You know you can’t save everyone along the way.

But that’s what you’re going to do.

What Every Millennial Needs to Know About Life After Graduating College