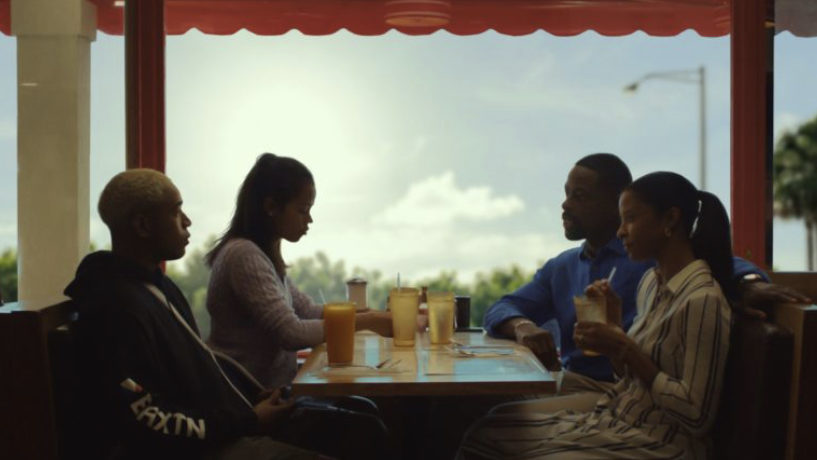 Waves is a difficult movie to categorize. It’s not autobiographical, but it’s drawn from deeply personal experiences. It’s not scary, but you might find yourself watching through your fingers at some parts. It’s grueling but also shot through with life-affirming themes of redemption.

The story of one family’s tumultuous experience with grief, pain, love and forgiveness resonates on levels both systemic and deeply individual. The dynamite leads of a mother and father (Alexa Demie and Sterling K. Brown) and their wide-eyed children Tyler (Kelvin Harrison Jr.) and Emily (Taylor Russell) all deliver unforgettable performances, and the soundtrack — anchored by a score from Trent Reznor and Atticus Ross, along with one of the best movie playlists to come along in years — brings the affair to the fulness of its immersive potential.

We recently sat down with Waves writer and director Trey Edward Shults, who told us about how the script came together and the challenge of creating a redemption story that felt earned instead of cheesy. (This conversation has been lightly edited for length and clarity.)

RELEVANT: How did the script come together in the first place? Did you envision it like this all along or did the unique framework evolve over time?

TREY EDWARD SHUTS: It evolved over a long time, and it kept evolving. There’s a lot of personal stuff in the movie, so a lot of that was just living life honestly, living good things and bad things and getting on the other side of those things to have any perspective.

I think meeting some key people and key relationships — whether that’s my parents and my family, or meeting my girlfriend and taking things from our relationship, to meeting Kelvin [Harrison Jr.] on my last movie and collaborating with him and pushing the story to a new place. It was really all that stuff tied together that brought it to where it is.

You chose to film the movie in a deliberately disorienting way, with lots of shots rotating around the subject. What was the process for choosing that? I’m sure some people asked “Can’t we just shoot this a normal way?”

It’s the perfect visual representation of what young love can feel like, right? It can be free and beautiful but also chaotic and scary. It feels like their relationship. It feels like Tyler’s headspace.

Honestly, the approach with everything and how it’s shot was to get us closer in an immersive, visceral, subjective way to Tyler’s experience and then Emily’s. We’re letting them dictate our choices for everything. Why the camera’s doing what it is, what the aspect ratio is doing, the music, the colors, are just helping us ask where are they on their journey? How do they feel?

This movie felt like a story about redemption. In my line of work, I’ve had, I’ll say, the misfortune of covering a lot of cheesy movies that have tried to tell stories with a similar theme but so often, stories of redemption, forgiveness and love can feel very pat, cliched or unearned in a way that your movie doesn’t. How did you wrestle with that?

It was a combination of drawing on real-life stuff and drawing on loved one’s stuff and then just being honest with it, not shying away and actually going there and exploring all those aspects so that hopefully, when we get to the redemption and we get to the hope, it does feel lived in and earned and honest.

It was intimidating, thinking about it in a broad way. But then once we actually started writing, it was more just a challenge of putting all the pieces of this whole story together. Once they were there, it was just being honest with the good and the bad, and not shying away from that.

I definitely think it helped that you never looked away from anything that happened, good or bad. It was almost unbearable at certain points.

It’s almost unbearable for this family too. It is unbearable, so pushing that as honest as we could to where, at least for me, personally, I’m craving that redemption at the end. It’s earned because I’ve been through the wringer, and I needed it at that point.

There have been some conversations in recent years over movies that involve white directors telling stories about the black experience in America — and a lot of people feeling like some of those movies missed the mark. How did you approach that very sensitive issue with regard to Waves?

For me, it was all in Kelvin. Kel and I met on my last movie and we loved each other and wanted to make something together again. I had the broad strokes of the story in mind, and I was telling him about it and he was gravitating to it and we were like, let’s figure this out. How can we do this?

So about a year after shooting that movie, I started trying to write. That was us doing what we called “mini therapy sessions” in talking about our experiences at that age: the commonalities and differences. [ED NOTE: We talked to Harrison Jr. about this experience as well. You can read his interview with RELEVANT here.]

So basically, we were doing that. Then I’d write and put together a draft and then get that to Kel. That was probably eight months before we shot anything, so we’d just keep working together and he would read it, give me notes, I’d go back and write.

It started at a base level of love and trust, and then trying to understand and translate. It became a beautiful fusion. It started with this deeply personal thing and then moved to looking at it from the outside and understanding this person I love and trying to be honest with that and honest with his thoughts and emotions and everything that he wanted as well.

So that’s why it changed what this movie was. It clicked this movie into place. It’s one of the best collaborations of my life and that only made it stronger and stronger. I love Kel so much. I just felt a lot of responsibility to do that right and be sensitive and listen. It’s just listening and trying to understand.

Music was a huge part of this movie. Was there a song that you got that felt particularly important for you to get into the movie? That you felt like was the real heart of the movie?

So many. It’s hard to boil it down to one because, well, any day it could be a different one. I mean, there’s a lot of really important Frank Ocean tracks: “Seigfried” was huge. “Rushes” was important to me. Even that “FloriDaDa” [by Animal Collective] track he has when Emily jumps in the water was huge. Radiohead’ “True Love Waits” at the end really captured a lot of the spirit, and [Alabama Shakes’] “Sound and Color” felt so spiritually connected to it. I don’t know. I’m not good at picking just one!

Want to See ‘The Mandalorian’ Intro Remade as an ‘80s Sitcom?