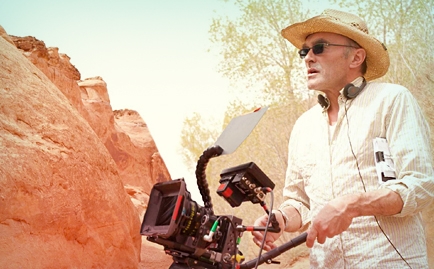 Today the Oscar nominations were revealed and, as expected, 127 Hours was nominated for Best Picture, along with a Best Actor nomination for James Franco and a Best Adapted Screenplay nomination for director Danny Boyle. Boyle, who won an Oscar for his direction of Slumdog Millionaire, recently sat down with RELEVANT to discuss the story of 127 Hours, the optimism behind his films and how the kids from Slumdog are doing.

What led you to the story of Aron Ralston?

It started with the real story. I was in London, and I remember hearing the first reports of [Aron Ralston] being pulled out of the canyon. It was just extraordinary. I remember waiting, and after a couple of weeks he did a press conference in the hospital. I remember waiting to keep following the story, to get that press conference. And then I read his book in 2006, and I approached him. I described what you’ve seen, in first person, but he wanted to make it as a documentary then, as a drama documentary, with him being interviewed in sections, and sections of the piece being dramatized, much like Touching the Void, which is a wonderful example of that drama. I said, “I don’t think that will work. I don’t think you’ll be able to tolerate what you have to do without actually living it.” That was always my thing. So we parted company, and then Slumdog was a very big success, and I think that helped him understand the values I would bring to it as a filmmaker.

I think he changed as a person. He had met this person, Jessica, his wife, and I think she had completed his journey properly. I think only then did he really finish the journey that began in that canyon. It was delayed, postponed, by the media stardom. He became a big media personality. I recognized that. It postpones the aftermath of how you deal with. And I think that she completed him. He was amazing because he gave us full access to the messages, to his family, photos, friends, and he gave us the freedom to make the film the way we wanted to make it. James and I promised him that we would literally hand the film back to him at the end. We said it’s your story, and in a year’s time, James Franco will be doing—I don’t know—by all accounts Alien prequels, and I will be doing the Olympic games. But Aaron will still be living that story, and he will be picking the moment where he tells his son. He’s got that. He will always be inside that story. You can only borrow it, respect it, and give it back. And that’s just what we wanted to do.

Like most of your films, there’s a lot of hope in 127 Hours. What inspires you to make such optimistic films? Do you do it purposefully?

Absolutely, I’m an optimist. I believe in the human spirits very deeply. The idea of this film that he has to swim back to people, what connects us all is more powerful than what separates us, is very profound to me. I believe it, absolutely. The process of the film is that you challenge that, your belief, to see if it will stand up. It makes a great dynamic because you create incredible odds for a character, in a fiction or in this case a real story. One of things I loved about this story was that it was perceived in the media as a superhero story—that he was kind of superhuman in a way. And people said, “I couldn’t do that.” For me, it was never that story. He was like that before going in there: 27, supremely fit, ran ultra marathons, climbed 14,000 ft. peaks in Colorado solo (doesn’t need anybody), turned his back on a job at Intel engineering because he was bored, met these girls, took them on this reckless diving trip.

He’s got everything going for him, and then nature stops him with a grain of sand. And the journey he has to go on then is to realize that he has undervalued, underappreciated, and hurt the people who love and support him in different ways—that he hasn’t respected them. It’s a very simple journey, what John Donne said, “No man is an island.” And it’s so true. When you’re 27 you don’t think that’s true. He has to achieve grace through recognizing that he needs to swim back to people. And somehow these groups we live in, which drive us mad sometimes, are our sustenance. The will to survive is not just an individual thing that acts in isolation. It’s actually something we all share. We would all cut that arm off. We might not do it as well as he did it, and if you didn’t have a knife, you would chew it off. It’s incredible power, and I think that it is life-affirming, and so I was really drawn to the story. And I do like that spirit in all the films, and it’s there even in the bleakest films. There’s stuff in there which I really believe in.

How are the child actors from Slumdog doing?

Christian Colson, the producer, was in India last weekend. I couldn’t go because I was here. They’re good. We’ve made a lot of progress with one of them. One of the boys has moved out of the slums into a good flat with his mom. His father died, sadly, of TB, but he’s been ill for a long time. They’re both at school—that was a big thing we did, get them in school. They don’t attend as much as we would like, though. The last time I was there we had a huge talk with them, in which we had to threaten to withdraw all the money unless they attended school more, and their attendances went up. But what happens is, their parents, particularly the parent of the daughter, have them going around to all the supermarkets making personal appearances and all that kind of stuff for money. So, it’s complex. She has still not moved out of the slum even though we have property for her, which she will inherit when she is 18 or of an age in which she can handle that increasing fortune. You can only do so much, unless you could take ownership of them. Then you could make them go to school every day. But of course we’re not their parents, so you have to negotiate. Her father is especially a difficult man. He tried to sell her to a guy who was, in fact, an undercover reporter from a British newspaper. He tried to sell her for 200,000 pounds. What do you do with a guy like that?

We’re just trying to educate them so that they can make their own decisions, because you can’t choose your parents. You get good things from them. You get bad things from them. We want her to have the independence to go, “No, I don’t want to do that. I want to do this with my life.” I could present a very rosy picture to you, but it’s a complex picture with some good things in it but with some things that are disappointments. But the money is all in place for their long-term.

We’re very proud of another section of the work we’re doing which is with a charity called Plant India, which educates—in a less comprehensive way, but in a much broader way—a lot of the kids in the slums, in Bombay. It teaches them simple things like how to be a car mechanic and how to be a hairdresser, like an apprenticeship. That work is ongoing. We’re just about to renew that for another five years. We’ve funded five years of that work. It’s a massive issue, and it—the money—disappears very quickly. The other problem is a moral one, and not the obvious moral one. The moral problem is that India is one of the great economies of the world now, or it’s gonna be very, very soon. And yet the West is pouring money into charities there. India is trying to put guys on the moon, and they won’t even build toilets for their people. And you think, should we still be pouring money in or should we stop that money now and say, “Look Indian government, it’s not just about having a prosperous middle class, 300,000,000 middle class people? What about all these 700,000,000 poor people that you’re also in charge of? Where’s your obligation there?” It’s very complex. It’s an amazing place, but there’s never a dull, easy day.

What the Oscar Noms Should Have Been