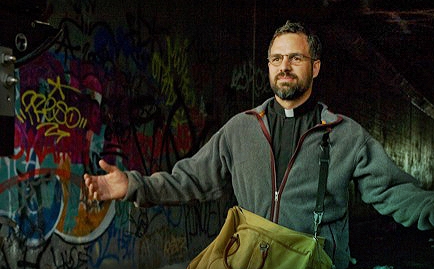 Mark Ruffalo has long been one of Hollywood’s most dependable stars. He’s been in everything from critically acclaimed indie dramas (You Can Count on Me, Eternal Sunshine of the Spotless Mind) to wide-reaching romantic comedies (Rumor Has It, 13 Going on 30). But for the first time, he’s stepped behind the camera as director of the new film, Sympathy for Delicious (out in limited release today). Sympathy is a powerful drama about the life of a paralyzed DJ, played by one of Ruffalo’s closest real-life friends, Christopher Thornton. The film tackles faith, healing, belief and redemption. We spoke to Ruffalo about the new film, why faith rarely gets talked about in Hollywood and how he keeps his true self as an actor.

With all of the scripts you see, why Sympathy for Delicious?

Honestly, it didn’t really come to me the way a normal script comes to me. It was kind of borne out of my 20-year friendship with Christopher Thornton who is the lead in the movie. We started acting school together [and it was] about 16 years ago he had a climbing accident and he broke his spine. He realized that at that point, to continue a fruitful acting career, he would probably have to start writing things for a guy in a chair because he was painfully aware that most of the great parts for guys in wheelchairs went to the guy who walked to the limousine at the end of the day. So about 10 years ago, he handed me a script and after being close to him through his own journey of being recently paralyzed, I felt that it was a story I could tell. I [grew up with] three different faiths in my home—I had Catholicism, my grandmother was a evangelical and the rest of my family and my father [were] Baha’i. So I really understood faith; I understood the faith healings of the boy, I understood the struggle of someone living in a chair. I lived with and fed the homeless when I was a young actor living in downtown LA.

The character you play is a priest. How did you prepare for a role like that?

A lot of times I’ll try and find somebody close to or really kind of living the character that I’m playing, just to add those little nuances that make it feel honest. We were talking to priests along the way just to see how they would react to such a fantastical thing as what happens in the movie. And then I went and found a Jesuit priest who had a homeless calling outreach program in Hollywood and he’d been working with the homeless for years. I just spent a lot of time with him, went down to Skid Row with him, just to try and make it as genuine as possible. I asked [Chris Thornton] to spend the night there one night so he could sense what it was like to live in his car in that area. We really wanted to honor people by bringing as much of a sense of authenticity to it as possible.

The film has much evidence of a faith struggle, but it’s pretty gritty and dark. Why does Hollywood not have as many films that have the weight of faith alongside dark themes?

I think they’re afraid. I think part of what took so long to get this movie made was what we’ve been taught or what we’ve seen in movies that deal with faith are usually ones that are very light or only deal with one aspect of it. And I think to have a really honest conversation about faith today is taboo in a way. You want to clear a room quickly, start talking about God. For better or for worse, it’s a taboo conversation. There’s a lot of hang-ups and people I think have a lot of negative connotations that are attached to it. And so I think we’re in a market-driven culture. Everything is market-driven in the culture we live in today, and I think they’re afraid there is no market in these kind of stories.

I think Hollywood is driven by markets and I think Hollywood is afraid to make a movie that no one is going to go see. That is based in some regard on assumptions but also on a certain kind of reality. It’s a little bit of a sad state of affairs for storytelling because great stories are stories that are based in truth. There are certain coarse realities about faith—real, street-level faith. We don’t want to look at it because it’s ugly to us, but it’s where there is a lot of grace. If we are who we say we are, then we have to engage in those things that frighten us or repulse us. Otherwise, we’re part of the problem. And we do think we sanitized our storytelling in such a way that the stories aren’t being told in the way they should and could be to really touch people—and teach people. That’s what storytelling is for, really, in one of its aspects. Sure, entertainment is wonderful for us, and we need that. But more so, at this moment in time, we need stories that enlighten us and teach us about ourselves and show us compassion about others. And those kinds of stories I think do that, essentially.

This interview is just part of a longer conversation with Mark Ruffalo. To hear the whole thing, check out the episode page.

Is Japan Blaming Sin for Its Crisis?