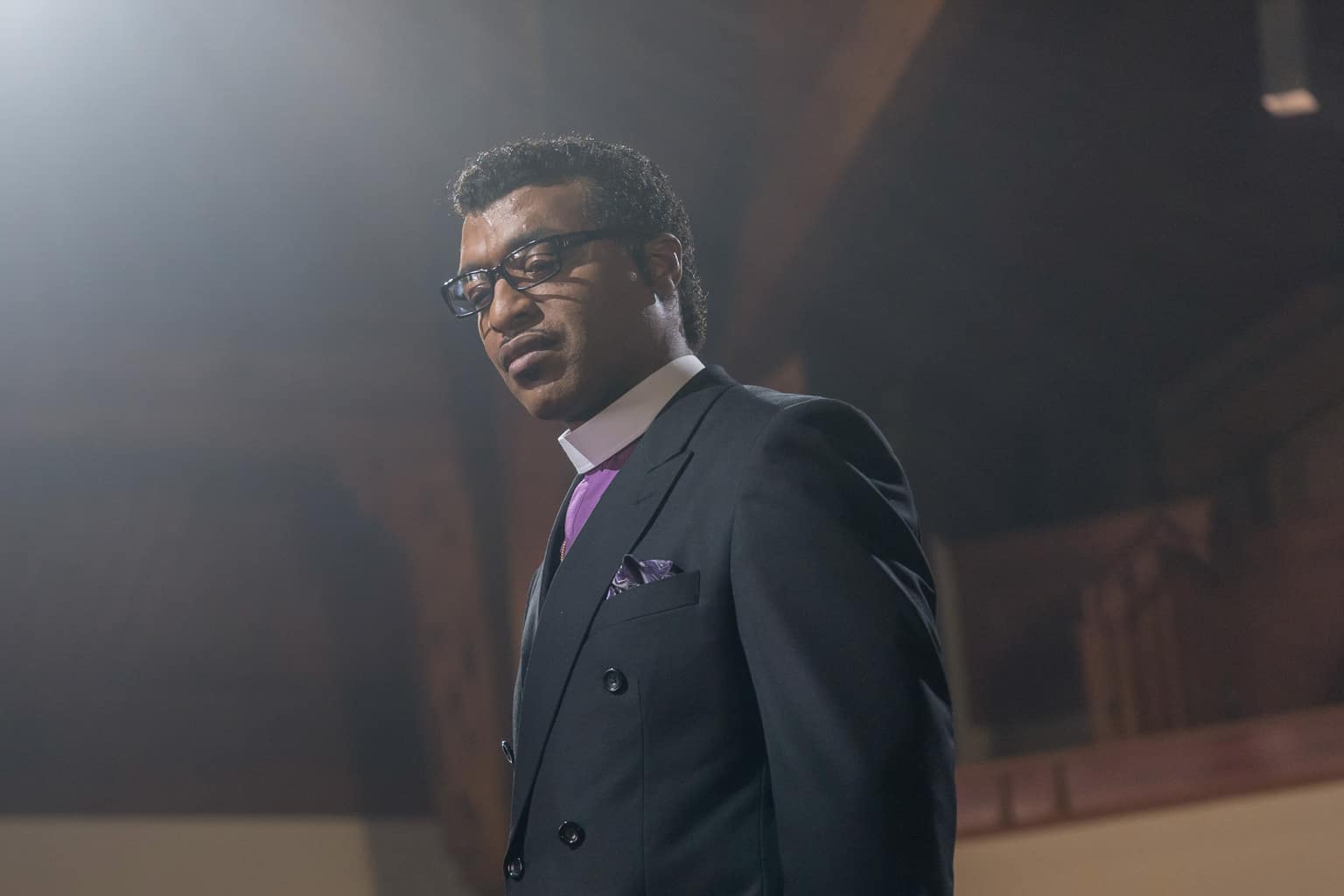 It’s easy to forget the immediacy of the Christian message, because oftentimes its extreme prescience is buried under layers of corny, saccharine, “positive, encouraging, K-LOVE” messaging. There’s nothing wrong with communicating the joy and hope of the gospel—it’s vital—but there’s a tendency, perhaps, to lose sight of Christianity’s intense consequence amid all the swaying, raised-hand praise sessions. Come Sunday, from Netflix and This American Life, doesn’t forget those eternal stakes, and that gives the movie some vital undertones, even if its positioning is a bit unfair.

Come Sunday is based on the real-life story of bishop Carlton Pearson, a megachurch pastor in Oklahoma who, in 1998 claimed publicly to his congregation that he heard the voice of God say hell does not exist. The fallout from this proclamation was devastating to Pearson’s personal and spiritual life, and today, he is considered a heretic by many in the mainstream church. The movie follows his journey from Pentecostal-Movement linchpin to Christian outcast.

And as a movie, it’s about as strong an offering as you could want in the faith-based landscape. Chiwetel Ejiofor is physical and magnetic as Pearson, but he’s supported by one of the most overqualified supporting casts in a Netflix movie to date. Jason Segel (How I Met Your Mother, Forgetting Sarah Marshall), Lakeith Stanfield (Atlanta, Get Out), Danny Glover and Martin Sheen all play pivotal roles (Sheen appears as Oral Roberts), but better than all of them might be Condola Rashad as Gina Pearson, Carlton’s wife. She’s fierce. The movie explores the web of all these relationships with, if not dexterity, dedication. There’s intention here.

Come Sunday spends most of its runtime exploring the relational fallout of Pearson’s message, and it’s in these moments when the movie is at its best. Pearson argues with his church partners after not consulting them about his change in belief. He battles with his wife over their newfound identity within the church. A congregant stops Gina Pearson in the supermarket to pray the demons out of her. Amid all this, people continue to walk out of Pearson’s church.

It’s a smart and nuanced look at how a Christian community functions, and for faithful viewers, it’s an urgent reminder of how those communities are defined. Church culture is full of strategies to encourage unity, togetherness, belonging and consistency. Pearson’s denial of hell disrupts that consistency, and when someone subverts the commonality that people assume is present when they worship together, it appears as a seismic and destructive event. That’s true-to-life.

Come Sunday’s sharpest critique of the church steps halfway into the light during these scenes. It seems to accuse the church of drawing a line between doctrinal commonality and acceptance. When the commonality isn’t there, the acceptance isn’t there, and that’s a sticky concept these days. Churches are still struggling to articulate the difference between tolerance and acceptance, and Come Sunday picks at that scab in persistent fashion.

It would’ve been a bit too open-handed for Come Sunday to show a full-on theological debate about hell, but in the absence of that conversation, it’s important to show both sides in full. While we see plenty of nuance with Pearson as a man in crisis, we see little nuance for his opponents, who come off mostly as old-school narrow-minded Christians. There’s some casual homophobia and elitism, and lots of patronizing. It isn’t really clear if Come Sunday is trying to take a side, but it’s clear it doesn’t find much inclusion in the traditional gospel message, which is disappointing to say the least. It’s the movie’s biggest spot of ignorance regarding its (admittedly complex) subject.

On the other hand, Come Sunday does underscore the intensity behind the gospel message: If Jesus really was who He said He was, then our relationship with Him has eternal, weighty consequences. That heaven-and-hell context affects the way we relate to our family, friends, coworkers, leaders, students, neighbors, essentially anyone we encounter. Sometimes this manifests as the golden, warm “there’s something different about you” kind of evangelism we’ve stereotyped to death, but other times, it manifests as pain and burden. Come Sunday leans into that second dynamic.

This is what a crisis of faith looks like—messy, angry, wracked, life-altering. Pearson’s struggle is rooted in the conviction that his new beliefs affect the destinies of everyone around him. Of course, the same goes for his adversaries. That severity runs throughout Come Sunday, and it’s a heady reminder to the viewer that wherever you rest in regards to Pearson, the church, or Jesus, your decision matters.

This movie communicates spiritual urgency through honesty, not preachiness, and it’s not the smallest revelation to find this approach is much, much more effective.