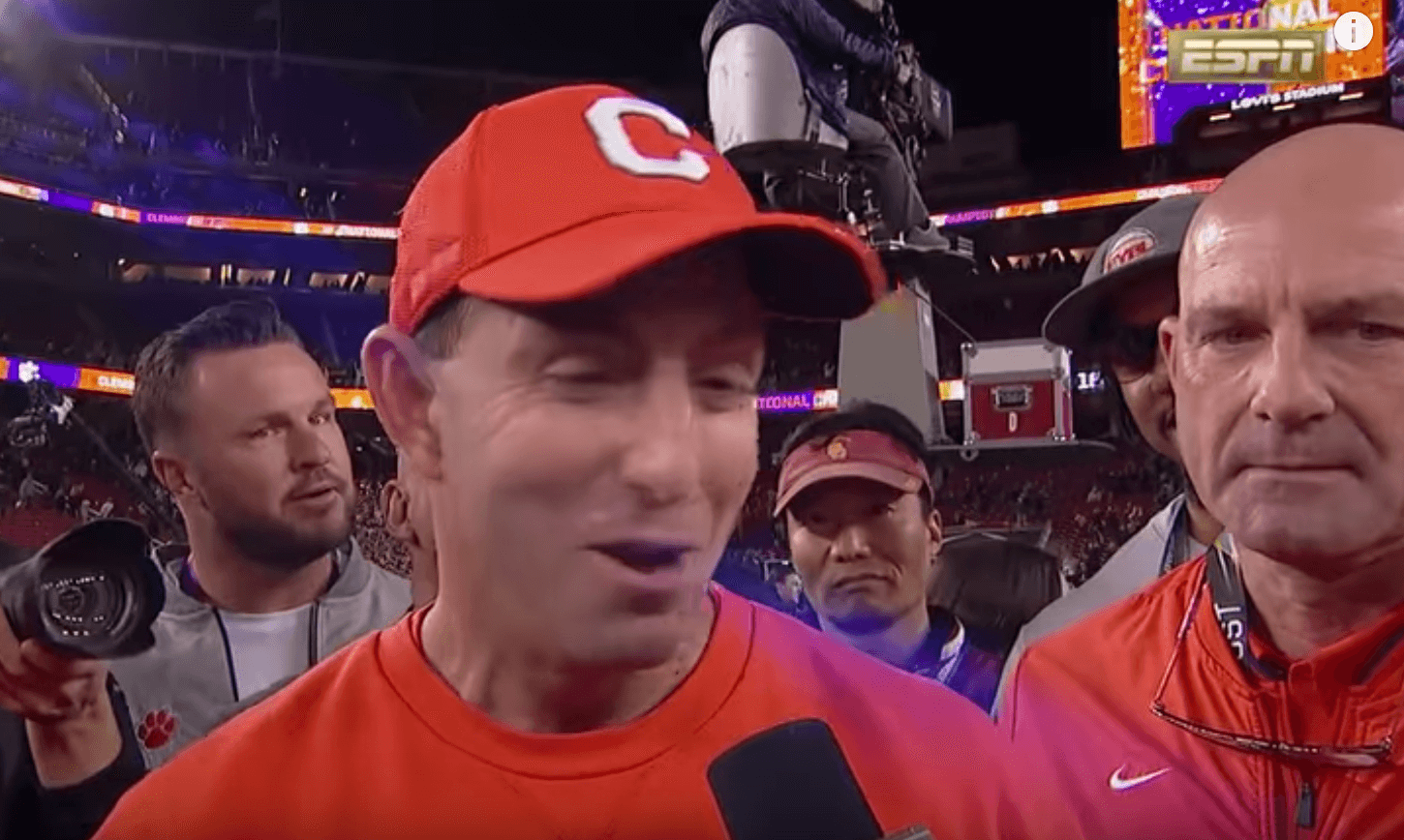 After the game, as confetti fell around him, Swinney was asked to describe the joy he felt in that moment, and while he talked about the win, he first talked about something else:

“For me, joy comes from focusing on Jesus, others and yourself. There are so many coaches that are so deserving of a moment like this. To get to do it once, and now to get to do it again, it’s a blessing. It’s simply the grace of the good Lord to allow us to experience something like this,” he told ESPN’s Tom Rinaldi. “When you get a young group of people who believe, who sacrifice, who are committed to a singleness of purpose, great things can happen. You can’t write a Hollywood script like this. Only God can do this.”

Swinney is open about his faith. In a press conference from earlier in the week, he told reporters more about the foundation of his values and beliefs. When asked to explain his faith, he said: “That’s the easiest question I’ve had all day.”

“To me, that’s the priorities of my life. I made a decision when I was 16 to have a relationship with Christ, and that was a game-changer for me. That’s become the foundation of my life. It’s hard to survive in this world if you don’t have a spiritual foundation and something that will give you peace, because life is hard. We’re all going to experience setbacks. It’s a difficult world. My relationship with Christ has given me hope and peace.

“To me, if there’s really hope in the future, there’s power in the present to deal with whatever it is in your life. That’s what my relationship with Christ did for me. It gave me the ability to hope beyond my circumstances. It’s the greatest accomplishment I’ve had at this point to see my three sons know Christ. People who know me know I ain’t perfect, but I try to live in a way that will hopefully be pleasing to my maker. He’s going to hold me accountable to how I took advantage of the blessings that he gave me.”

Dang. What a guy. What a champion. Go Clemson. Can we say that? Go Clemson.

‘Doctor Strange’ Director Scott Derrickson: ‘We Christians Are Not the Solution. We Are the Core Problem.’