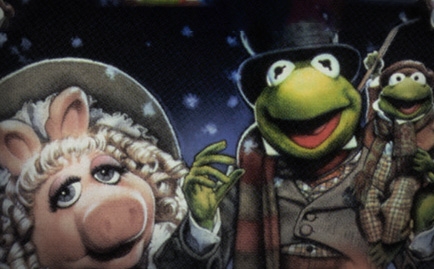 Part of the joy of Christmastime is that you have permission to watch the same movies over and over and listen to the same carols on repeat. There’s a certain festivity and nostalgia in the sameness of the season. But even your holiday favorites lose a little of their tinsel sparkle after the third or fourth viewing. … Have you watched Home Alone so many times you know the total of Kevin’s pizza delivery order ($11.80)? Does your family still try to laugh like they’ve never heard the dad mispronounce “fragile” on A Christmas Story (fraah-gee-lay)? Have you finally realized How the Grinch Stole Christmas and all the claymation classics are really only 40 minutes long?

Here are our top 10 suggestions for underappreciated or unconventional Christmas films you might not have seen (or simply forgot about because cable TV doesn’t air them on repeat for 24 hours). With a little creativity and Netflix searching, you just might uncover a new/old Christmas classic.

The Shop Around the Corner

This is Jimmy Stewart’s lesser-known and not-so-tear-jerking holiday film. The 1940 romantic comedy also served as the loose inspiration for Tom Hanks and Meg Ryan’s unlikely love story in You’ve Got Mail. This time, the two leads aren’t falling in love via email, but as anonymous pen pals. Of course, they actually see each other every day at the gift shop where they work and loathe each other’s existence. Perhaps only a little Christmas retail magic can bring them together …

Most films that star everyone in Hollywood settle for a flimsy plot. But this time the full cast is a solid foundation for discussions of some very serious topics—racism, parenting, choosing a career, homosexuality, unhappy relationships, terminal illness. Uncomfortable? Sometimes. But not unlike many family gatherings at Christmas. Ultimately, this is a story of a loving family staying strong when its individual members may not.

Remember The Preacher’s Wife, the ’90s film where Denzel Washington is an angel on assignment and Whitney Houston is a choir director with a strange attraction to the angel (oh, and she’s also married to a minister trying to rebuild his church)? It was actually based on this less weird and spiritually moving film from 1947, starring Cary Grant and Loretta Young. Though it lacks an amazing gospel choir, Grant’s Christmas angel is more believable in this warm-and-fuzzy classic.

This “modern” (read: “’80s-tastic”) retelling of Charles Dickens’ A Christmas Carol stars Bill Murray as Frank Cross, the Ebenezer Scrooge of TV executives. Hilarious hijinks ensue when he is visited by the ghosts of Christmas past, present and future to revive his holiday spirit. It’s still slightly spooky and redemptive, but you also get Carol Kane as a pip-squeaky Ghost of Christmas Present intent on literally slapping Cross in the face.

Don’t you just hate it when a hostage situation involving terrorists sabotages your Christmas plans with your family? … OK, so it’s not exactly the kind of holiday film that makes you want to gather the kids close and drink some eggnog. But the ’80s action film starring Bruce Willis could be an unconventional addition to your viewing list this season. And any movie with an evil Alan Rickman is worth your time.

When it comes to Christmas musicals, it doesn’t get any better than this. But somehow, many forget about watching White Christmas, and settle for singing the song (introduced in Holiday Inn and later popularized in this film). The back story? Bing Crosby and Danny Kaye team up with Rosemary Clooney and Vera-Ellen as a swinging, tap-dancing, harmonizing quartet trying to save a friend’s struggling lodge during a not-so-snowy holiday season. The answer, of course, is to dance and sing.

You might have forgotten this is a Christmas movie because a would-be man with a big heart and scissor hands makes for a creepy Halloween costume. But the chilly climax of this quirky Tim Burton story actually revolves around a Christmas party. Plus, what’s more festive than Johnny Depp making crazy life-sized ice sculptures in your front yard?

The gang is back full-force with The Muppets. But why not revisit one of their earlier films this Christmas season? A Christmas Carol becomes that much more endearing when Gonzo narrates as Charles Dickens, and Kermit and Miss Piggy play the unfortunate Cratchits. And only the Muppets could get Michael Caine to be a Mr. Humbug so cranky, “even the vegetables don’t like him.”

Meet Me in St. Louis

This old film is about a family moving away from home. There’s also a bit about the World’s Fair and you’ll get a dose of romance. But really, all you need to know is this lively musical eventually makes its way to a
scene where Judy Garland looks tearfully out the window over the snow glistening in her backyard and sings “Have Yourself a Merry Little Christmas” to her baby sister. Break out the hot chocolate and the tissue box.

The Year Without a Santa Claus

This TV special is the overlooked claymation cousin of Rudolph the Red-Nosed Reindeer and Santa Claus Is Coming to Town. When Santa Claus comes down with a cold, he decides to call in a sick day on his Christmas duties—which you can probably already guess is a terrible idea for everyone involved. If you love Heat Miser, Snow Miser and the song “Blue Christmas,” this one is worth browsing for.

HONORABLE MENTION: Little Women, All I Want for Christmas, Gremlins, Batman Returns, Serendipity, To Grandmother’s House We Go, Bridget Jones’s Diary, The Holiday, While You Were Sleeping, Babes in Toyland, Bells of St. Mary’s

What are you watching this Christmas season? Is your favorite forgotten classic not listed here?

TV Ownership Drops For the First Time in Nielsen History

Don’t Own a Dog in Turkmenistan