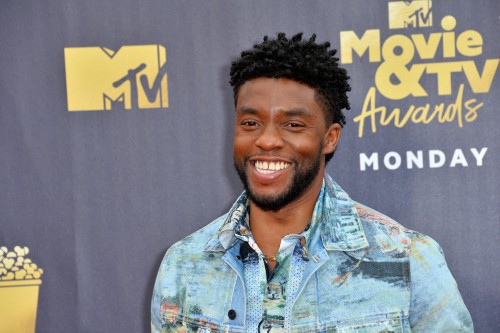 Chadwick Boseman inevitably won the award for best hero at the 2018 MTV Movie & TV Awards for his starring role as King T’Challa in Black Panther, but he had other plans for the trophy.

During his acceptance speech, Boseman acknowledged James Shaw Jr. for his courage and bravery during the Waffle House shooting in Antioch, Tennessee back in April.

Shaw Jr. was hailed as a hero after he wrestled the gun away from the shooter, saving countless lives during a rampage that left at least four dead and multiple others injured.

“Receiving an award for playing a superhero is amazing, but it’s even greater to acknowledge the heroes we have in real life,” Boseman said during his speech. After inviting Shaw to join him on stage, he presented him with the trophy and said, “This is gonna live at your house.”

Boseman also took to Twitter to thank the hero.

??? and more ?… THANK YOU #MTVAwards! #BlackPanther fans, you’re incredible. During the show, I was honored to meet @JamesShawJr9. He saved countless lives by tackling a gunman who opened fire on people in Antioch, Tennessee in April. He’s a true hero that walks among us. pic.twitter.com/bIF8vOk3v3

Not all heroes wear capes.

How Jesus Shows Us What It Will Take to Beat Racism