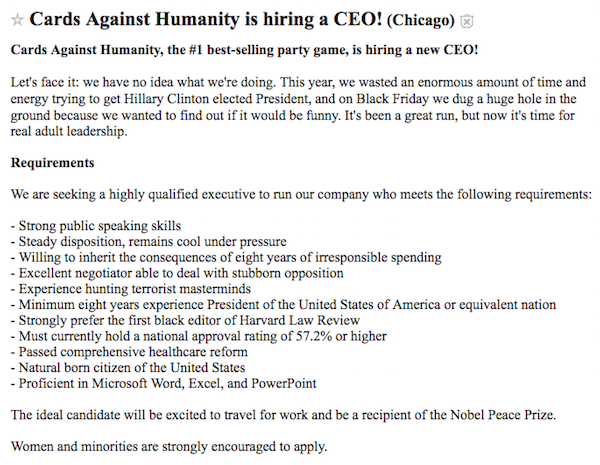 Fear, Anxiety and the Power of Self-Fulfilling Prophecies

If you’ve been scouring the internet the last couple of days in search of a job on Craigslist you may have noticed a seemingly amazing opportunity that was listed by Cards Against Humanity. The snarky party game took to the classifieds website in pursuit of a new CEO, but we can’t help but think their requirements are a little too specific…

In other words, if your name is President Barack Obama the job is yours! While there are probably many other people out there who are proficient in Microsoft Word, Excel and PowerPoint, how many have a minimum eight years experience being President of the United States of America or equivalent nation?

The not-so-politically correct card game was obviously making a political statement, but even still we wouldn’t blame Obama if he wanted to take the offer. He must have a little bit of free time on his hands now, right? Assuming he didn’t take that job Spotify offered him as “President of Playlists.”

Obama is in popular demand these days and with eight years of presidency headlining his resume, we can’t really blame him.