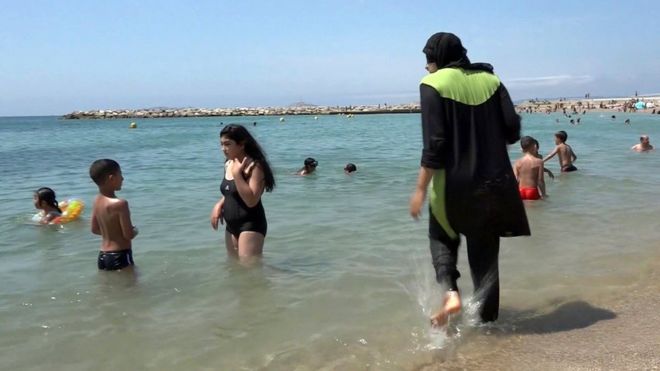 Muslim women who visit the beach in Cannes, France are no longer allowed to wear burkinis—full body swimsuits, according to reports.

The mayor of Cannes, David Lisnard, banned the burkinis at the end of July, calling them a “symbol of Islamic extremism” and fearing that they make spark public disorder.

Anyone wearing the burkini will be asked to either change into something else to swim or leave the beach. The penalty for not doing either one is 38 Euros, or about $42.

Set up as a reaction to the terrorism happening around France by Islamists, the law reads:

Access to beaches and for swimming is banned to any person wearing improper clothes that are not respectful of good morals and secularism. …
Beachwear which ostentatiously displays religious affiliation, when France and places of worship are currently the target of terrorist attacks, is liable to create risks of disrupting public order.

In 2011, France was the first European country to ban the burka with fines up to $200. However, people are questioning the legality of the burkini ban because it wouldn’t cover the face.

“I simply forbid a uniform that is the symbol of Islamic extremism,” Lisnard told media. “We live in a common public space, there are rules to follow.”

According to BBC, the Collective Against Islamophobia in France will challenge the decision for being illegal and discriminatory.

The Problem with Voting for the ‘Most Christian’ Candidate