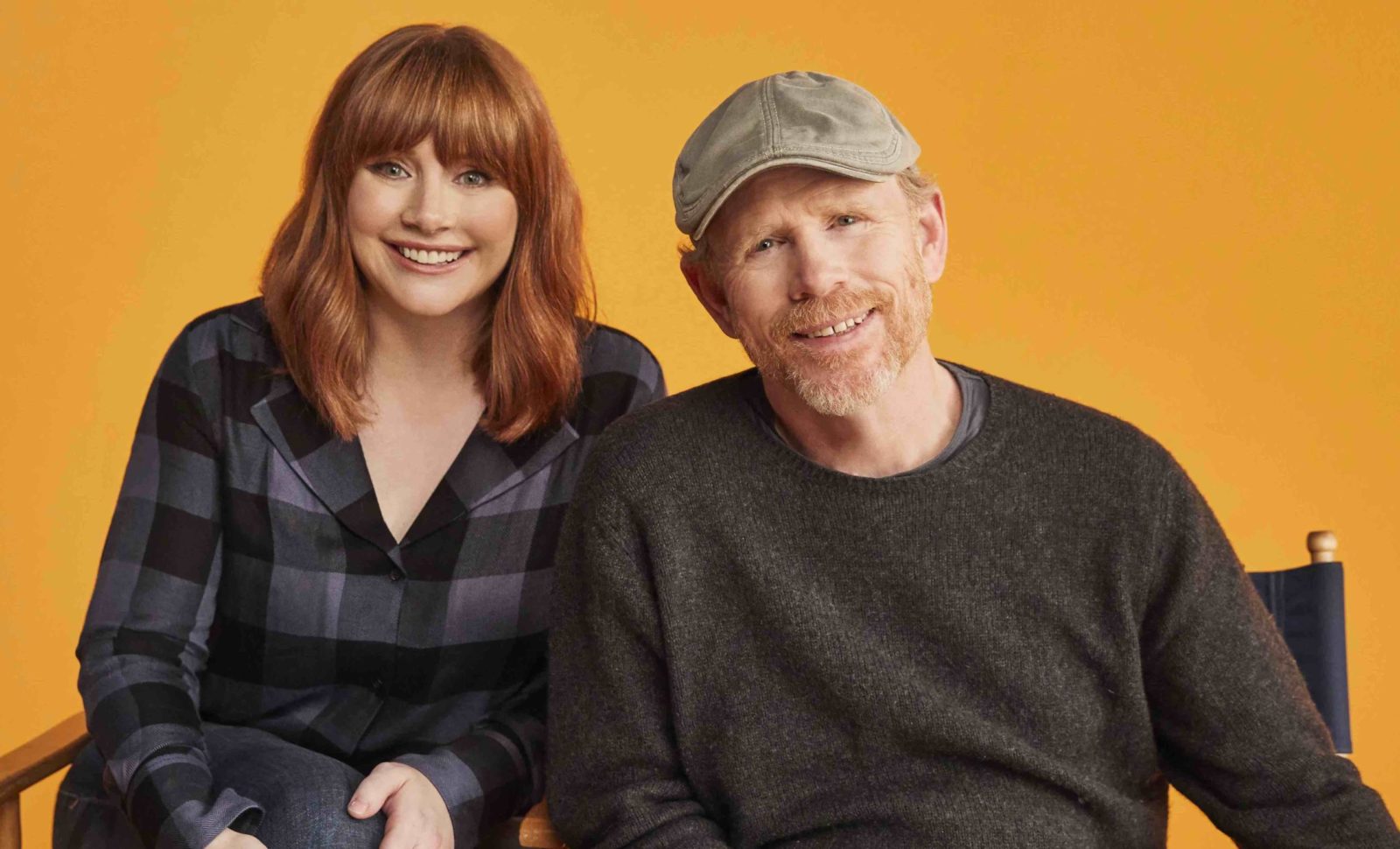 My conversation with Bryce Dallas Howard happened to take place during Elon Musk’s first attempt at launching Space X. As you might recall, the launch was canceled due to some inclement weather in Florida. She said she was glad they’d called it off, confiding that she’d had a “bad feeling” about it anyway. When I told her that a lot of movies start this way, she laughed. “Oh yeah,” she laughed. “I was a PA on one of them.”

She’s been in the film industry almost her entire life, the daughter of one of this era’s most iconic actors and directors. And while she’s certainly made her own mark as an actor in the Jurassic World franchise and projects like The Help and Black Mirror, she’s quickly becoming even better known as a gifted filmmaker. She’s directed a few short films, a standout episode of The Mandalorian and now her first documentary feature Dads, which follows a combination of famous and non-famous fathers, exploring the evolving understanding of fatherhood.

She sat down with us at RELEVANT to talk about the project, her relationship with her own dad and what she hopes this does for viewers.

Why Dads? What is it about fathers that made you want to tackle this kind of documentary?

They wanted to make a documentary around modern fathering. I had been doing a bunch of short documentary films and stuff, and I had worked with this producer, Justin Wilkes, who became the president of Imagine Documentaries. And he said, “Would you want to go to this meeting with me and see if this is something that you think is viable?” And I was like, “I’m just going to go and hear what they want to do. I’m super curious.” But I didn’t have any ideas or anything. Their directive was like, “We want to do something that can really help you sort of eliminate the limiting beliefs around men being caregivers and the impact on society.” And I was like, “OK, so it’s a comedy.”

And I was like, “Here’s what I think. I think we should get standup comedians who are dads. Let’s talk to comedians who have thought about this, and view their lives through the lens of comedy.” And they can kind of be a Greek chorus, and then we should dive into the daddy blogger community because they’re going to have a ton of footage of their kids that we can build a story on top of and then we can send a crew, and just do it very quickly. I was also directing on season one of The Mandalorian at that time.

And so it happened all very organically. A couple of people in my life were sort of scratching their heads and being like, “Wait, what? What are you doing?” Especially because it was during Mandalorian. They were like, “OK, you’re shooting this thing on the weekends. Do not fumble bumble Mandalorian, please. Do not.” And I’m like, “They’re kind of connected. The Mandalorian is the story of a father and a son. They’re both stories about dads. This is thematic terrain that I’m navigating at this point in life, for whatever reason.”

So you could have looped in some Baby Yoda footage into the documentary. Double dip.

[Laughing] Oh gosh. If only.

Did you go into making this doc with any sort of any preconceived notions about fatherhood, either your own relationship with your dad or just your conceptions of fatherhood in general, that got challenged?

I went in just being like, “Yeah, why are we not seeing men depicted in a — not even a positive light — in an unrealistic light?” Men are depicted as these bumbling guys who are providers at best. That’s the majority of fatherly depictions in the media. So I went into the project hoping to disrupt that image, assuming it would be very easy to do because there are so many great dads. The assumption was correct.

We were overwhelmed with great father stories. It was difficult to narrow it down, honestly. The thing that came up again, and again, and again for me were blind spots. Things that never would have occurred to me — that I’d never thought about, that were massive. Such as, for example, men do not have a right of passage for becoming a father. Women have a baby shower. That’s a big deal. That’s a thing. You don’t want to miss the baby shower of yourself because you need that community. You need that acknowledgment of this huge transition. You need people to rally around you and envision for you what is possible in this next chapter, because you’re never going back.

Fathers have nothing. Zero. Zilch. What is that communicating to fathers?

Seems like it’s tied to a broader dearth of healthy concepts of masculinity. Things like community and vulnerability are still sort of dicey for a lot of men.

Yeah, we’re limited by what we see. That’s what’s possible and nothing more. And so when we see something that is new and yet relatable, that expands what’s possible for human beings. And I think that we were already seeing men go through a period of transition where it’s being more embraced to be vulnerable. It’s really embraced to be connected to all sides of yourself. Masculinity doesn’t have to be this very limiting idea that might be accurate for a very small percentage of the population and only a small percentage of the population can actually identify with. 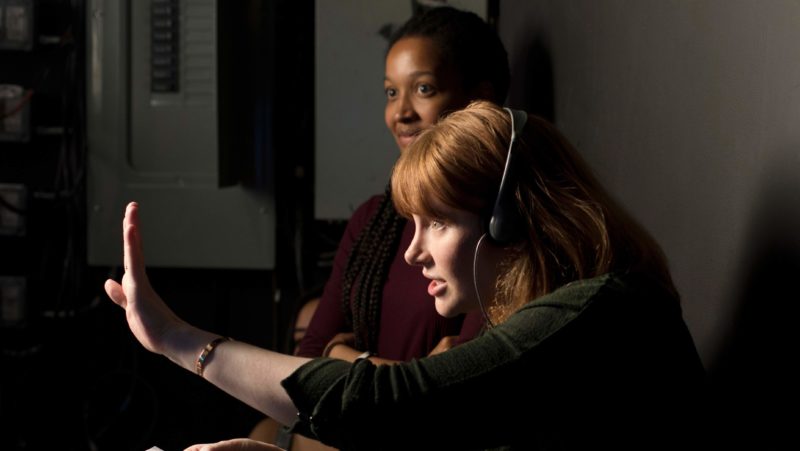 They say you can never really know your parents. Did making this get you to confront your own relationship with your dad?

Well, of course. But what I would say is that when you have a parent who has been in the public eye since he was a little kid, there’s a lot more that I’m privy to as their child than most of my peers with their parents. Because the clippings of the newspapers were saved and we’ve got the episodes and they’re memorable stories and people share things with me.

So the byproduct of my dad living a public life and then also my dad and mom being together since they were 16 — I do feel like I definitely would like to think that I know them. My mom in some ways is more mysterious than my dad because there’s not quite as much focus on her. But it’s always a revelation. It’s also when you yourself become a parent. I started to understand my parents.

Did having that understanding change your own parenting style?

Mostly what I’ve observed is that people are either trying to emulate what their parents did or they’re trying to do the opposite of what their parents did. And in my case, I feel really fortunate because I’m trying to really emulate what my parents did. My childhood is basically the same as what my experience has been like as an adult on movie sets. So now my kids are living the childhood that I got to live and I’m living the adult life that my parents were living at the time. That’s something that I’m really, really, really grateful for.

What would you say to strugglings dads? After your time working in this culture, do you have advice for fathers who feel alone in what they’re going through?

That’s a really great question. Let me take a sip of my milk and think about this.

If you share your experience with others and you’re open in that way, then it makes it possible, gives others permission and it makes it then possible for them to be that way. My dad said this the other day. He said all of us are aware of the fact that all of our industries are going to go through or are going to be impacted by what we’re all going through right now. Stuff’s going to change. There’s always a little bit of anxiety around that. And he was like, “I do believe that stories will always exist because stories are how we learn.” And I think seeing stories — that’s how we learn to be a good partner, a good parent, a hard worker.”

Dads is available on Apple Plus Friday, June 19.

Ian Holm, Star of ‘Lord of the Rings’ and ‘Chariots of Fire,’ Has Passed Away