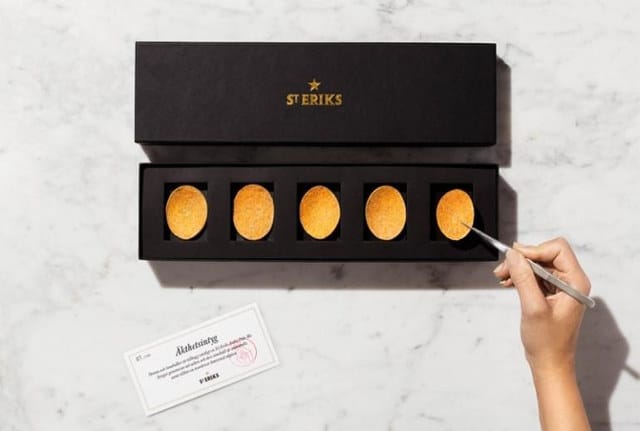 Compared to the highs and lows of the American financial system Sweden’s economy has been seemingly and laughably steady. The cost of living over there is higher, but so is the average income.

For example, the average wage is generally around $18/hr, the average price for an inexpensive meal is $10.50 and even a simple cup of coffee is almost $4. So it should come as no surprise that a country so notoriously affluent is busting out some of the world’s most expensive potato chips. And no, we’re not joking.

A brewery in Stockholm called S:t Eriks Bryggeri recently introduced their luxury 5 pack of potato chips retailing at $56. The chips are packaged in a limited edition box and feature high-end ingredients such as Matsutake and truffled seaweed.

If you have a hard time spending the extra $1.30 at Chipotle to add chips to your meal, you may be wondering what could possibly justify spending nearly $60 on chips. Well, not only is the brewery donating all of the proceeds to a charitable cause but the chips were hand crafted with some of the most sought after ingredients in the world:

The world’s most expensive chips, prepared using carefully selected ingredients. Among the ingredients are Matsutake, one of the world’s most sought-after species of fungi, and a special truffle seaweed from the Faroe Islands that can only be found in cold tides. … All Chips that have been developed have been manufactured by hand. It has taken flair, taste security and time for each chip to have a perfect balance between the various raw materials. The taste is very Scandinavian because we have only been using Nordic ingredients, for example, Swedish mushroom and seaweed from the Faroe Islands. Potatoes and onions feels most again, but what stands out is the quality.

Kids of the ’90s Rejoice, ‘Space Jam’ Is Returning to Theaters