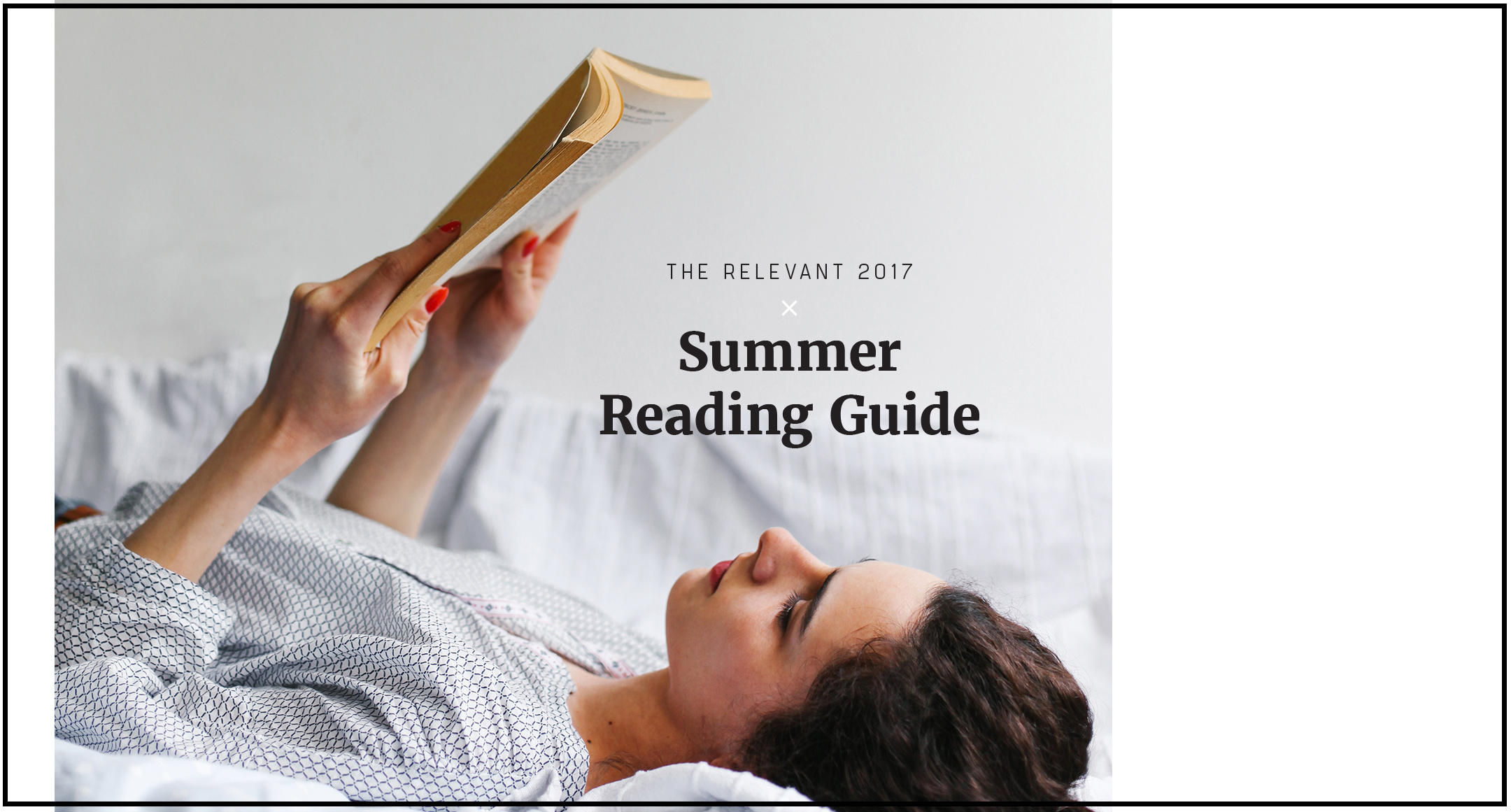 Our fast-paced, technology-driven culture has changed the nature of reading. We get our news from 140-character summaries. We form ideologies based on Facebook. Taking the time to sit down and read an actual book is a lost art.

But it’s an art worth reviving, even if it means retraining our attention spans. Books can transport you to different worlds and give you new perspective of your own. They can teach you more about God and what it looks like to live out your faith.

Don’t believe us? Check out these titles. The following selections are perfect for the next time you head to the beach or sit down for a lazy summer afternoon read. You’ll thank us later.

Saeed and Nadia fall in love in an unnamed Middle Eastern country, a nation which soon thereafter erupts in civil war. As the war closes in around them, they find a way out, following in the footsteps of many refugees headed to Europe. Saeed and Nadia follow the route from their home country to the Greek island of Mykonos, to London, to the United States. It is a harrowing journey, no doubt, with perils looming every step of the way, and yet in the middle of the almost unbearable life of a migrant, Hamid gives us moments of extraordinary beauty: a Mediterranean breeze that wafts through their hair, the strains of a favorite song downloaded to a phone. Exit West not only gives Western readers a peek into refugee life, it poignantly reminds us that migrant people are human beings, with the sort of hopes and longings that are common to us all.

The Face of Water

A Translator on Beauty and Meaning in the Bible

Sarah Ruden is not a biblical scholar, but a Quaker and expert on ancient languages who has been translating portions of Scripture from Hebrew and Greek. In her translation work, she finds that we are losing a significant amount of the beauty and tone of the original texts once they’re translated. Ruden selects three down passages from the biblical texts and explores how reading these passages in the original languages breathes new and fresh life into her reading of them.

Reflections on the Meaning of Home

Keeping Place is a compelling book that stirs imaginations by giving the language and tools to reflect on how we collaborate with God in the work of healing a broken creation and helping it flourish.

RELEVANT: In Keeping Place, you explore the idea of home and why it matters for Christians. Home can mean different things to different people—can you explain what you mean by it?

JPM: I think of home in three parts: There is a geographical dimension to home, but there is also a social element to home—our connection with one another—and third, the spiritual aspect, our connection to God. You don’t have home without all of these things.

RELEVANT: You talk about our longing for home, which you describe as nostalgia. Why do we have this longing?

JPM: Nostalgia often gets a bad rap, as people long for eras that weren’t so great for some people. But the sort of nostalgia I am most interested in is nostalgia that goes all the way back to the Garden of Eden. There we had all three elements of home. The human spirit is nostalgic for that experience.

How Films Voice Our Deepest Longings

There is a great temptation in our day to simply watch movies or television as amusement—that is, as a distraction we don’t think much about. Film critic Josh Larsen isn’t opposed to enjoying films, but in this new book, he encourages us to reflect carefully on them and consider what they reveal to us about God and our identity as humans created in the image of God. Larsen provides 10 different categories of prayer that scenes in movies can evoke and illustrates these prayers by reflecting on more than 100 films. Movies Are Prayers is a delightful and important book that shows a particular way in which we can encounter God prayerfully in our daily lives. Although Larsen’s focus here is on film, the language of prayer he introduces could easily translate to any other medium. Considering the ways in which watching movies can be a form of prayer stirs the imagination about the possibilities of what it could mean to live a life full of prayer or, in the words of the Apostle Paul, to pray without ceasing.

If you recognize his name, that’s because Colson Whitehead is one of the most significant and versatile writers in the business. In 2002, he won a Pulitzer Prize for his novel, John Henry Days, and he attracted a whole different set of readers with his sports and culture work at Grantland.

But his most lasting work—which is saying something—might have arrived last year with his latest novel, the best-selling and National Book Award-winning The Underground Railroad. Somewhat predictably, the book is about a runaway slave. Except in Whitehead’s fictionalized world, the escape route isn’t just a metaphor.

Under the ground, runs an all real, fully functioning railroad, transporting slaves to the north and to freedom.

It’s an idea that floated around Whitehead’s imagination for years.

“I wanted to honor all the people who had been in slavery, to the dead, to my ancestors,” he said in an interview with Vulture.

For much of his career, Whitehead stayed away from writing about the topic.

In a separate interview, he said, “For years I felt that I wasn’t ready to take on slavery. It’s a huge topic, and I didn’t want to mess it up. Plus, I knew I would have to put Cora and my other characters through horrific events in order to be realistic. I had to know I could get it right. Which is probably why it took me about 16 years to finally write it.”

But don’t think Whitehead’s work is a piece of social commentary on race relations in America.

“I think five years from now, when people read the book, they won’t have [an association with the racial issues of 2014-2016], because our brief conversation about police brutality will be over,” said Whitehead.

It’s not that The Underground Railroad doesn’t speak to current tensions—it’s that the story is timeless.

The Light Is Winning

Why Religion Just Might Bring Us Back to Life

Zach Hoag offers a unique mix of memoir and cultural commentary in The Light Is Winning. By telling the story of his own faith journey, Hoag illuminates the challenges and opportunities that face American Christianity today. He makes the case here that religion is what we need in the 21st century to lead us deeper into the sort of flourishing that God intends for humanity.

A Spiritual Practice of Asking Questions

Building on the Gospel accounts of Jesus’ own curiosity and the questions He asked His disciples and others, Casey Tygrett describes a life of discipleship in which we are always asking questions and learning. Becoming Curious is wonderfully refreshing, especially for those who feel Christianity has too many answers and not enough questions. This book will turn many deep convictions on their heads. Taken seriously, it can transform the way in which we live out faith every day.

What Jesus Really Said About the Poor

Jesus’ words, “The poor you will always have with you” are often taken as a license to not care for neighbors in poverty. In this book, Liz Theoharis helps readers understand the context in which Jesus spoke these words, what He meant by them and what it all means for modern life. Today, Christians may be more attentive to the dynamics of their faith in matters like race and immigration, but conversations about economic class have been less prominent in churches.

Ko’s debut novel tells the story of Deming Guo, the young son of an undocumented Chinese immigrant mother in New York City. One day, his mother Polly goes to work and never comes home, seemingly vanishing. Deming is eventually adopted by two white professors in upstate New York, but the dissonance of this new world in contrast to the Chinese community in which he spent his earliest years is unsettling, and he flounders through delinquency as a young adult. Polly eventually resurfaces, and Ko reveals what happened to her, interweaving her story with that of her son’s.

Set in a dystopian world of the not-too-distant future where biotech firms run amok, Borne is a gripping sci-fi novel. While out scavenging the city, Rachel, the book’s protagonist, finds Borne, a creature that captivates her although she doesn’t even know whether it is a plant or animal. Borne grows and Rachel maintains her fascination, even when it puts her life and well-being in jeopardy. Through this vividly crafted future world, Jeff VanderMeer unveils the tenuousness of our own world and the sort of stability we find as we reach out to know and be known by our fellow creatures.

Why We Never Think Alone

An utterly fascinating and unsettling book, The Knowledge Illusion shows how everything we know is bound together with the knowledge of others. Sloman and Fernbach break down assumptions about science, how we think and how we know anything at all about the world in which we live. Despite the gravity of it, the authors are upbeat. The illusion is that we don’t know as much as we think we do, but this humbling realization is not necessarily a bad thing. Living under this illusion bolsters our confidence and energizes us to discover new ideas and connections.

C. Christopher Smith lives and writes as part of the Englewood Christian Church community on the urban Near Eastside of Indianapolis, where he is the Senior Editor of The Englewood Review of Books. Chris is co-author of the award-winning book Slow Church (2014), author of Reading for the Common Good (2016), and is presently finishing a book manuscript with the working title, Conversational Bodies: A Field Guide for the Journey Toward Belonging.