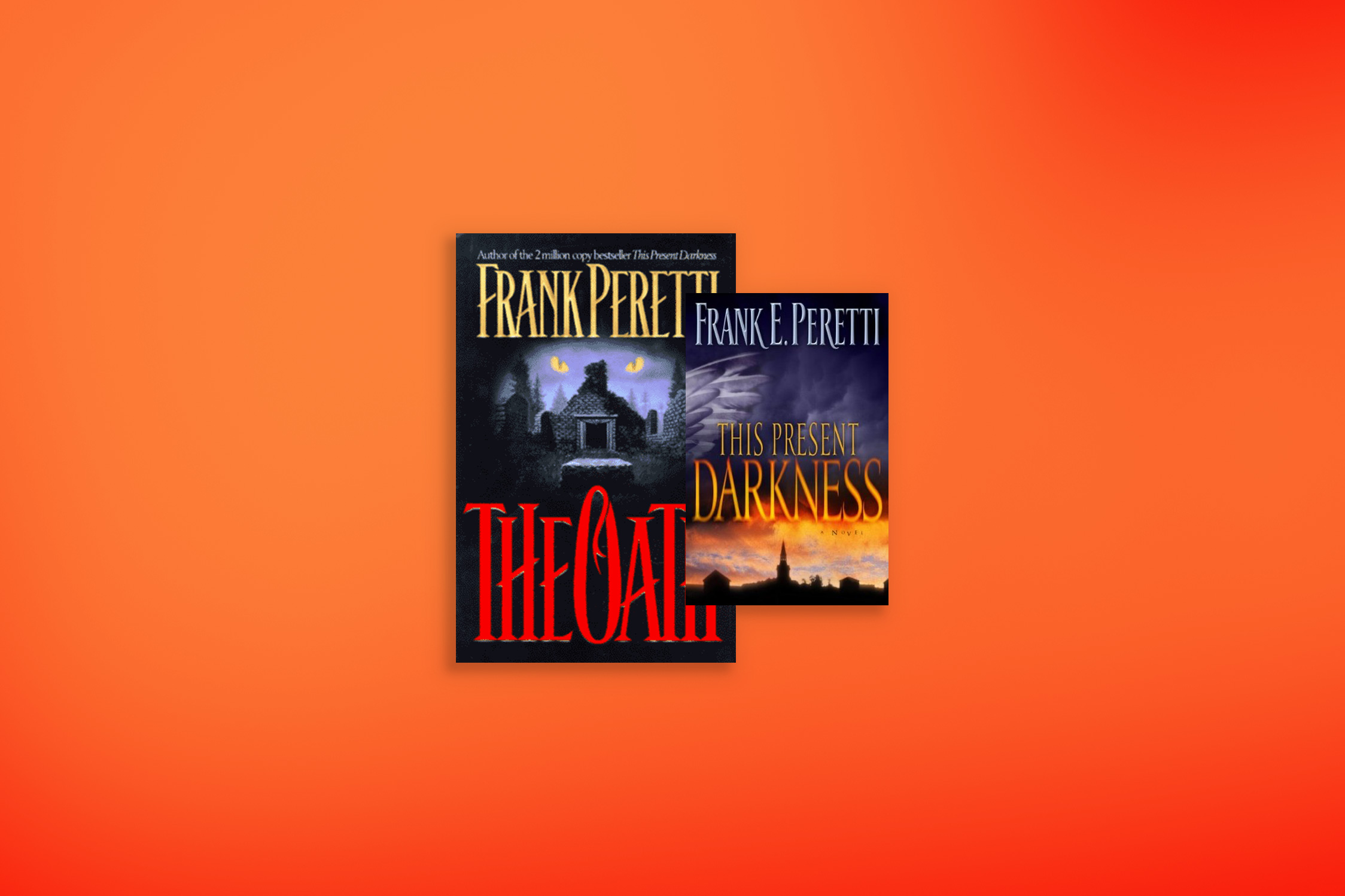 When I was a kid, horror movies weren’t part of my pop culture diet. Like many Christians in the 80s and 90s, my parents were mistrustful of the influence characters like Freddy, Jason and Mike Meyers would have on their children’s spiritual development, and steered us away from them.

Many Christians grew up in a similar way, holding horror at arm’s length. So it’s interesting how many horror movies have the exact opposite attitude towards Christianity. While horror classics like The Exorcist, Rosemary’s Baby and The Omen aren’t exactly “positive, encouraging” movies, they’re all deeply rooted in biblical theology. The relationships don’t end there. Modern horror movies from The VVitch to this year’s Netflix smash Midnight Mass are in conversation with Christianity, as is The Conjuring franchise and many of Scott Derrickson’s freaky features. Wes Craven, the late, great “Master of Horror” who created the Nightmare on Elm Street and Scream franchises, was a Wheaton grad.

And yet, for years, horror’s love affair with Christianity went unreciprocated. Except for one very notable exception: Frank Peretti.

A failed pastor making ends meet in a ski factory, Peretti became extraordinarily popular in the 1980s as the writer of books like This Present Darkness and Piercing the Darkness, which adapted Stephen King-like thrills and supernatural spooks for Christian audiences. In many of his novels, the spiritual world may be largely invisible, but it’s very tangible. Musclebound angels and terrifying demons are doing battle all around his human protagonists, with warfare both strategic (like influencing bad behavior and local politics) and literal (physical battles than can be influenced by the prayers of true believers).

These books weren’t exactly regarded as sound theology, but they sold like crazy, to the tune of over 15 million copies worldwide. In his writing, horror was a tool to motivate Christians towards prayer, taking the activities of Satan and demons seriously. And Peretti had a huge edge over horror writers like Craven and King. In the minds of many of his readers, the monsters were real.

Daniel Silliman is the author of Reading Evangelicals: How Christian Fiction Shaped a Culture and a Faith, a new book that takes a look at the fiction that shaped the Christian imagination. He talked to RELEVANT Senior Editor Tyler Huckabee about Peretti’s influence on Christian thought and the complex legacy of his books.

HUCKABEE: So help me understand the divide between the general Christian disdain for horror in the 80s and how Peretti crossed that divide.

SILLIMAN: I think there’s two things that are happening. In the ’80s, Evangelical Christians feel caught in between these two cultural trends. One is an increasing secularization, and horror turns out to be a space where Americans are open to a reenchantment. The idea of there being any religious themes in a realist novel, for example, is almost impossible. But Stephen King is doing all sorts of religious stuff, and it’s widely accepted. It’s a way to talk about otherworldly entities, and a transcendent purpose, and evil that isn’t just people being selfish, but has some ability to actually transform you against your will. I think that part of the horror genre actually appeals to Christians, and evangelicals in particular. You see this with Jack Chick, too, right?

So then Peretti’s books come onto the scene. Does that change everything immediately?

It’s Amy Grant who makes it a thing.

You have to understand that Christian fiction, as a business, had really only started in the late ’70s. So it’s only seven, eight years old at the time that Peretti is shopping around his book, which at that point is called The Heavenlies. Everything is romance novels and the idea of all the romance novels is, if you believe in Jesus and you follow the Bible, you will have the best possible life.

Peretti’s trying to sell his novel, and he’s saying “sometimes being faithful means struggling, sometimes being faithful means your life sucks, it sucks hard, and you’re failing all the time, and you need to pray.” It’s a very different idea of what belief is like in the modern world and publisher after publishers is just like, “Ah, nope, no one’s interested in this. This is not a thing. We don’t do this.”

Until Crossway picks it up. They embrace it, they publish it, they give it the much better title of This Present Darkness, but they don’t really know how to sell it. They send it out, and nothing happens.

So Peretti is actually, at this time, a failed Assemblies of God pastor, living in a trailer home on Vashon Island in Washington, and working in a ski equipment factory. Once a month, he gets a call from the publisher about how many they’ve sold and talks in interviews about it being, like, 40 books.

She’s crossed over from Christian pop star to legit pop star, she has several Grammys, she’s booking larger and larger concerts. And exactly at that time, her life is also falling apart. She’s having struggles with her husband, who has an intense drug addiction. Christians come out against her for no apparent reason, with horrible stuff, like going backstage and getting a bouquet of roses, and the note just says repent.

The secular press was also incredibly cruel to her. I found several instances where people are sort of openly having conversations about how much they do or don’t want to have sex with Amy Grant, as if this is a totally normal and acceptable just topic to have on a Tuesday. It’s really gross and really overwhelming.

At some point, she’s depressed and can’t get out of bed, and someone gives her a copy of This Present Darkness. She finds exactly the same thing I was talking about: “Oh, this is faith in struggle. This gives me a new way to just imaginatively think about how hard My life is. And what if I am struggling to get out of bed, and I imagine demons as part of that depression? Demons cheering at my struggles, and on the other hand angels, these amazing, exotic, Fabio-looking angels cheering me on?”

She really resonates with that, it really helps her, and she starts talking about This Present Darkness on stage as part of her stage patter. People immediately go from the concert to the Christian bookstore. There are lines of people at the Christian bookstore, and people start buying it like five and 10 at a time to give to their friends. That’s what launches it into bestseller status, is that moment.

I remember reading this as a kid, and it really shaped how I thought about spiritual warfare. In This Present Darkness, angels and demons fights are basically like the X-Men. It was very exciting, and I’m wondering if Peretti meant for readers to take his vision of the spiritual world as literally as many of us did at the time.

From Peretti’s point of view, demons are real, exorcism is an important part of Jesus’s ministry and should still be relevant today, and angels are real. But the point of them in the book was just to imaginatively provoke Christians, really, to prayer. There’s a version of the way the book reads that’s like: “You think it’s a political conflict? Actually, your problem is you’re not praying hard enough. If you would really pray, then you wouldn’t want to be mad at your neighbor at the school board meeting.”

So there’s definitely some elements of reality. His cosmology certainly involves demons who are active, but he did not think he was doing theological treaties. He did not think he was lightly fictionalizing what actually happens. He thought he was telling a story that was going to pull people in. But some people took it literally, and took it as a handbook.

Peretti took the concern that he was making people think that this was exactly how the world works pretty seriously. So later, some of his books actually have warnings in the front. Like, “Any resemblance to real characters, it’s purely coincidental. This is not a work of theology. This is a novel. Please engage responsibly.”

So what would you say is Peretti’s legacy in modern culture?

Peretti, like Francis Schaefer, really thought everything was God’s and everything could be claimed for God. That included different kinds of art. You could use anything. They also are promoting all sorts of different art, and encouraging younger Christians to think about art in interesting ways and engage in different styles and genres and forms. So it does have that effect, I think.

If you’re eight and read This Present Darkness, I don’t think there’s any reason that 10 years later, you’re going to run into a horror novel and think, “I can’t read this, I’m Christian.” The possibility of there being deep Christian themes in horror is totally easy for you to grasp.

But I think Peretti is a really interesting. It’s a fascinating creative moment. The effects are complicated. This is a whole world that this guy created using theology but also making a bunch of stuff up, and it’s fascinating how many people it has engaged and how compelling it is to so many people, this invitation to imagine our world filled with invisible, but very visceral things.

The thing I love about Peretti’s demons is how physical they are, and yet, also really invisible. I don’t know if you’ve ever sat in a philosophy class, but there’s always a moment in an intro to philosophy class, where someone’s like, “Imagine a pink elephant.” And then you are. And they’re like, “Is that real or not real?” And it’s this interesting, epistemological and ontological question. Peretti did that with millions of people, and also did it in a way that was super entertaining. Imagine a creepy, crawly demon behind you, right now. It’s invisible, but also it has warts.

You see that influence across a lot of other Christian art at that time. I’m thinking especially of Carman.

It also like totally speaks to that kind of fighting chief, which is not exactly new to Christianity, but it matches a certain machismo and masculinity, which [Jesus and John Wayne author] Kristin Du Mez has talked about so well. It’s really hard to imagine laying down my life for a neighbor. It’s much easier to imagine praying the demons they’re sending me away.

Reading Evangelicals: How Christian Fiction Shaped a Culture and a Faith is available here.