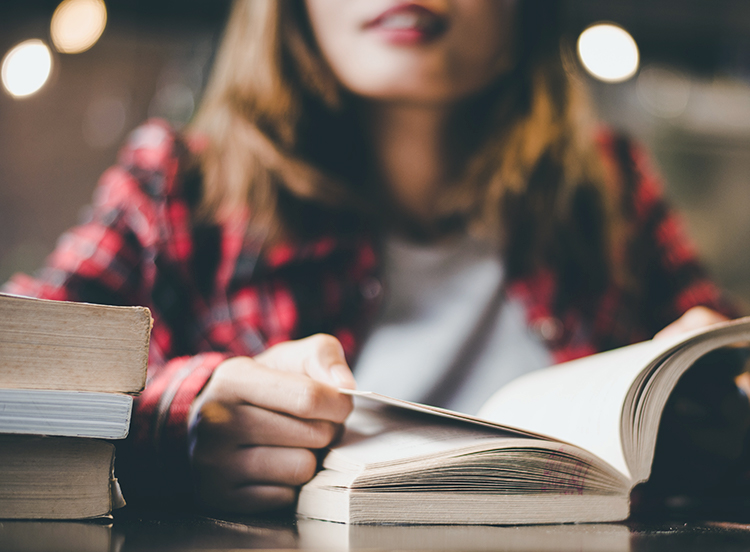 People think a lot of things about God.

Christians, skeptics and atheists alike all have their preconceived notions of who and what God really is and how He sees them.

Even those who claim they never give God a thought throughout their day are living lives that declare something about the Creator of the universe.

Everyone has formed their own paradigms about God based on experiences they’ve had with believers (whether good or bad), what they’ve been taught about God growing up, what the media says or what has been preached at them from the pulpit. When those paradigms aren’t challenged by actually digging into God’s Word to see what’s really true and asking Him to reveal the genuine nature of His character we miss out on real and dynamic intimacy with God.

While the Bible is sufficient for all teaching about God and it needs no supplement, I keep coming back to a few key books over the years that have helped shape the way I view and interact with God. I became a believer while finishing my graduate degree in Boston and these books helped shift so many false thoughts about faith I had formed over years of living apart from and skeptical of God. They’ve given me permission to restore both mystery and creativity in my own relationship with a God who “loves me with an everlasting love and draws me with unfailing kindness.”

Most of all, they’ve helped me remove God from the well-defined box that conservative, cultural Christianity is so often tempted to put Him in. I hope if you pick up just one, or all, of these books that they’ll do the same for you and inspire you to wrestle with God and ask Him more questions about who He really is.

The Cross and the Lynching Tree

Paradigm shift: “The cross and the lynching tree interpret each other,” writes Cone, drawing deeply provocative comparisons between the death of Jesus and the suffering endured by Black Americans.

James Cone passed away in 2018, leaving a legacy of rigorous theological engagement, studied biblical scholarship and a radically honest assessment of American history. The Cross and the Lynching Tree brings his various areas of expertise together into one narrative as compelling and persuasive as its heartbreaking and, frequently, infuriating. To Cone, fully grasping the meaning of the cross required “standing in solidarity with those who are powerless” and identifying with the ongoing struggles of the suffering.

“Until we can see the cross and the lynching tree together, until we can identify Christ with a “recrucified” Black body hanging from a lynching tree, there can be no genuine understanding of Christian identity in America, and no deliverance from the brutal legacy of slavery and white supremacy,” Cone wrote.

Life of the Beloved
Henri Nouwen

Paradigm shift: God’s not mad at us; He’s enthralled by us because we are created in His image. We are deeply known, chosen and loved by God and our value comes from Him alone.

Henri Nouwen wrote this slim classic as a response to a Jewish friend’s request for a book explaining the spiritual life with God in non-theological terms. Sadly, most non-Christians and even Christians have a nagging feeling that maybe God just doesn’t like them. Worse than that, many people who have been harmed by the Church’s harping on sin and God’s wrath actually think God hates them and is resigned to putting up with them. This little book exposes that falsehood and explains the reality of how God actually sees us and why we were made. It’s up to us to believe and embrace it:

Long before any human being saw us, we are seen by God’s loving eyes. Long before anyone heard us cry or laugh, we are heard by our God who is all ears for us. Long before any person spoke to us in this world, we are spoken to by the voice of eternal love. Our preciousness, uniqueness and individuality are not given to us by those who meet us in clock-time — our brief chronological existence — but by the One who has chosen us with an everlasting love, a love that existed from all eternity and will last through all eternity.

Paradigm shift: God brings beauty out of evil and ashes and redeems suffering.

Corrie ten Boom was a dutch watchmaker who loved God and became a heroine of the Resistance during World War II and a concentration camp survivor. She and her family risked their lives to help Jews escape from the Nazis in WWII Europe. She was the only person of her family who survived the death camps. Her personal account of those years and where God was in the midst of it all, is a beautiful and riveting account.

Her story shifted my thinking from, “There is no God because bad and evil things happen,” to, “In the midst of bad things, there is no pit so deep that God’s love is not deeper still.” It’s written across the pages of the Bible, penned thousands of years ago, but that story is still being told through others today; that God’s love overcomes, heals and restores.

Paradigm shift: White Americans have learned to prioritize “diversity,” but efforts to achieve it routinely miss the mark in ways that continue to deny Black Americans a seat at the table, even in the Church.

Brown’s astonishing book is more than a memoir about growing up Black in white spaces. It’s a story about how white spaces fail people of color, even when intentions may be well-meaning. Brown uses her own life story to unveil the racial complexities of American institutions from the education system to the job market to the evangelical church, why it so often alienates Black people and how God is still working to bring anti-racist justice to these spaces.

Paradigm shift: We don’t live the “Christian life” by following a set of rules or by our own efforts and strength but by abiding in Jesus himself and allowing the power of the Holy Spirit to work in and through us.

“There is something which makes Christianity more than a religion, more than an ethic and more than the idle dream of the sentimental idealist.” This short but powerful book opens with this zinger and when I first read it I knew it would change the way I saw this living relationship with Jesus that we’ve come to call Christianity. Thomas writes that the very element that makes Christianity so much more is the fact that Jesus Himself is the very content of the entire Christian faith. As Philippians 2:13 says “… for it is God who works in you to will and to act in order to fulfill his good purpose.” By the gift of the Holy Spirit, God himself dwells in us, yet so many Christians still lived in self-imposed spiritual poverty apart from the power of God.

The Language of God: A Scientist Presents Evidence for Belief
Francis Collins

Paradigm shift: Faith and science can not only peacefully co-exist but like well coordinated dance partners, they mutually support each other.

This was the first book on faith I ever read while I was still in grad school as I was trying to sort out if I really believed in Jesus — or God at all for that matter. The author, Francis Collins, was a former skeptic and self-professed “obnoxious atheist” in his younger years who became a physician-geneticist who led the mapping of the Human Genome at NIH and became a Christian in his 40s. The book presents a beautiful interplay between faith and science and helped me understand that a genuine relationship with Jesus didn’t demand that I believe that science undermines faith as I previously believed.