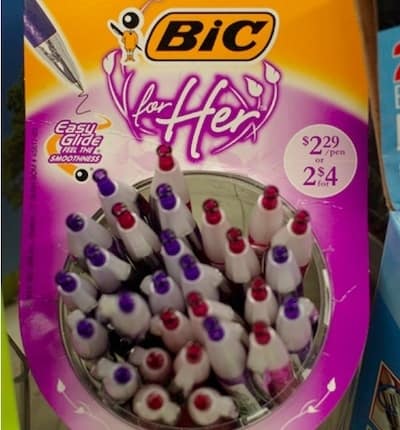 Bic’s attempt to reach out to that always-hard-to-tackle female market with a special brand of “Bic for Her” was an ill-fated move from the start. But the company has a real mess on its hands now in the form of dozens upon dozens of wonderful reviewers who’ve taken to posting fake reviews of the pen on Amazon, either mock-rejoicing there’s finally a pen women can use or mock-warning others of the perils of allowing women to write. Here are some choice excerpts:

“I had despaired of ever being able to write down said recipes in a permanent manner, though my men-folk assured me that I ‘shouldn’t worry yer pretty little head’. But, AT LAST! Bic, the great liberator, has released a womanly pen that my gentle baby hands can use without fear of unlady-like callouses and bruises. Thank you, Bic!”

“If a woman has something to say, tell a man, if its important enough to remember, we will write it down for you.”

“I don’t understand all the 5 star reviews- this is the WORST eyeliner I have ever used! I can’t get it off for the life of me.”

When the Ugliness Gets Personal