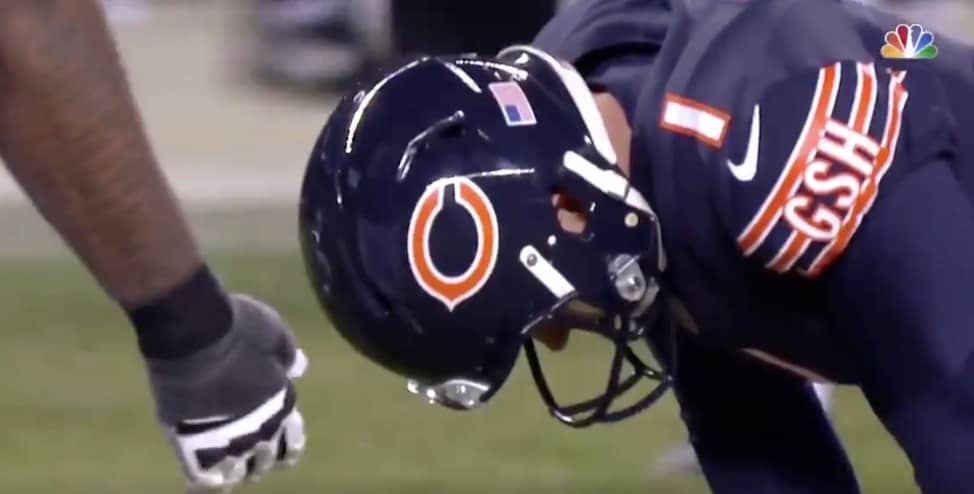 If you didn’t watch last night’s playoff game between the Bears and Eagles, than you missed one of the craziest endings to an NFL game in recent memory. After trailing the Bears for much of the fourth quarter, the Eagles rallied back to score touchdown with hardly any time left on the game clock, giving them a one-point lead.

In miraculous fashion however, the Bears were able to drive down the field to put themselves into field-goal range with just seconds left on the clock. As Bears kicker Cody Parkey kicked the field goal—sailing through the uprights for what he thought was for the win—the Eagles called their final timeout negating the first kick.

Parkey lined up again to repeat the kick, and that’s when this happened:

The ball bounced off both the upright bar and the lower crossbar, failing to go through as time expired.  It was one of the most devastating plays you’ll ever see. Al Michaels, one of the game’s announcers, literally shouted, “That’s impossible!”

However, cameras caught an interesting moment as the players walked off the field. Even after the miss, Parkey pointed toward the sky. Minutes later, he joined players from both teams on their knees for a post-game prayer.

It’s not the first time Parkey has turned to God after a rough game. Earlier this year, after a particularly bad game, he was asked if his teammates were frustrated with him. He replied, “Of course they’re frustrated with me, but who’s more frustrated than myself? I mean, this is my job, this is what I’m supposed to do, and I’m missing out there. I’ve got just to trust in what I’m doing and trust that my Lord and Savior Jesus Christ makes no mistakes. For whatever reason, that was the day I was supposed to have.”

Even after yesterday’s breathtaking lost, Parkey told reporters that it’s important to keep perspective in life, even though he felt terrible about the loss.

Cody Parkey took the postgame questions like a pro ? pic.twitter.com/JBmHSfxvh8