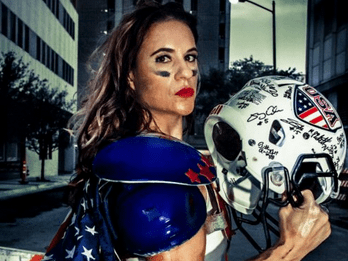 For the first time ever, a woman will coach in the NFL. The Arizona Cardinals have hired Jen Welter to be one of several coaching interns throughout the preseason and training camp. She’ll be working with linebackers and special teams players. In accepting the position, she becomes the only woman ever to hold a position on a coaching staff in NFL history. Welter has an impressive sports resume. She was the only woman ever to play runningback in the Indoor Football League, and later held a coaching position with the team. She also has a master’s in sports psychology and PhD in Psychology from Boston College, where she played rugby. And, for more than a decade, she was part of the Woman’s Football Alliance league. Cardinals coach Bruce Arians told The Arizona Republic, “I wanted to open that door. Coaching is nothing more than teaching. The one thing I’ve learned from players: all they want to know is ‘How you going to make me better? … I really believe she’ll have a great opportunity through this internship to open some doors.”

The Roots of Christianity’s Pro-Life Stand