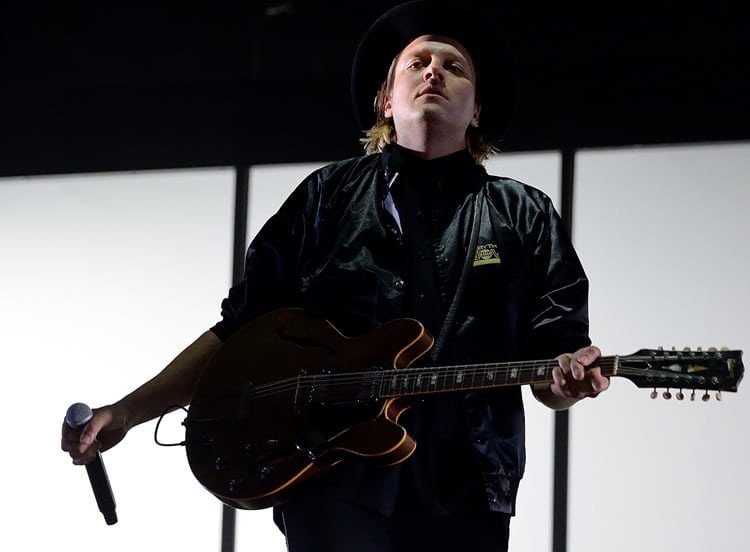 At this point, there’s a case to be made for Arcade Fire as the most important band in the world.

Bear in mind that it’s been 13 years since the Montreal collective burst into the pop lexicon, with the debut Funeral earning them rave reviews a cosign from Bruce Springsteen, even a cover on the Canadian edition of Time.

Husband and wife duo Win Butler and Chassagne fronted a six-musician crew of multi-instrumentalists twisted and turned through the agony and grief of losing several relatives of band members, and the political and personal turmoil of Chassagne’s native Haiti. In pop culture, anything over a decade might as well be a century. These guys have more than proven their staying power.

In 2007, Arcade Fire sidestepped the curse of the sophomore record with Neon Bible, universally lauded by critics and fans alike. In 2010, the Canadian collective shot into the stratosphere with The Suburbs, expanding the sound to back Butler’s poignant lyrics on growing up in the Houston suburbs, land of four lane highways and strip malls. At the 53rd Grammy Awards, Arcade Fire pulled a massive upset and shocked the world by taking home the hardware for Album of the Year over Eminem, Lady Antebellum, Katy Perry and Lady Gaga.

Arcade Fire’s peers in contention for the “voice of a generation” title during the Bush Administration have slowly fallen away.

John Mayor has never been able to recover from his racist and abhorrent interview comments to write anthems in the vein of “Waiting on the World to Change.” U2 is on tour playing 30 year old songs. Coldplay seem to be confused about whether or not they are broken up, breaking up or continuing to make music. Adele and Beyonce have found massive audiences in the age of the who’s-cool-this-week streaming era, but both 25 and Lemonade are more focused on a personal journey than a societal one. And so, almost by default, we look to Arcade Fire to show us the state of the world in 2017. Whether or not the deliver will depend largely on your musical pallet and willingness to dive into the cultural critique of Butler and Co.

Now that music cycles like fashion, the 90’s are coming back in style. This is equally true of the oversized Adidas jerseys for sale at Urban Outfitters and in the fact hip-hop is going through a post punk phase (for more on this, Spotify Vic Mensa, Denzel Curry and Lil Uzi Vert for starters), Arcade Fire is running the other direction. Specifically, back to the disco vibe of the 1970’s.

Arcade Fire first ventured down the EDM lane back in 2013’s Reflektor with the help of LCD Soundsystem’s James Murphy. It was a bold move which produced divisive results, the first cracks in a band that the public and critics alike thought could do no wrong.

This time around, Arcade Fire pull inspiration from disco legends Abba, Jamaican rock steady, and even Huey Lewis and the News.

At times, it’s a tough concoction to get down, but it also takes a lot of backbone to try to pull off. Sonically, the result is a brave, if notably imperfect, effort at originality that will likely be a point of debate between the Arcade Fire faithful and general music fans for the rest of 2017.

While there’s no doubt that artists should push into new territory, many listeners may wonder why their favorite indie rock band seems to be leading them through this particular soundscape, which at times feels like the backing music to the 1971 action movie Shaft.

Lyrically, it’s a positive that Arcade Fire try to write albums around a few key ideas and themes. This time around, the band turns their attention to materialism.

This is an album written for a world where fame is earned on Instagram and dates are made by swiping right. Since they first formed in a post-9/11 world, it’s also the first album Arcade Fire has written in a year with a truly strong economy, where one way to confirm the aforementioned Instagram fame is to share shots of your $800 Gucci Flip Flops.

Butler’s sentiment is right here, even when the execution doesn’t land. We’re entertaining ourselves to death. Modern culture is obsessed with fame. And as a culture, it’s rotting us from the inside, even as we flash our teeth in huge smiles for social media.

It’s also an album that talks about God. A lot. Butler also has a fascination with Biblical imagery here that hasn’t been present in past projects. “Love is hard sex is easy. God in heaven would you please me” he yelps on “Signs of Life.”

Unfortunately, the pieces don’t always add up to a cohesive whole. The most glaring problem from the first listen is that Chassagne’s vocals, a highlight of everything the band has done so far, are recorded in a way that makes them unintelligible this time around. If you want to know what Regine is singing about, you’re going to have to listen while Googling the song lyrics.

Because “Everything Now” is a a dance record that’s tries to be deep, working really hard to try to say something important while also aiming for the cheap seats for the upcoming world tour. If the job of an artist is indeed to look at the world and describe what they see, Everything Now is Win Butler’s overly ambitious all night term paper, an attempt to mix social commentary with disco, the state of American culture with a club beat.

Whether it’s a beautiful mess or just a mess will likely depend on how much you love the Butler/Cassagne songwriting team, and your willingness to follow the duo down the rabbit hole of this latest chapter of Arcade Fire.