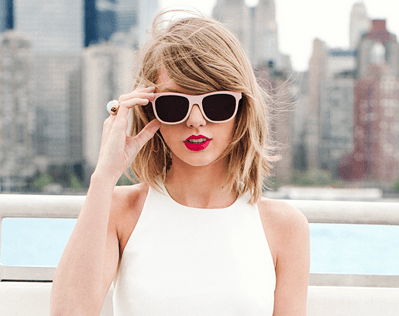 Taylor Swift is officially the most powerful person in the music industry: With a single blog post, she was able to make one of the world’s most powerful companies reverse course on a major business decision. On Sunday morning, Swift—who has been vocal about her opposition to low royalty rates paid to artists by streaming services—made a post to Tumblr, announcing that she would not be releasing her new album, 1989, to Apple Music when it goes live this summer. She wrote,

I’m sure you are aware that Apple Music will be offering a free 3 month trial to anyone who signs up for the service. I’m not sure you know that Apple Music will not be paying writers, producers, or artists for those three months. I find it to be shocking, disappointing, and completely unlike this historically progressive and generous company … We don’t ask you for free iPhones. Please don’t ask us to provide you with our music for no compensation.

It looks like the impassioned open letter—written on behalf of “every artist, writer and producer in my social circles who are afraid to speak up”—worked. Hours later, Apple executive Eddy Cue tweeted “#AppleMusic will pay artist for streaming, even during customer’s free trial period … We hear you @taylorswift13 and indie artists. Love, Apple.” In response, Swift tweeted, “I am elated and relieved. Thank you for your words of support today. They listened to us.” Apple haters gonna hate, but no one crosses Taylor Swift’s friends and gets away with it.

We’ve been hearing a lot of concern from indie artists about not getting paid during the three-month trial period, which was never our intent. We never looked at it as not paying them. We had originally negotiated these deals based on paying them a higher royalty rate on an ongoing basis to compensate for this brief time. But when I woke up this morning and saw what Taylor had written, it really solidified that we needed to make a change. And so that’s why we decided we will now pay artists during the trial period and we’ll also keep the royalty rate at the higher rate.

Cue explained that Apple will eat the cost of the 90-day trial period: “We’re certainly paying for it yes. We’re all in. But we view this as: music is a part of our DNA—we talk about it a lot. We love music and we’ve always strived to have great relationships with the music community and we have a deep respect for what they do. We’re in this for the long term.” …

The Gospel is Not Clickbait