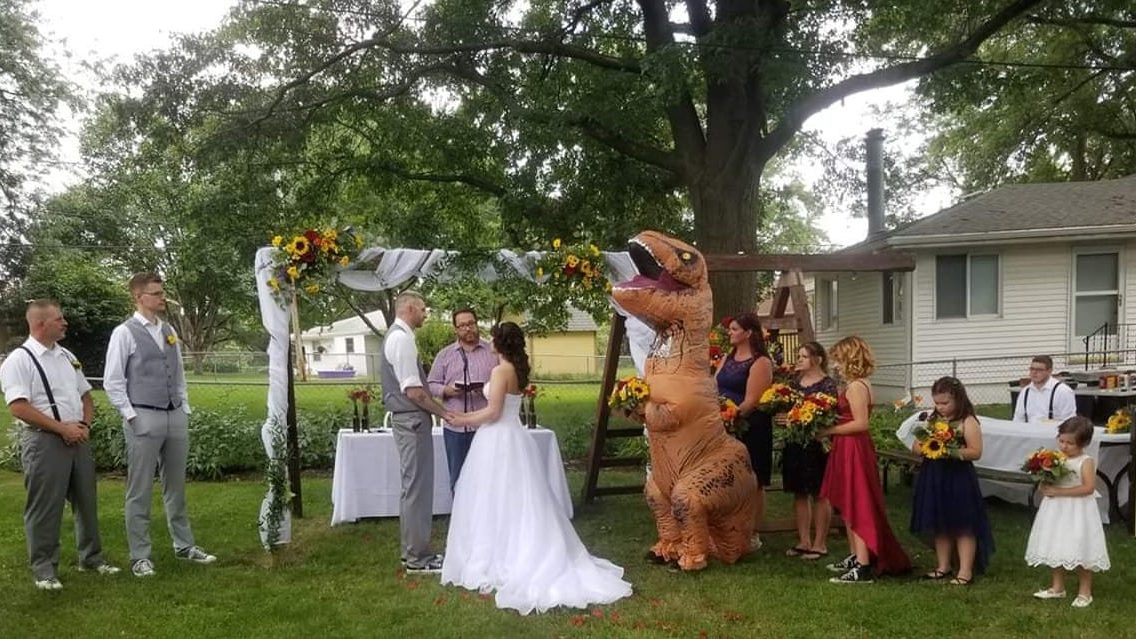 What is a hero? Someone who puts themselves in harm’s way to protect others, yes. Someone who stands up and speaks the truth to powerful people regardless of the consequences, of course. But at its essence, a hero is probably no more than a person who makes the best possible choice at the right time and in that regard, Christina Meador is a hero. Maybe the best one we’ve got right now.

When told by her sister, the bride, that she could “pick any outfit [she] chose” to the wedding, Meador took the instructions very literally and wore not only what she wanted, but the only thing anyone ever really wants to wear: a tyrannosaurus rex costume.

Keep reading, because each detail here is better than the one before. According to The Daily Mail, Meador’s decision was the result of what sounds like a very thoughtful conversation with her sister.

“She, knowing that I’m not a big fan of wearing formal dresses and that I probably wouldn’t have a lot of money to buy something really nice, reassured me by letting me know that I could pick out any outfit that I choose. I was trying to think of something that I would be willing to wear more than once and thought to myself, ‘Well, she did say anything, and if I’m spending more than $50, I want it to be a dinosaur costume, because they’re fantastic and I’ve always wanted one.'”

“Well, she did say anything.” Incredible. Truly amazing. “Your Honor, let the record show that my sister clearly said ‘anything.'” Of course, the photo was posted to Facebook where some haters tried to take Meador to task for “ruining” (what?) her sister’s big day. And who should come through to defend Meador but the bride herself!

“It’s not a joke, it’s a giant middle finger at spending thousands of dollars and putting ungodly amounts of pressure on ourselves just to please a bunch of people who, in the end, only want free food and drinks. The point was to get married to the man who treats me like I hung the moon, and we did that part. My sister is awesome and I genuinely was not kidding when I said she could wear whatever she wanted.”

Yes, there are two American heroes here. One, the woman who had the courage to wear a dinosaur costume to a wedding. The other, the bride herself, who knows a good thing when she sees one. The groom is a very lucky man. Everyone in this story is very lucky. Congratulations to the bride on her special day. Congratulations to the maid of honor on her new dinosaur costume, which she can wear again and again as a constant reminder that this world is full of heroes, if you only know where to look.

The Importance of Persistent Friendships

6 Lies You Need to Stop Believing About Your Calling