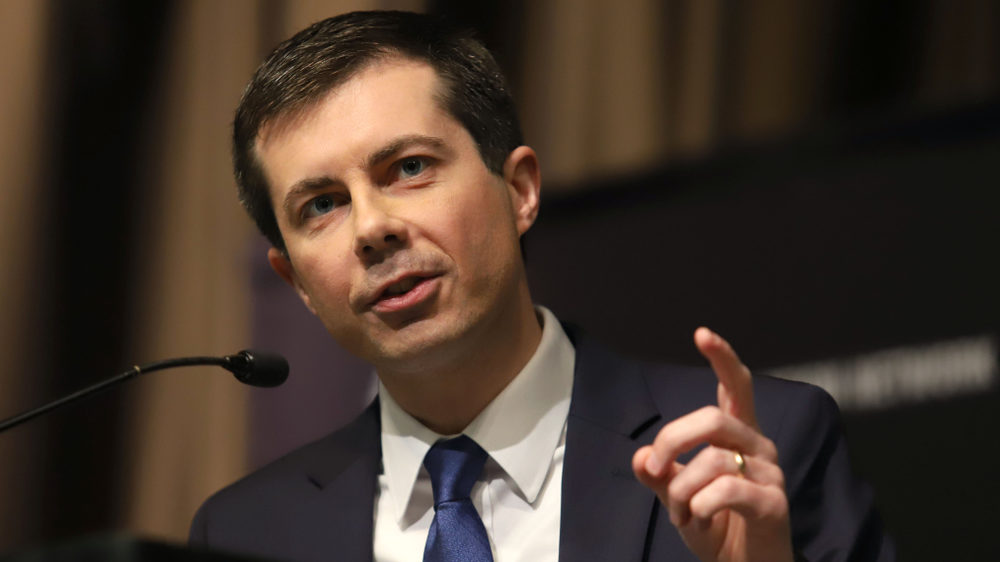 On Thursday, the major Democratic candidates gathered in Los Angeles for a forum on LGBTQ rights, each bringing an aggressive agenda promising to end workplace discrimination and guarantee health benefits for America’s LGBTQ population. Given the role faith plays in the ongoing debate in the U.S. over LGBTQ equality, it’s not surprising that faith was a regular subject of conversation. Here’s how it came up throughout the evening.

Pete Buttigieg is the first major gay candidate for the Presidency in U.S. history and has also made his religious faith a key part of his campaign. His calls for tolerance were interrupted by activists who sought to call attention to an issue of growing concern among the LGBTQ community: the rash of murders of black transgender women.

Buttigieg’s LGBTQ Policy Plan explicitly addresses how he plans to balance a push for LGBTQ rights with the preservation of religious liberty. On Thursday night, he explained it succinctly, saying “The right to religious freedom ends where religion is being used as an excuse to harm other people.” Buttigieg’s plan is to “examine existing religious exemption policies in the federal government” and reconfigure “offices that were put in place to enable discrimination.”

Buttigieg spoke of his faith when asked what Bible verses he used to explain how he treated LGBTQ people.

“The Christian tradition that I belong to instructs me to identify with the marginalized,” Buttigieg said. “Religious liberty is an important principle in this country and we honor that. It’s also the case that any freedom that we honor in this country has limits when it comes to harming other people.”

“When religion is used in that way [to discriminate against LGBTQ people], to me, it makes God smaller,” Buttigieg said. “It to me is an insult, not only to us as LGBTQ people, but I think it’s an insult to faith to believe that it could be used to hurt people in that way.”

Elizabeth Warren got a lot of attention for a viral zinger. When a member of the audience asked what her response would be a supporter told her “my faith teaches that marriage is between one man and one woman”, Warren quipped “I’m going to assume it’s a guy who said that, and I will say, then just marry one woman. Assuming you can find one.”

Warren then spoke about growing up in a conservative religious household and talked about how her Methodist faith has made her more accepting of the LGBTQ community, singing a brief cut of “Jesus Loves the Little Children of the World.”

“The hatefulness always really shocked me,” she said. “Especially for people of faith, because I think the whole foundation is the worth of every single human being.”

Warren’s LGBTQ+ Rights and Equality Plan also addresses religious freedom, stating, “The freedom of worship is a core American value. But the Trump White House has weaponized the language of religion by giving federal agencies, government contractors, and grantees a license to discriminate against LGBTQ+ people, as long as they claim they discriminated for a religious reason.” The plan says that “Religious liberty should not be used to shield bigotry.”

The moment of the night that may cause the most concern for conservative religious groups came from Beto O’Rourke. When asked if he believed religious institutions like “colleges, churches, charities” should lose tax-exempt status if they oppose same-sex marriage, he responded “yes.”

“There can be no reward, no benefit, no tax break, for anyone, or any institution, any organization in America that denies the full human rights and the full civil rights of every single one of us,” O’Rourke continued.

This drew cries of concern from religious leaders on social media. Denny Burk, President of the Council on Biblical Manhood and Womanhood, wrote that O’Rourke’s view “means that we have an entire political party that is directly arrayed against Christian churches that remain faithful to Christ … for now.”

National Review writer David French tweeted “Rarely have I seen a candidate commit so completely to running against the Bill of Rights.”

Despite a strong initial push following his close-but-no-cigar run against Senator Ted Cruz in Texas, O’Rourke has languished in the polls for the entirety of his presidential run.

A Wedding Videographer Added Muppets Footage to a Couple’s Video Without Asking, and We’re Here for It

Watch Lauren Daigle Bring the House Down on ‘Seth Meyers’