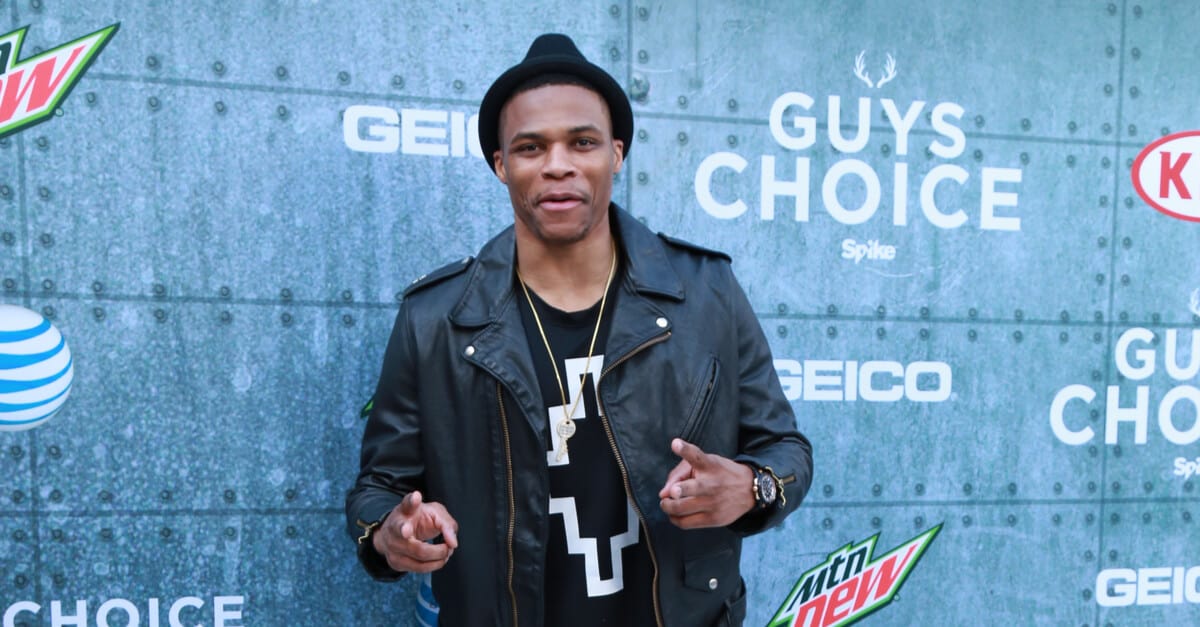 The video, too laced with profanity to share here, shows Westbrook telling the fan he would “f*** him up.” Westbrook directs the comments at both the fan and the fan’s female companion. As the story broke, many thought Westbrook had overreacted to some simple trash talk, but as more players and witnesses came forward about the incident, things grew more complicated.

Westbrook: “The realization of it is, how it started was, a young man and his wife in the stands told me ‘to get down on my knees like you used to.’ To me, that’s just completely disrespectful, to me, I think it’s racial, and I think it’s inappropriate”

While the fan has said he didn’t say anything inappropriate toward Westbrook — he said in an interview he just told the guard to “ice those knees up” — witnesses to the exchange, as well as Westbrook himself, said the fan told the player to “get on your knees like you’re used to.” When sought for his side of the story after the game, Westbrook said the jab was “completely disrespectful” and “racial.”

The Jazz investigated the incident and concluded Westbrook’s version of events, which accuse the fan of a racist and possibly homophobic taunt, were true. Several other players supported Westbrook’s story as well, including players on Utah, like reserve guard Thabo Sefolosha.

Though the results of the investigation might confirm Westbrook’s story, he wasn’t entirely excused for his profanity and his threat. The guard was fined $25,000 for “directing threatening language to a fan.” Meanwhile, the fan himself, identified as Shane Keisel, is banned from attending Jazz games for life.

This might be seen as a one-off incident, but the NBA players involved are using this to speak on broader patterns in the way fans interact with players. Players like Jazz guard Donovan Mitchell and Jazz center Rudy Gobert voiced their solidarity with Westbrook, explaining NBA arenas, organizations and the league itself need to prioritize protecting its employees from hate speech.

“I am personally hurt by the incident at the game on March 11th. As a black man living in a community I love, and playing on a team that gives me the opportunity to live out my dreams, this incident hits close to home. Racism and hate speech hurts us all, and this is not the first time something like this has happened in our arena. The Utah that I have come to love is welcoming and inclusive and last night’s incident is not indicative of our fanbase. We don’t want to create a negative reputation for athletes who potentially may want to come to Utah.

“I want to thank my team and the NBA for quickly responding to this hateful incident, and for helping to make our arena a place where all fans and players are welcome. I join other players in calling for all teams to take a stand. We should not be subject to hate speech or racist acts at any time, and definitely not in our arenas.

“Over the coming months I will work with the team, my teammates and the league to help make our arenas and our communities more inclusive and welcoming. That includes bans on hate speech and racism.”

For his part, Gobert spoke about the way people perceive professional athletes. He explained that while fans might see NBA players as multi-millionaires lucky to have the privilege of playing a game for lots of money, that doesn’t give them the right to abuse players, provoke players or harass them in any way. He’s seen fans reach out and touch players before; it actually happened to Westbrook earlier this season in Denver.

“It’s really important that we hold those people accountable, because at the end of the day, those kids are the future of this country and the future of the world. We have to show them what’s right.”

One Book to Help You See Beyond Your FOMO